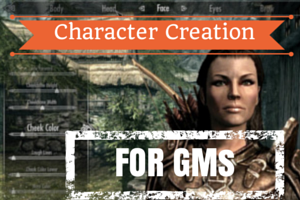 Picture your group before the start of a new game, when pencils are freshly sharpened and character sheets are crisp and temporarily free of pizza stains. The players are eagerly passing the rule book back and forth, or immersed in the PDF on their tablet. Whatâ€™s the GM doing? Eating pizza, drinking a beer, and staring off into space day dreaming of a killer campaign?

Sure, thatâ€™s one way to do it. And really thereâ€™s no wrong way to start a new game session. But at the head of the table the GM is in a completely unique position to help their players get the most of the game, and the first step is helping them make the best characters they can. Character creation shouldnâ€™t be the sole responsibility of the players! GMs, read on for my top three tips on how you can (and should!) be involved in character creation.

You have a bird’s eye view – use it

Players can be awfully myopic, so focused on making the coolest character ever they have no idea what else is happening at the table. Don’t check out while your players are babbling excitedly. Listen in, and start piecing together how these characters fit together. And if they don’t, you donâ€™t have to force it! If someone is making a grimdark character for your comedy game, have a quick chat with the player. They may be so focused on this awesome gritty character that theyâ€™ve barely heard the shenanigans going on around them. Step in earlier rather than later to help keep character creation moving along smoothly.

Don’t let them forget something important

Sure, the flat broke Demons were hilarious to listen to, but how much time was wasted in and out of character trying to overcome a relatively minor mistake in character creation? Talk about breaking cover! Take a minute during character creation not just to look at where players may have added wrong or took a game-changing power, but also check out what’s missing. Is it an investigative game and no one actually took investigation? will the final battle be against a ghost but everyone relies on their fists in combat?Does everyone’s backstory say they should be comfortably middle class but the character sheets don’t back it up? Help your players out and tell them to fix it. If it relates to the plot, you don’t have to tell them why beyond “reasons.”

A core tenet of games powered by the apocalypse, I can’t think of a system that wouldn’t benefit from this rule. The GM should be the party’s number one fan. This doesn’t mean you don’t want drama and conflict, but it’s there to help the characters be more well rounded and grow as people (Orks, man eagles, etc). Stories you create should prop up the characters, help them be more awesome, and give them opportunities to show off exactly how they are awesome. The GM does a lot of heavy lifting, but at the end of the day, the story isnâ€™t about you and how messily you crushed your characters (unless everyone is into that. No judgment at the â€˜Affle House).

How do you help your players create characters when youâ€™re the GM?