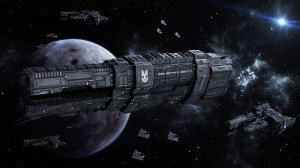 I donâ€™t know if it is from the imaginary tumor I believe is crushing into the back of my skull or the lack of caffeine. It could be from the fact that Iâ€™ve been staring way too long at a computer terminal or maybe Iâ€™ve not stared enough into one. Or perhaps it was just allergies, sickness, or the result of voodoo.

Though… I donâ€™t think Iâ€™ve offended any Shamans as of late….

I lay in my bunk now. My bunk on the forty seventh level of the forty seventh ship that makes up the remenents of humanity. If my room had been forty-seven, Iâ€™m sure that would have been a sign that I was meant for great things. Instead, my room is number forty-six. Close, but no cigar.

Berk calls from the bottom bunk, his foot coming up to kick at the underside of my mattress. I do my best to ignore him.

â€œAlon- Dude, I know youâ€™re awake,â€ Berkâ€™s voice claims, another kick being delivered. This is enough to cause me to roll to my side, sticking my head over the edge. The room is dark but Iâ€™ve been here for awhile. I make out his dark features, his dreads, and those stupid goggles that he claims bring him luck. He sees me and he grins. â€œI knew you were awake.â€

â€œI was sleeping,â€ I reply.

â€œLubed oil you were sleeping,â€ he says as he reaches for something on his bed I canâ€™t see. â€œI got you somethinâ€™.â€

â€œFor my birthday?â€ I ask as I already know the answer.

It was, in fact, my birthday.

â€œNo, itâ€™s because youâ€™re life is shit and I want to shower you with happiness,â€ Berk answers as he brings his hand back into view, it holding a package. He offers it up to me, and I take it.

I open it and find a pair of goggles waiting for me. Identical to the one Berk is wearing right now.

I want to smile but my headache decides for me. Instead, I wince, pluck the goggles from the box, and return to my pillow. I run a finger over the tinted lenses. I do this for no reason other than my fingers are free and my mind is bored. Berk doesnâ€™t bother asking if I like them or not. He knows the answer.

I try not to think of the usually things that I think of during the nights. I try to not wonder how many humans are left and if itâ€™s plausible for us to actually hold enough genetic diversity to carry on as a species. I try not to focus on the fact that weâ€™ve lost our planet to the Ghosts and that they were out looking for the rest of us.

It is odd. When fiction starts hunting non-fiction, which one is considered real?

As a kid, I always preferred the darkness. I would climb through the pipes and vents of the fuel station my parents worked at. Iâ€™d wiggle through any gap and clog that I could, under the grating tiles and over the metal plating. I would be lost for hours, left to the darkness and the voices Iâ€™d overhear above me.

Of course, I followed my parentâ€™s footsteps. I became a fuel-technician which was just a fancy way of saying gas pumper in space. Before the great shitstorm which was the Ghosts, I worked a thankless job pumping fuel into any ships passing Uranus. When the Ghosts took Earth, I was made to work a thankless job pumping fuel into any ship of the fleet.

I know this because I hear him say â€œIn your face, Ghost-Pussâ€. We all have our ways of dealing with the unseen creatures that took our home. The unseen phantasms that attacked with warning.

No threats. No negotiations. No ships. No hint other than people began falling over dead. Buildings began falling. Ships began exploding.

The only reason we knew we were attacked by sentience was their only message as a handful of humanity fled into the Great Unknown. As we rounded Pluto, a simple message was heard by us all. Not through the comm or through the speakers.

â€œYou will not escape your specters.â€

We all saw different images after that. Some claimed to see an explosion just before darkness engulfed them. Berk said he experienced being set on fire and running through a habitat ring before falling over dead. Everyone saw something. Everyone saw their death.

Everyone except me: I saw nothing.

When everyone was on the floor, screaming in horror, I just remained standing in place. No vision. No nothing. Just me experience everyone elseâ€™s horror.

When asked, I just say I saw myself being sucked out of a hull breach.

Iâ€™m not important enough for people to second guess.

3 comments on “A Normal Night”