An Anthropological Study of the Peoples of the Hollow Earth

An Anthropological Survey of the Peoples of the Hollow Earth 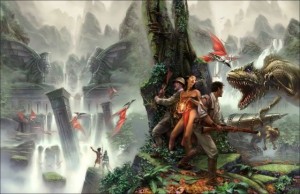 Dedicated to Her Majesty Victoria, by the Grace of God, of the United Kingdom of Great Britain and Ireland Queen, Defender of the Faith, Empress of India.

Tracking the hours, the days, the weeks – these measurements of modern civilization are unfamiliar to many of the natives of the Hollow Earth. Though their ancestors may once have worshipped the rising sun or migrated with the changing seasons, in this place of perpetual daylight and unchanging climate, the need for such tracking has fallen away.

As reported in previous entries, the peoples of the Hollow Earth have a strange predilection for choosing members of the weaker sex to lead their tribes. This habit crosses even species barriers, crossing over between humans, ape men, and allegedly the bizarre mantis men. Even tribes that have no record of matriarchal societies in traditional historical fact, such as the remnants of the Roman legionaries I ran into…several months ago now, have adopted at minimum egalitarian notions, allowing their women to make decisions alongside the menfolk.

I was naturally curious as to what caused such a dramatic shift in governing styles, as so many of these female creatures have adopted masculine forms of dress and title as they have assumed roles traditionally above their station. Through careful observation – weeks? Perhaps several months – and interaction, I believe I have found the root of this natural perversion.

To the citizens of Her Majestyâ€™s vast realm, the Amazons of ancient Greek myth are merely figments of a lesser societyâ€™s imagination. A flight of fancy, an exotic villain to pit against the great heroes of myth. But it is my belief now that the myth originated in fact – and the reason modern peoples have found no evidence of these vicious warrior queens is they migrated en masse into the depths of the Hollow Earth.

Described as savage fighters in myth, the Amazons must have brought the same fierceness to the Hollow Earth, entering as conquering warriors. Catching the largely un-militarized natives by surprise, the Amazons were able to subjugate the masses and reign as queens over men. It is unclear why they must have retreated from this position, for if they were overthrown by later warlords surely society would have corrected its course. Instead, today the Amazons live a largely solitary hunter-gatherer lifestyle, allowing men into their encampments for purposes of coupling and many of the household duties held by women elsewhere. In the Amazon tribes, it is the men who tend the cookfires and attend to the infants, while the women, and even girls, hunt the savage beasts of the jungle. I was accepted among them only after assurances that I was not armed, and not only offered tea as a peace offering, but brewed it personally for Queen Hippolyta XIV.

Around the cookfires, the men began to share the great creation myths of the Amazons, passed from generation to generation, stories that were obvious propaganda as they painted the Amazonian settlers as peaceful farmers. I was exiled after sharing with these men our own creation myth and the story of Eveâ€™s creation from Adam. A more terrifying sight this humble servant of Her Majesty has yet to experience, than half a dozen armed female warriors approaching with spears at the ready. I was lucky to escape with my life.

Fandible will be at Origins this weekend! Be sure to follow us on Twitter for our weekend adventures. And don’t forget, you can help send Fandible to more cons by supporting us on Patreon.