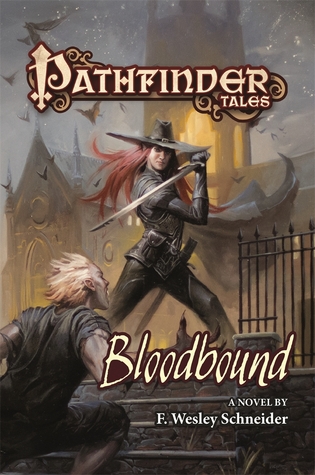 When news of the release of a new Pathfinder Tales title reached Fandible,Â I snapped at the chance to be the first to readÂ BloodboundÂ by F. Wesley Schneider. Already a fan of some of the books in series, such as Death’s Heretic and Queen of Thorns, it was a great chance to catch another glimpse into the world of Golarion. It was also a chance to see what the author’s take on the universe would be.

Every author brings his or her own take to these Pathfinder Tales novels. With Death’s Heretic, it was an exploration of a few of the bizarre magical dimensions and concepts that comprised the Pathfinder universe. With Queens of Thorns, it was a more traditional fantasy adventure. Bloodbound takes an even stranger, but still enjoyable, twist: a gothic fantasy buddy cop film.

Now, any good buddy cop film only works if the dynamic between the two main protagonists is entertaining. This entertainment is usually brought about by the tension between two wildly different characters. Their clashing personalities or quirks causing misunderstandings, heightened voices, and potential violence. All of which are brought up in the dialogue and actions of the two main female protagonists of Bloodbound.

On the one side is Larsa, the Dhampir Accuser, Â playing the role of the old cop who has, in the eternal words of Danny Glover, become much too old for this crap. Â Dealing with the worst of the politicking and corruption her city has to offer, she is rude, brash, and more than willing to use violence to get her way. Her bitter attitude towards her job making her resort to using the quickest way possible to get it all over with. And, when dealing with vampires, that usually involves wooden stakes and a lot of blood.

In contrast to her is Jaiden, an optimistic priestess of the Death Goddess Phasrasma. She is much more soft spoken then the more violent Larsa but her naivete forces her into situations that some would consider rather deadly. That combined with the fact that her goddess wishes to kill all undead on sight brings about an awkward conversation or two between her and her half-undead companion. Add in a zealous superior who considers her too weak for her job and you have fertile grounds for a major inferiority complex.

As the story continues, we get a taste of the horrors that pervade the unwholesome city they call home. The protagonists differing opinions on the matter leads to even more potential conflict. Pessimistic attitudes and optimistic hopes clashing into a mess of trouble that they dive into head first. That combined with a personal revelation or two and the unfolding mystery of a brutal massacre leads to an entertaining read.

If you’re looking for a darker tone to your high fantasy, I would really recommend this book in the Pathfinder Tales line.

A copy ofÂ Bloodbound was provided to Fandible by the publisher in exchange for a review.Â Bloodbound is now available.

In addition to the new novels, you can follow further Pathfinder Tales adventures at PathfinderTalesNovels.Com, where four authors are recording their own role playing adventures in Golarion.