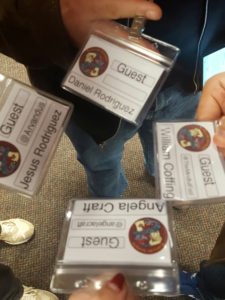 Over the weekend,Â Billy, Dan, Jesus, and I made a road trip to Ohio to attend AcadeCon, the gaming convention organized by the RPG Academy podcast. While the days leading up to the con were some of the toughest days Iâ€™ve had with lots of wondering â€œwhat do I do next?â€ going to the con was the perfect cure for the post-election blues.

Thursday morning we dropped the dog off at the boarder’s first thing in the morning, then set off on our cross-country trek. Way too much Arbyâ€™s was consumed, but we discovered Danâ€™s 90â€™s-music-fueled superpower along the way. 12 hours later, we arrived at Billyâ€™s parents place (yay free lodging!) and crashed for the night.

The real adventure began at noon on Friday, when I got to kick off my con experience by GMing my Lois Lane Bubblegumshoe game for four fabulous players. I was nervous as hell going in, partly just from general con nerves (you never know whatâ€™s going to happen), and because it was only my second time running the system (you all know my first time as Veronica Base, Mars). I based the characters on Gwenda Bondâ€™s YA series about teen reporter Lois Lane, and had the group investigate what turned out to be Cadmus performing illegal experiments on a teenage athlete with a tragic back story. I knew it was going well when said-backstory was revealed and one if the players said, â€œWell, now I feel awful.â€ Happy first-game-at-AcadeCon?

Meanwhile, the rest of the crew had a chance to play Part-Time Gods of Fate, which sounded like a lot of fun and will possibly be appearing on Fandible in 2017 (wow, the new year is so close!).

I had a large gap in the afternoon because I never got my Hollow Earth Peggy Carter game off the ground, which is a tragedy. But it did mean I actually had time for dinner with the rest of Fandible before my evening game of 10 Candles started.

10 Candles is an amazing horror game with some of the most interesting, but dead simple, mechanics Iâ€™ve seen in a long time. The game uses a pool of 10 d6s. In round 1, all 10 of those dice belong to the players. In each subsequent round, one die goes to the GM. If the GM rolls more or equal to the number of 6s a player does, the GM gets to take narrative control for that roll (bad stuff usually happens, of course). The game is designed to be played in the dark with the titular 10 candles providing the only light (with one candle being extinguished after each round), so a bright, noisy convention hall wasn’t the ideal environment, but it was still spooky as hell. This is another game I can’t wait to bring to Fandible; weâ€™re just trying to figure out how to physically accomplish it considering recording equipment + fire = ~sad trombone~ 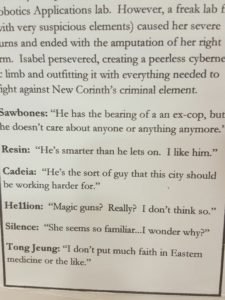 Saturday morning, Dan, Billy, and I played a demo of Cold Steel Wardens, a superhero game from Blackfall Press,Â designed for lower-powered characters. The module was fun, with some very good characters, but the table was packed which I think lessened the impact of being low-level supers. But thereâ€™s a strong possibility it will join our large collection of superhero gaming books along the line. Plus, you should ask Dan how the system worked when it was used for a Mad Max-style Avatar adventure.

Saturday afternoon I ran my last game of the con, End of the World! This game filled up within 15 minutes of registration going live last month, which just shocked me. But when I met the players it did make a little more sense, as one of them was actually a Fandible listener! He brought two friends, and the fourth seat was taken by someone who had read the Zombie Apocalypse book but hadn’t played yet (and coincidentally had been in my Lois Lane game the day before). I decided basically at the table to run Gaea’s Revenge, after asking everyone to tell me if they had any hard “nos” for horror games. Running the game with non-Fandible people was a trip. They didn’t visit Sammy’s! A player was a good person and stayed with an injured cabbie in the face of a tornado! Cats and dogs, living together.

Everyone else had games for the rest of Saturday night, so I spent some time socializing. I spoke for a few minutes with Ken Hite who had spied briefly on my Bubblegumshoe game. I tried very hard to keep my cool and not fangirl too hard. I also very briefly met Senda of Sheâ€™s a Super Geek, and the one and only Darcy Ross. There were hugs and squees all around.

On Sunday, the rest of Fandible kept double checking that I was actually in the right games. Because Sunday was back-to-back D&D sessions. First was a 5e adventure through an abandoned temple, and was the first game all weekend all four attending members of Fandible were able to play together. The GM had crafted an awesome puzzle for us that resulted in me having to pull out my old music sight-reading skills to complete it. 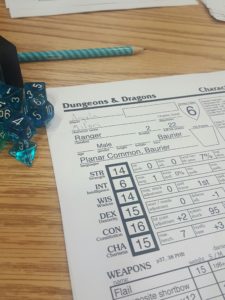 After a short break for lunch came the game that Jesus and Dan literally sat around to watch so they could bear witness as I played 2nd Edition Planescape. Fandible listeners are aware of my…apathy for Planescape. But this was the only game run by Darcy Ross that didn’t conflict with something I was running, so I grabbed the last seat. 2nd edition D&D has some bullshit rules (you want to roll low…until you don’t!) but Darcy was a great GM. We were sent to Caina, essentially the eighth circle of hell, to retrieve a mythical flower for an NPC played by Jesus. For a one shot I could ignore a lot of what makes Planescape too cronutty for my taste, but there’s no way I could play that long term.

On the other hand, the whole adventure gave us Dan and Jesus as feuding lovers, so it was worth it. And recorded for posterity below.

And with the conclusion of Planescape, it was time to bid AcadeCon adieu.

We all met wonderful people at AcadeCon. It was awesome to be at a con organized by podcasters, with podcast listeners as attendees, because for once we could say “I’m with Fandible” and people would light up with recognition. Kevin Bates, of The Mouse Guardians, played in my Bubblegumshoe game, and then was the GM for 10 Candles. The second time he saw me he asked “Are you Angela from Fandible? I thought I recognized your voice!” That was a surreal, but very cool, moment.

I was very happy that most tables I played at this weekend made use of the X card mechanic. I never saw it used in any games I played (especially because in both the horror game I ran and played in, we were up front about “things that are not to happen.” Eye trauma was pre-emptively X-carded everywhere I sat), but I was happy to see the mechanic available. There were also discussions of which pronouns to use as players and as our characters, and more than one person was wearing a safety pin. As a whole, AcadeCon attendees were caring and generous people and players.

The overall consensus from Fandible is we had a wonderful time, and will be enthusiastically supporting AcadeCon 2017! If you were at AcadeCon, leave a link to your own con report in the comments, and weâ€™ll add them to this article.