D&D at the Movies: Krull

Welcome to the newest Fandiblog feature,Â D&D at the Movies, where David and Daniel will choose a movie to review, and choose a side to support: pro or con. Today’s entry: Krull 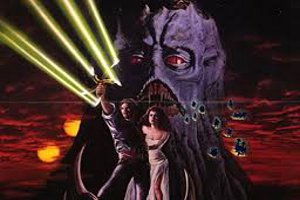 KrullÂ is a movie about a brave young man and his faithful pet: a magical throwing star that delivered death to every enemy he faced. With those words, it should be immediately clear that Krull is clearly one of the greatest films ever made, and, in fact, you should be rushing out there to find your copy and watch it right now. And if you don’t have a copy? Shame. Shaaaaaame.

But let’s assume that, for some unknown reason, knowing that the film features a magical throwing star that can be controlled by your mind and, moreover, will come back to you like an eager, deadly doom-puppy, isn’t enough for you. Let’s say you need to be properly convinced that you need to drop whatever you’re doing, right now, and go watch it. Alright, fine. Let’s do this thing. But don’t say you weren’t warned: what follows contains so much awesome that your very soul may be scarred from the experience.

First, let’s start with the basic plot: there’s a prophecy, about this babe that will become queen, and she’ll choose a dude to be her king, and their son will rule not just the world, but the whole goddamn galaxy. Yeah, that’s right, I said galaxy. You know why? Because this movie isn’t just fantasy, oh no. It’s fantasy sci-fi. That’s right, there’s mother-frackin’ laser beams in this movie. Laser beams and horses- no, excuse me, Fire Mares. These are like super-horses. You know why the heroes need super-horses? Because they have to catch up to the castle of The Beast. Wait, I know what you’re thinking: “Catch up to a castle? How the hell does that work? Don’t castles just sit there?” Oh, I’ll tell you how it works: it’s not just a castle. It’s a frackin’ spaceship. Boom. Mind: blown. It’s a spaceship that teleports every day at dawn to a new place. Good luck, heroes. You’ll need it. 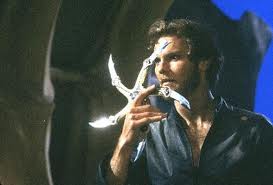 Or maybe not. Because the heroes have the mother-frackin’ Glaive. That’s the semi-sentient flying star thingy, and it makes your standard fantasy sword or sci-fi blaster whimper and cry and run back to momma wishing they were one-tenth as cool as this thing is. This death-dealing device is not only the best weapon in the entire history of weapons, but is also responsible for the most emotionally crushing scene in the movie – and this is a movie that is not afraid to rip your heart to shreds.

You see, the hero of the movie, one Colwyn by name, is joined by a whole cast of assistants: Ynyr the Old One, Ergo the Magnificent, Rell the cyclops, and Toruil the fugitive. And the movie does not go easy on these guys. Whether it’s dying from the magical sands of time after an emotionally charged scene with a spidery ex-lover, or crushed under the weight of a stone door, these companions sacrifice everything so that Colwyn can rescue the fair Lyssa (side note: hot redhead) from The Beast. There’s shapeshifting, and spiked traps, and all manner of crazy badassness. And then there’s the fight with The Beast. 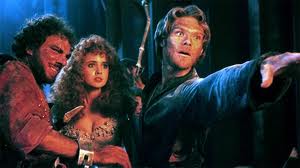 Okay, listen, I’m going to spoil something here for you, so at this point you may as well just go and see the movie, then come back here and shed a manly (or womanly) tear with me, because this is the part where the Glaive earns its Oscar (or at least would have, if this world had any justice in it). You see, The Beast is like this giant monster face thing, and Colwyn can only fight it by slashing at it like a madman with the Glaive, which spins and whirls and flies and generally gets all up in The Beast’s business, until, finally, The Beast lies nearly defeated. But the victory comes at a high price: the Glaive is stuck in the monster’s flesh, and it can’t be pulled free. Oh, Colwyn tries to summon it back, but it’s stuck fast, and the look on Colwyn’s face as he keeps calling to his faithful weapon, the Glaive’s brave attempts to get loose from The Beast, tugging and tearing but ultimately unable to escape, the sheer heartbreak of it allâ€¦ If you never thought an inanimate object could wow you with the depth of its acting ability, then you’ve never met the Glaive.

In the end, of course, Colwyn and Lyssa defeat The Beast once and for all through the power of love (and the ability to shoot fire when they hold hands, because that’s what couples do, right?). But, though love does conquer all, this movie is really all about the love, the loyalty, and the trials of one brave manâ€¦ and the loyal weapon that fought by his side to the bitter end. Go watch it, right now. 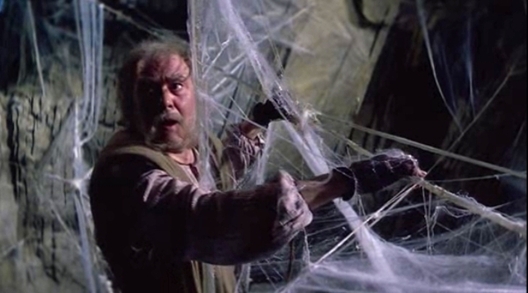 A cursory search on Google will reveal that there 45 miles of nerves contained within the human body, with millions upon millions of endings that send impulses to the brain at the amazing speed of 248 miles-per-hour. These impulses tell us when things are hot, cold, soft or coarse. They also tell us when we are in pain.

Watching Krull is like applying a hot branding iron to every inch of nerve in your body. It is as delicate with your well-being as Helen Keller playing â€œOperation.â€ While a usual bad film may only take some of your time and perhaps the cost of a rental, Krull takes much, much more.

The fact that I am writing this review shows that it is not done taking things from me.

Conceived in and birthed from the foul mind of writer Stanford Sherman like the demon spawn of an unholy union, Krull was unleashed in 1983 unto an unwitting and innocent world with the sole purpose of harming all that laid eyes on it and, exactly thirty years later, ruining my afternoon. With direction by the thrice-damned Peter Yates, Krull cast a dark shadow over the medium of motion picture as a whole and placed a terrible burden on the souls of all who watched it. 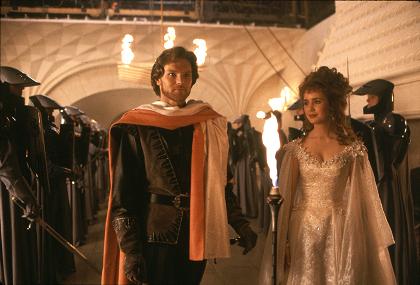 Starring Ken Marshall as Prince Colwyn and Lysette Anthony as Princess Lyssa, the film opens with the marriage ceremony of their two characters in order to unite their kingdoms into one giant Shangri-La of terrible acting. There is also a narrator that describes some sort of prophecy that the child of the couple will rule the galaxy, which seems ambitious considering that weâ€™ll learn that the planet Krull is a complete shithole.

Okay, let me get through the following as quickly as possible: Thereâ€™s a creature known as â€œThe Beastâ€ who has an army of laser-spear wielding â€œSlayersâ€ that goes around the galaxy kicking everyoneâ€™s lilly-white ass. Apparently his castle is also his ride, which means that our main villain is basically riding around in an intergalactic RV. With it being established that this union is the only thing that can stop The Beast Iâ€™ve already placed myself fully in Team Beast, hoping that the annihilation of the wedding party will wrap this movie up.

So apparently the bridal registry calls for mass laser-killings, because thatâ€™s exactly what they get. Slayers show up looking like daft-punk cosplayers and commence the best wedding-crash ever. If the ensuing carnage is any indicator of the kind of fight the unified kingdoms would put up against The Beast, then maybe they should consider the diplomatic approach, because every armed guard there gets beat like a boffer LARPer trying to fight a SWAT team. When Princess Lyssa is kidnapped and Prince Colwyn sets off to rescue her, you may think you have an idea of whatâ€™s to come. You donâ€™t. Itâ€™s much, much worse. 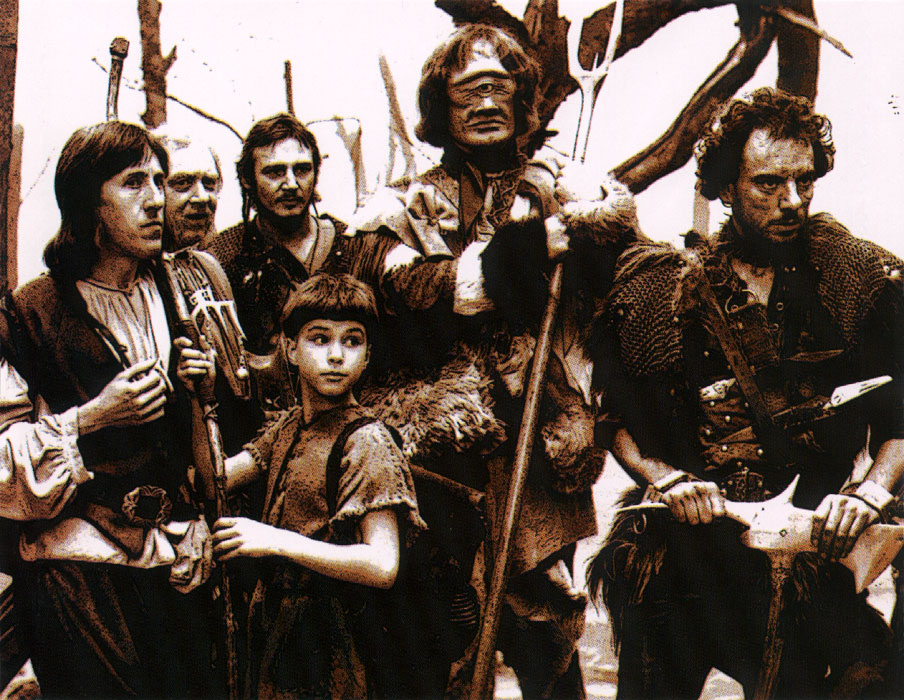 What proceeds is one of the most heinous mishmashes of fantasy tropes ever to be put on film. An accident-prone wizard. A wise old man. Horses that can run across the sky. Bandits turned good guys. A kid! A sad cyclops. A female assassin working for The Beast that, upon talking with Prince Colwyn for five minutes, decides she loves him and chooses to die instead of killing him. It is at this point in the film I began wishing for the sweet release of death and cursing Fandibleâ€™s â€œno cyanide pillsâ€ policy.

Iâ€™m not going to tell you how the film ends, both for your sake and mine. Just know that it involves the power of love and the most obvious act of a writer throwing in the towel ever recorded in human history. If you pause at just the right time during the climactic battle you can literally see the will to live leaving Ken Marshallâ€™s body.

Krull should be listed as a war crime and its creators tried in a tribunal. It is without a doubt a tragedy of immense proportions and should be viewed as one of the most terrible things ever to be made by mortal hands. If you could weaponize this kind of ghastly horror you could blow up the moon.

In closing, I would like to remind our fans to be wary of anyone who would wish to re-create this monstrosity in a role-playing game, story, or illustration, and that all who claim to enjoy this cinematic travesty must be stopped from spreading its evil.

D&D at the movies movies

2 comments on “D&D at the Movies: Krull”