Itâ€™s February again, and that means one thing for the Fandible crew: Cupid season is open and we can shoot the little winged bastards down.

Arriving in scenic Morristown on a chilly February day, we stopped by the statue of the dude showing off his dope-ass dog, reciting the traditional incantations: â€œWhoâ€™s a good boy?â€

The real good boy, of course, is the friends weâ€™ve made along the way.

On arrival to the Morristown Hyatt, like every time, it felt a bit like coming home. One of the nice things about Double Exposureâ€™s cons is their long relationship with the hotel, and how welcoming and warm everyone there is as the horde of tabletop-hungry weirdos descends upon their sleepy little burg for 4 days of games, socializing, and surprisingly acceptable $10 hotel pizza.

Registration happens, as registrations are known to do, and we wave hello to friends, old and new, as the festivities kick off on Thursday evening. Finding an empty slot at a game of Kids on Bikes, the gaming begins, and, dear reader, as I donned the mantle of Drew, 12 year old genius whoâ€™s already in Senior year and runs the Dragonâ€™s Nest BBS, I had no idea that it wouldnâ€™t be the last time Iâ€™d step into those ratty sneakers of his.

This first game set the tone for the con, as our group was a delight, perfectly blending teenage antics, humor (â€œI throw a pickle into the hallway.â€ â€œ… it lands. There is now a pickle in the hallway.â€), and horror (blood rituals out behind the 7-11 and all). On this high note, Day One was complete and everyone headed off to bed. Or the bar. Or the bed-bar (are you listening, Hyatt? Itâ€™s like a giant bed but thereâ€™s a bartender. You can have this idea for free.)

Friday was more of a mixed bag- we started strong with a session of Psychic Detectives. Let me tell you, there are far worse ways to start the day than by getting together with fellow gamers and making a murder board. Clever mechanics allow each â€˜psychicâ€™ character to advance the plot by revealing facts about the past, present, or future of the case, while the police players resigned themselves to following the trail of psychic crumbs to wherever it would lead. This, by the way, happened to be the roof of the local doughnut factory, where a tense stand off with the mayor ended in victory for our rag-tag team of heroes and charlatans. 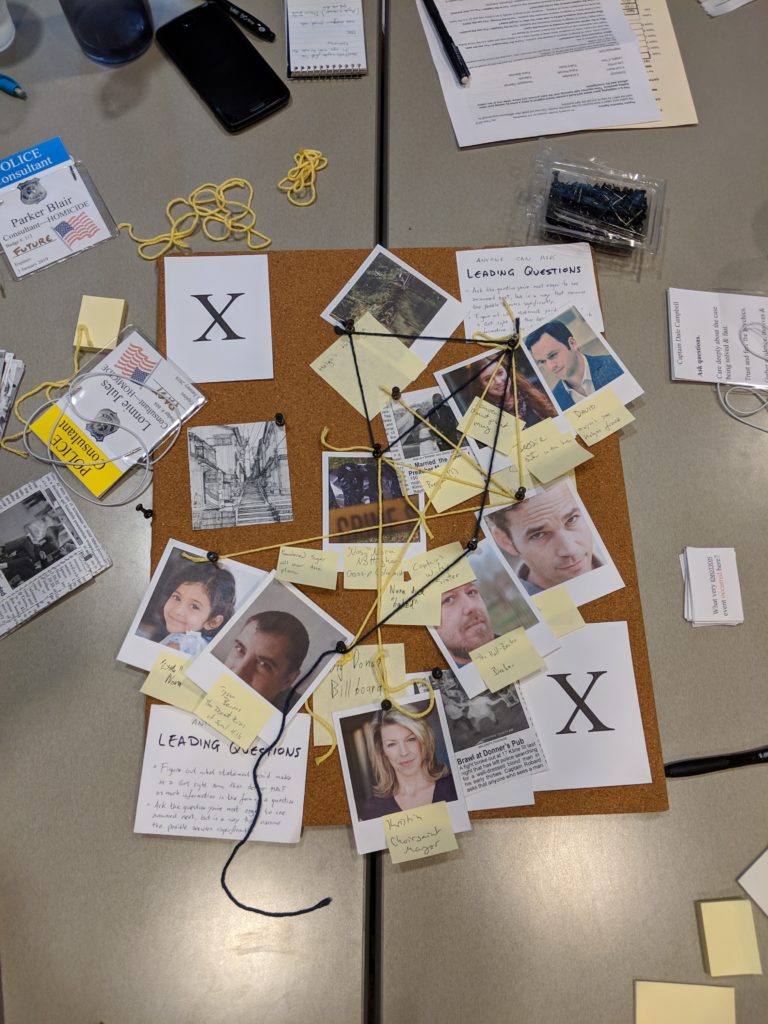 My afternoon game of Afterverse was unfortunately cancelled due to not enough people showing up, but the GM was a great sport and those of us who did show up got to play an early version of the space combat game based on the same universe that he is working on. Thisâ€™ll be one to keep an eye on- the sheer amount of boxes, stats, counters, and sheets is intimidating at first glance, with both the ship and each member of the crew having their own separate sheets, abilities, and stats to track, but in practice, after a round or two to get used to the rhythm of the game, it just begins to flow. A 2-ship dogfight went back and forth as we each sought to disable the otherâ€™s systems and get in the final shot- but a desperate last minute attempt to go into RAMMING SPEED ended in my victory, even if just barely.

My last game of the day, Sig: Manual of the Planes, was also unfortunately cancelled- a shame, because anyone who knows me knows that giant multi-planar cities are my jam. Not a complete loss, though- I took the opportunity to get some rest before what promised to be an intense day on Saturday, and I got the chance to talk to the gameâ€™s creator later during the con and purchase a copy of the game (and hand him a copy of 3 Goblins, natch).

To sleep, then, perchance to dream, and Saturday crashes down on us with a wave of all the people who couldnâ€™t make it to the first two days, and some truly spectacular gaming. The star of Saturday for myself was our good friend Kevin Petker, known across the world as the creator of Fandible favorites Princess World and The Ward. In addition to his game design credentials, Kevin is also just a great guy, funny, warm, and, yes, a hugger.

All of this would come back to haunt me by the end of the night. 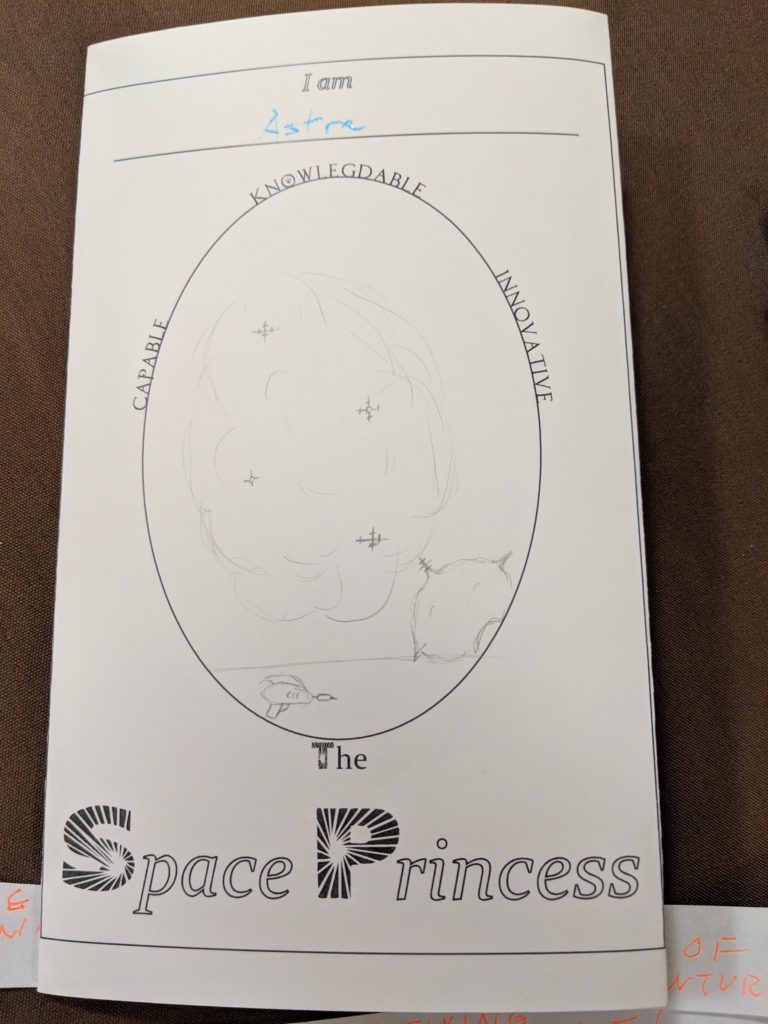 Saturday was quickly dubbed â€˜Dan gets in touch with his feminine sideâ€™ day, as we began with a cheerful game of Princess World run by Kevin. Princess World remains quite possibly my favorite PbtA game of all time, a wild mix of adorable cuteness, surreal adventure, and surprising depth. We were even joined at the table by what I can only assume was an actual fairy princess! As the Space Princess, I did what I could to keep the crew together as we took Pirate Princessâ€™ hat-ship up into space to visit the Moon Princess, who was upset because the Moon had lost its reflection, which seemed to be driving animals across the galaxy mad. Waylaid by space pirates riding a space-topus, the Princesses enacted a plan- ok more like four separate plans, the Pirate Princess decking her crew out in their party finest while the Skateboard Princess did some rad skating down the space-topusâ€™ tentacles (with some guidance from the Space Princess watching on the monitors). An attempt to communicate with the space-topus ended in misunderstanding and the massive creature taking the Fairy Princess prisoner and trying to rub her fairy dust all over itself. While the Proper Metal Princess rocked out, we were able to bring all the princesses to safetyâ€¦ for now. 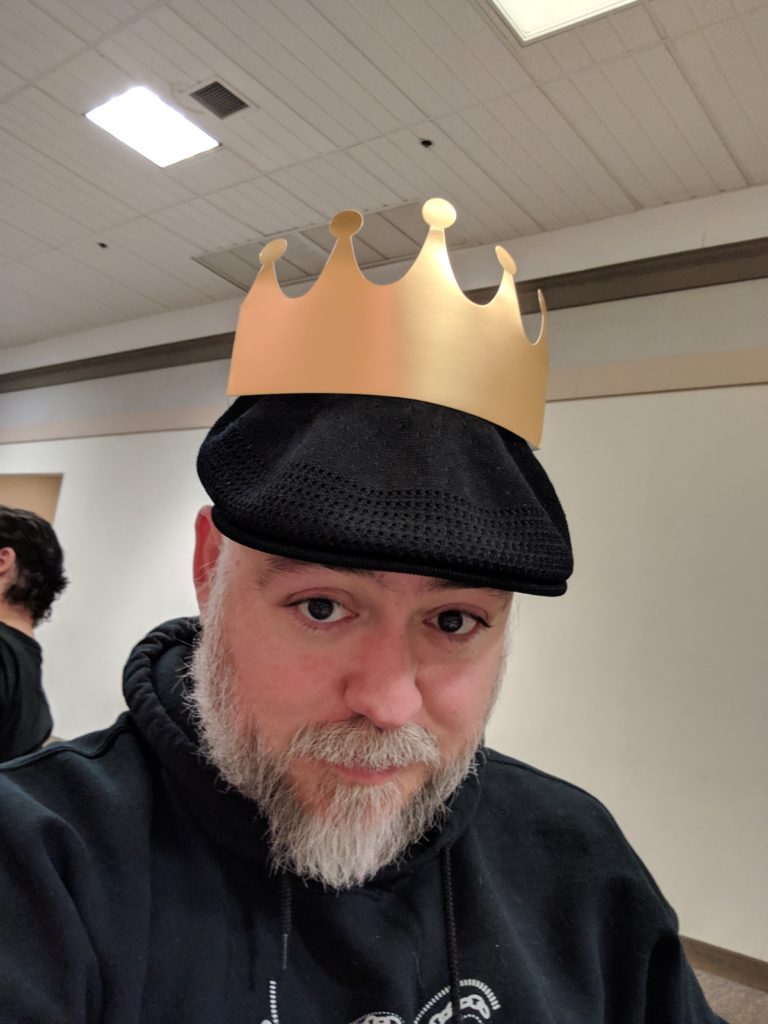 Why, yes, I *am* the prettiest princess.Â

From wild space adventures, we delved down into the dungeons for the second game of the day: a D&D 5th Ed. Adventure dubbed The Rat Princess (no relation). In a low-magic world where rat-catchers are traditionally always women, a band of young women are sent on a dangerous mission to find and stop a were-rat cult that was threatening to unleash hordes of rats and disease upon the city. The GM had created a very clever relationship mechanic that tied each of the characters to one another in varied ways (sisters, competitors, friends, ex-friends, lovers, etc.) and used Rat Tokens to allow players to re-try failed rolls or recover hit points by recounting times in which they â€˜ratted outâ€™ one of the other party members in the past. My character was a cynical but talented young rat-catcher who was out to make a name for herself despite being disliked by just about everyone else, and after the group tried to talk the cultists down (â€œWeâ€™re not here to fight you! We just want to stop the ritual that will unleash plague upon the city!â€ â€œ… aww jeez thatâ€™s really awkward because, you see, weâ€™re the cultists that are going to complete that ritual, you see, and anyway weâ€™re real sorry about this but weâ€™re gonna have to kill you all nowâ€), the Rat Tokens came into play again and we discovered the Rat Princess was one of our own all along! As the Rat Princess ascended to her filthy, rat-covered throne, the game ended with my character crouching, silver knife in hand, ready to engage the massive mess of red-eyed rodents in the darkened temple. 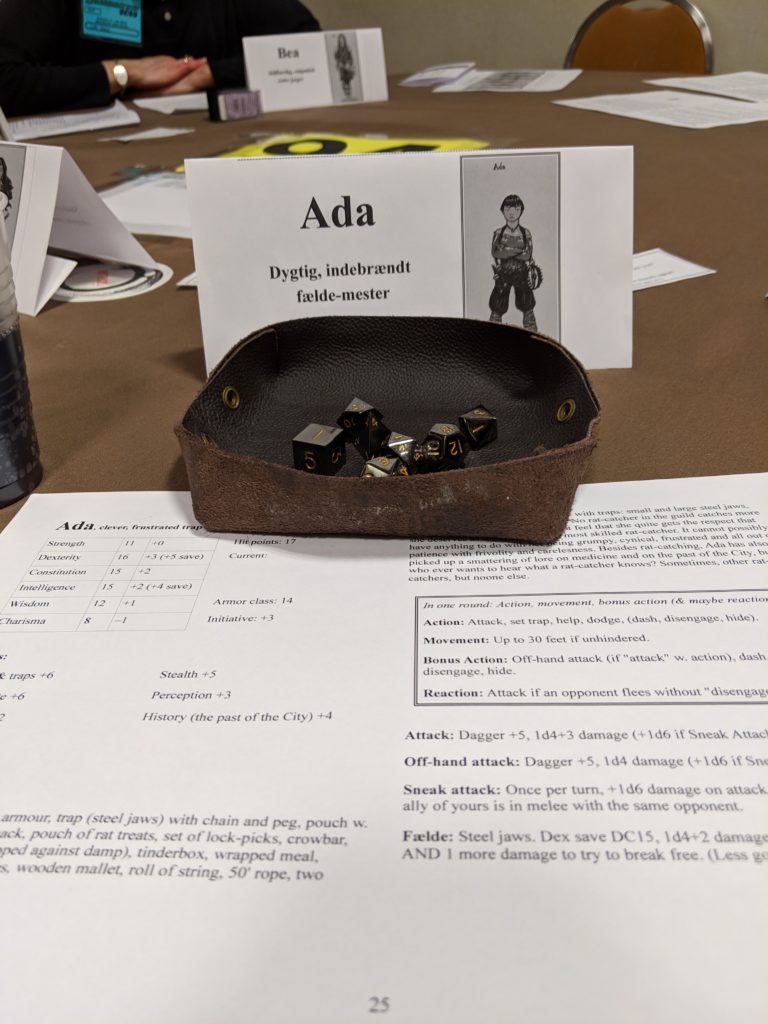 So, from magical princess silliness to grim explorations of female relationships in rat-infested dungeons, how could one possibly cap off such a day? Iâ€™ll tell you how: Bluebeardâ€™s Bride. It was my last game of the day and the first time Iâ€™d played it, and, frankly, I was a little nervous. Iâ€™d heard it was an intense game, dealing with deep, dark themes and horror. But as I arrived and saw Kevin again, dark veil covering his face, I knew things would be alright. Horrifying, but alright. 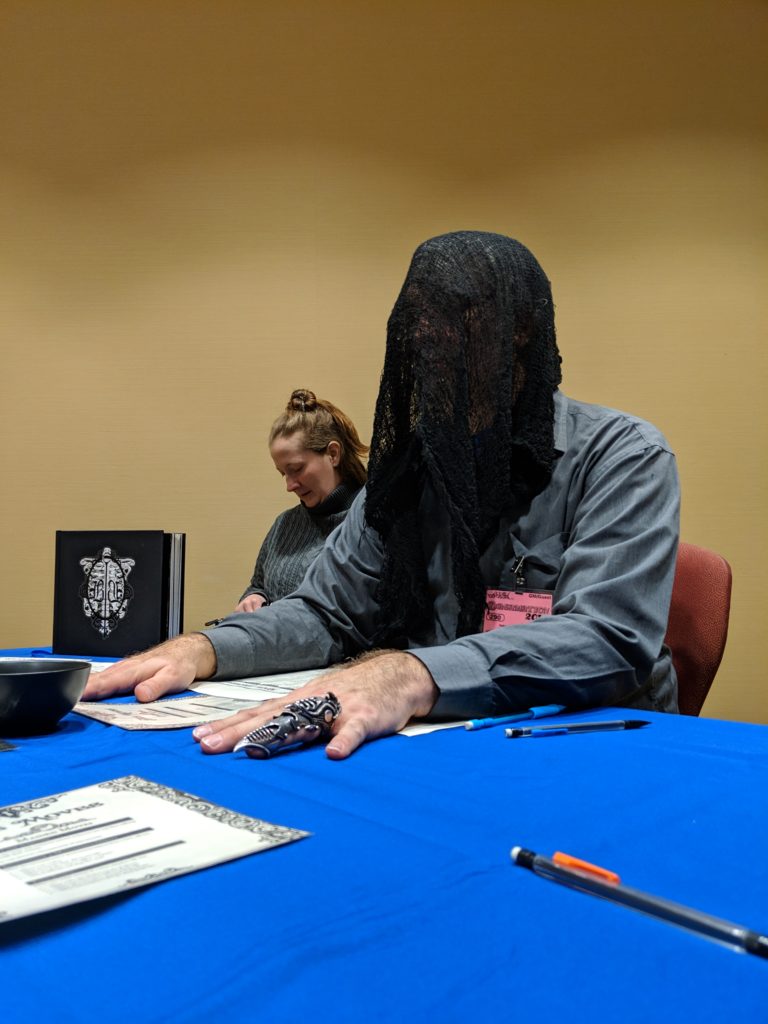 Now, let me take a moment to once again express my admiration for Mr. Petker- Princess World and Bluebeardâ€™s Bride, despite both being PbtA games, could not be more different, but he handled it with exquisite poise and talent. His role as the groundskeeper in Bluebeardâ€™s Bride was equal parts dark storyteller and wicked jailer, and as the various aspects of the Bride wandered Bluebeardâ€™s mansion alone together, the group soon came to both dread and anticipate every time heâ€™d smile, sharp as a knife, and hiss out â€œ… oh, itâ€™s much worse than thatâ€¦â€. Did the Bride remain faithful in the end? She did. Did it cost her anything? Oh, yes, yes it did.

And so Saturday ended, and the end of Dreamation was in sight. To sleep once more, and for once grateful that no dreams came, I woke and headed to my last game on Sunday morningâ€¦ and ran right into an old friend. Kids on Bikes once more, and I discovered that it was a legacy game: the same characters from the first game I played on Thursday evening were there, even if they were played by different people, and learning about what our kids had been up to since the last time I saw them felt like tuning in to a favorite TV show after having missed a few episodes. 12-year old Drew once again found himself with the rest of the Adventure Club, this time loading up water guns to try and save the town from an invasion of plastic aliens! The game ended in victory for our kids, and with that to cap off the Con, I headed back home, where my cat awaited not so patiently.

In the end, Dreamation was a blast as usual. Glitches and missed games aside, Double Exposure runs a tight ship, and the diverse, friendly, welcoming crowd of gamers that flock to their cons do so with good reason. Hereâ€™s hoping we see you at the next one!