Fandible Interview: Anna Kreider, Thou Art But a Warrior 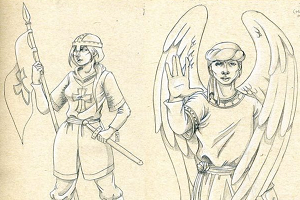 Welcome to our second Fandible interview! Today I’m here with an interview with Anna Kreider about her current IndieGoGo campaign to fund a second edition of her game Thou Art But a Warrior. You might also know Anna from the internet sensation Go Make Me a SandwichÂ and as a fellow contributor to Gaming as Women.

Fandible:Â What is Thou Art But a Warrior about? Who can you play and what sort of adventures do you have?

Anna:Â Thou Art But A Warrior is a game about tragedies. You play a member of the orders of Muslim Knights who were sworn to defend Islamic-ruled Spain from the hordes of Christian crusaders led by Charlemagne. Ultimately, all your best efforts will end in vain, but how you deal with that failure is up to you. As for what sorts of adventures characters have, that depends on the group. Some groups like to focus in on the war with the Christians. Some like to focus on the internal political struggles of the Islamic kingdoms in decline. And some like to have a mixture of the two.
Fandible:Â What drew you to this time period and place, and what made it appealing to turn into a game setting? What about Polaris made you think the game would be a good fit for this setting?
Anna:Â Thou Art But A Warrior was originally written as part of a setting design contest held on the Forge. The aim of the contest was to write a setting for a published game that changed the game without changing the essential core mechanics of the system. While flipping through games on my shelf, I quickly settled on Polaris, as the mechanics are really beautiful and it is one of my favorite systems, but I knew some people didn’t care for it because of the sometimes gonzo mythic qualities of the setting. So I thought a good way to change that would be to look for an analog from history.The Polaris setting and mechanics dictates that protagonists are Knights defending a doomed Kingdom. The core of that idea – knights defending a doomed ideal – got me reading about the Crusades. And I didn’t have to do much reading before I knew that the era of the Reconquista was what I wanted to use for my setting. Here was an actual period in history where orders of knights, who were scholars, warrior-poets, and nobles, fought to defend a beautiful kingdom that was ground under the boot heel of history. It doesn’t get more tragic than that! And it’s absolutely a perfect fit for Polaris.
Fandible:Â How did you go about research for this game?
Anna:Â I’ll admit that I didn’t take a particularly rigorous academic approach. I mostly did research on Wikipedia and through a few documentaries. For me it was more importance to capture the essence of the history while leaving it sufficiently general for people to invent their own details. The context of the game, the fact that most North American gamers are white and this is a game about Muslims fighting Christians, made it threatening enough. I didn’t want to add to that the weight of the expectation of historical accuracy – especially as most gamers tend to be the sorts of people to whom accuracy matters.I did make efforts to ensure that details regarding the culture were correct. But as far as historical events, I’ll admit that I took quite a bit of license. The conquest of the Iberian peninsula by the Christian crusaders was an event that spanned four hundred years, but the game rules compress those events into a single generation. I prefer to look at the game as an alternate history with the same ultimate outcome.
Fandible:Â Do you think there are challenges and rewards specific to games in historical settings versus entirely fictional settings? What might those be?
Anna:Â The challenge with working with a historical setting is that you have to be very accountable for the decisions you make in how to portray that history. Unlike with Polaris, this draws on a culture and history that is very deeply important to a large group of people. Further, there are a lot of issues of race and religion at work here. As a white Christian writing about non-white Muslims, the fact that I was writing a game in which the Muslims are destined to lose could be seen as a pretty awful thing. I worked really, really hard to make it clear that the Muslims are the heroes, and that the fact that their culture will be destroyed is a tragedy of the highest order. It was a difficult balancing act.The other big challenge is one of audience. Because of political relations between the US and the Middle East, this game is a bit of a tough sell to North American audiences. That’s somewhat offset by the fact that I’ve received a lot of enthusiasm from European gamers, who are excited to see a game that deals with their history, but being that I’m situated in Canada, I’ve had some difficult conversations about my game. 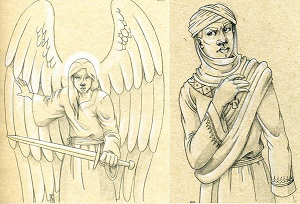 Fandible:Â Do you find that players seem to play differently in you game with the inevitably of defeat then in traditional games where victory is usually guaranteed or at least more certain?
Anna:Â The big difference is that there is definitely a buy-in when people are preparing to play Thou Art But A Warrior. In normal games, you don’t have a particular expectation of a fixed ending. The ending might be tragic, or it might be happy, or it might be mixed. In Thou Art But A Warrior, the ending is always a tragedy. Some gamers really don’t like the idea of a game that forces that kind of a story, and that’s cool. I find it best to be up front about that, so that if it’s not your cup of tea you can play something you will enjoy.And when people accept the buy-in, that their character will have a tragic end, there’s something liberating about that. You can sit back and enjoy the struggles of your character as everything goes to shit around them and be totally okay with that because it makes for great story. It takes a different mindset to accept that your character getting screwed over is actually good for the story as a whole, but once you get used to it the results can be very satisfying.
Fandible:Â Did you learn any lessons from the first edition that you’ve used to improve upon the second edition?

Anna:Â Thou Art But A Warriorwas very much my first foray into game design. Even a few years after I’d published it, I insisted that I still wasn’t a game designer.I’ve learned a lot since then about working in gaming and game design. From playing my game a lot I also learned some key lessons. And I’ve definitely grown as an artist. A lot of the changes to the rules texts are small, but important to helping convey how to achieve satisfying play. It also helps that the art matches my vision for the game much better than it did in the previous edition.I would also be remiss in mentioning that the single biggest improvement to the new edition is getting Ben Lehman’s permission to package the Polaris system as part of the new book. Getting to package the game as a single volume rather than two books that have to be references separately is a huge improvement.

Fandible:Â What made you want to make the jump from game player to game (or setting) designer?
Anna:Â At first, it was just the challenge of the contest that intrigued me. After Thou Art But A Warriorwon the contest, I received a lot of support and encouragement to publish, most notably from Ben! I was excited by the idea, so I went for it.It’s funny, but when I first sat down to write Thou Art But A Warrior, I thought of that as a writing exercise, not as game design. Even when I was going through the process of creating the added rules after the setting contest itself, I resisted the label of game designer. I guess I thought that I didn’t get to call myself a game designer until I could design a bulletproof system like Ben Lehman or Vincent Baker, or until I had written a jillion successful games like Jason Morningstar. It wasn’t until later that I realized that defining who I was in reference to other game designers was pretty stupid.
Fandible:Â After Thou Art But A Warrior: Second Edition goes to press, do you have any other projects in the works?
Anna:Â I’m currently in the process of working on a book that will draw on and expand on the writing I did for Go Make Me a Sandwich. It’s a pretty huge project, so I honestly can’t say when it will be finished, but I’m very excited by the prospect. I’ll also be doing a bit of illustration, including for the Prismatic Art project. And I have a few other game design projects I’d like to get back to, including Under the Sun – my Game Chef entry from 2010 that was selected as a finalist – and Black Sky, my own personal white whale, a game about space opera that I hope to finish… some day.
Fandible:Â Anything else you’d like to say?
Anna:Â I’d just like to say thanks to Ben Lehman, without whom this wouldn’t be possible, and who taught me the value of artistic boundaries. Thanks, Ben.
And thanks to Anna for the interview! Be sure to check out Thou Art But a WarriorÂ on IndieGoGo – the base goal has already been met, so the game is definitely a go! There’s currently less than $300 to go before the final stretch goal is hit, with some great bonuses for backers who go for a print copy of the book.