Fandible Picks of the Month – January 2016 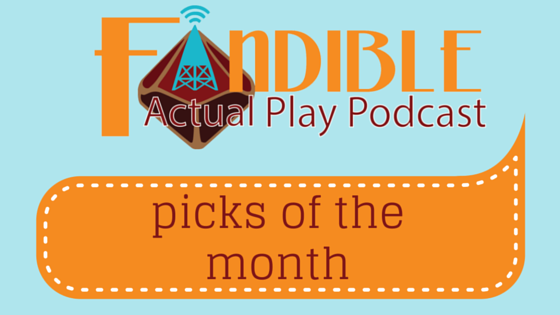 Happy 2016, and welcome to Fandible Picks of the Month! Every month, members of the Fandible crew will tell you about the newest and coolest things weâ€™ve discovered, sharing the wealth with you. Keep reading for new books, websites, and TV shows to watch out for.

Fandible Picks of the MonthÂ January 2016

My love of young adult stories, especially dystopian ones, is well documented at this point. The system is corrupt, and kids are responsible for overthrowing it.Â The 100 takes the basic premise of dozens of similar YA books and finally translates it to TV – and itÂ works. While it’s easy to write this off as another CW show about Pretty People Doing Impossible Things at first glance (looking at you, Tomorrow People),Â The 100 is fuckingÂ dark. Almost 100 years ago, humanity screwed up the Earth big time, and the survivors of the nuclear holocaust decided to live in space for awhile. Now that the space station is falling apart, the adults are desperate for solutions. One particularly dark one: send 100 accused juvenile delinquents, who are probably going to be executed when they turn 18 anyway, down to Earth to see if it’s habitable. The 100 hormonal, potentially criminals, and emotionally unstable teenagers discover that not only is the planet habitable, but there are human settlements that never left. The Grounders, the first of the people they meet, are violent and tribal, and apparently mostly made up of teenagers as well, as they live fast and die young. Season Two introduces Mount Weather, another group of humans who locked themselves away in a bunker with some of the great treasures of humanity’s past (it’s funny to see Van Gogh paintings just casually laying around in Mount Weather, not unlikeÂ Last Man on Earth).Â Clarke Griffin, one of the wrongly accused juvenile delinquents sent to Earth, is the de facto leader of the “Sky People,” and she faces absolutely brutal decisions to try to keep her people alive as she makes precarious alliances. The show does a great job at making the bad guys do terrible, awful things…and yet somehow they’re still somewhat sympathetic. Season three starts next week, so there’s still time to do a fast binge watch on Netflix!Â – Angela

The Legend of Korra

I go through phases where I really want to see really cool animated fights. I turn on the television, looks through Netflix, Hulu, or Amazon, and try to find something that looks interesting. Most of the time, what I find are animes that are filled with random panty shots, boob jokes, and sexual innuendo throughout. And while I can chuckle like the best of them over a little fan service, it actually gets on my nerves if it happens beyond that, asÂ if I couldn’t pay attention if they didn’t flash boobs or ass or panties every couple of minutes (I’m looking at you, High School of the Dead). Anyways, I turn on Amazon Prime, go through some anime that didn’t really catch my attention, and finally decided on seeing what all this talk about The Legend of Korra has been about. Sure, I hadn’t seen Avatar: The Last Airbender, but I figured ‘what the hell’.

And let me tell you, people…. The Legend of Korra is everything I want in a fantasy story. Humor? Check. Consistent rules for magic? CHECK! Technological innovation? Nailed it! Characters that can be both silly but serious? Yes, yes, yes! Amazing fight scenes? Some of the best I’ve seen! LoK was everything I wanted in a show, and I really can’t believe I waited this long to view it. Angela and I watched the show in a matter of two weeks and we just started on The Last Airbender. I’m sure anyone who loves anime has already watched this show – but for those of you who aren’t and haven’t? This show is fantastic. It’s fun. It’s progressive. It makes me want to be a better storyteller because of it.

FYI – I could watch an entire series of Bolin and Varrick traveling the world together.Â – Billy

Like virtually everyone else whoâ€™s been down the various rabbit holes that the web offers, Iâ€™ve found myself in numerous â€œtime-sucksâ€ that have dominated an otherwise productive afternoon. Queries that string together like â€œIs Alton Brown a karate expert? What types of karate exist in the modern world? What styles of martial arts were used in feudal Japan? Literally anything about ninjas. How much did the movie â€œ3 Ninjasâ€ gross? “Grossest ninja moviesâ€ have been the death knell for any hope of self betterment in a day. If only there was a way to utilize this natural curiosity into something meaningful, instead of convincing myself that youtube videos featuring household objects exploding counts as â€œlearning science.â€

And then a friend told me about a sale on Udemy, an online education platform that has experts in various fields design lecture-based classes. For twenty bucks I decided to learn about audio editing and minor wordpress design but opted to skip a refresher course on grammar since we have an editor and honestly what does she do all day aside from fix run on sentences like this one I just googled â€œhow to antagonize your editorâ€ and I nailed it.Â [Ed. Note – David’s XP is docked for an unspecified number of future HEX games. Also? No more nails.]

Vicious by V.E. Schwab, The Young Elites by Marie Lu

I’m a sucker for a good villain, and especially for a good villain origin story. VIllains are often the heroes of their own stories, after all, and even when they themselves fully accept their villainy, it’s always for a ‘good cause, because it’s something they believe in so deeply that they’re willing to watch the world burn to get it. It’s always been fascinating to me, and so this month I’m recommending three books: Vicious by V. E. Schwab, and the first two books in the Young Elites series by Marie Lu (The Young Elites and The Rose Society).

Let’s start with Vicious: a superhero story that goes dark, while still staying true to its 4-color roots. In a world where EO’s (ExtraOrdinary people) are little more than urban myths, a pair of brilliant college student friends discover the secret to becoming EO’s themselves. The events they unleash lead to a 10-year tale of revenge and madness that’s incredible to read, as the two gather allies and circle each other for one final confrontation. Highly recommended.

As for The Young Elites, this series takes place in a fantasy world that reminds me of middle-ages Italy, and follows Adelina Amoterou as she grows up living with the consequences of a terrible disease that wiped out thousands of children, and left those who survived marked and often disfigured. Out of all of those, some developed strange, otherworldy abilities. As Adelina discovers her own dark gifts, she must navigate the treacherous waters between those who want to use her, and those who simply want to kill her, surviving by any means necessary until it’s her time to use.. and to kill. It’s a YA series, with many of the same trappings (beautiful/talented girl in a world that’s hunting her, torn between two handsome boys each with their own brand of temptation, etc.), but where most of these series chronicle the heroine rising above their challenges to become heroes or saviors, the Young Elites series follows Adelina’s slow but certain embrace of the darkness inside her as she carves a bloody path of revenge, all the way to her rightful throne.Â  – Daniel

Give us your own Picks of the Month in the comments below!