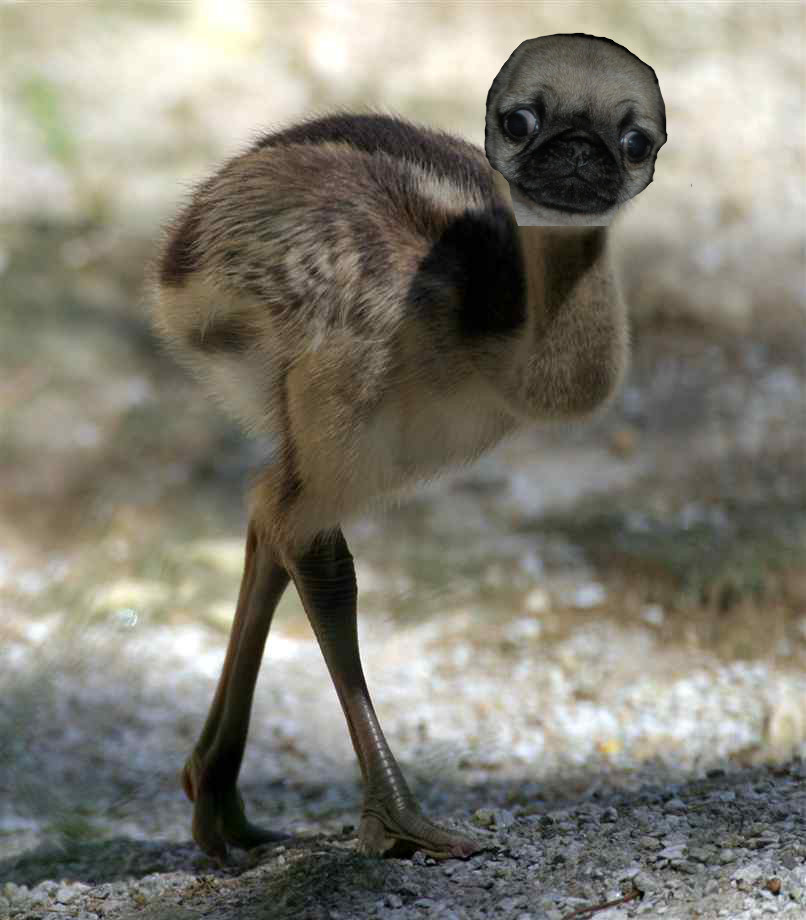 Environment: Usually found in captivity in towns across the steadfast. Rarely found in the wild.

Description: The Jin-Jin is a 2.5 meter tall bipedal animal that greatly resembles a rather rotund flightless bird. The only noticeably non bird like aspect being a small flat face with a scrunched up black nose and large eyes that look like they may pop out at any moment.

The greatest question any sentient being has when considering the Jin-Jin is how such a creature could possible exist. Utterly incapable of self defense and with an intelligence that would be comical if it wasn’t so pathetic, most wonder whether the animal was simply a sick joke from a prior age.

There are currently only two known uses for the Jin-Jin. The first is as a riding animal. Its stubborn ability to ride through any environment is considered a boon to many a traveler. However, it will need constant supervision as a Jin-Jin will easily ride into a tree or even fall off a cliff without hesitation.

The other use is as a source of sustenance. Jin-Jin meat is considered by many to be extremely delicious and nutritious. The currently held belief by most Aeon priests is that the Jin-Jin were bred by some prior age as some sort of food animal. Perhaps a previous civilization, in a bid to ease animal suffering, developed a creature so stupid that it would be considered a mercy to put it out of its misery.

The greatest mystery of the Jin-Jin, however, is not their origins but how they reproduce. As of yet, there has been no reported sighting of any breeding behavior for the Jin-Jin nor any children of their species. The appearance of a new Jin-Jin seems to happen almost spontaneously. Â It is not unknown for a farmer to open his stable and find 3 fully grown Jin-Jin where there was only one previously.

As of yet, there has been only one successful attempt at the recording of a Jin-Jin birth. An Aeon priest near the coasts of Ancuan used a hidden numenera device to record the behavior of the Jin-Jin without humans present. After 5 uneventful years, one of his assistants came to him with the news of a new Jin-Jin appearing. Excited, the priest went to his workshop to view the video. Minutes later, his neighbors say they heard screaming followed by the sound of breaking objects. When theyÂ rushed to his home to help, they were greeted to the sight of the priest opening the door and striding towards the beach, striping his clothing along the way. Screaming at the top of his lungs “Jin‘nglui mglw’Jin Jinthulhu R’lyJin wgah’Jinagl Jinagn.”

He dove into the water and began swimming towards the depths of the ocean, never to be seen again. The recording has been in the vaults of the great library of Charmonde ever since, and attempts to view it would be considered ill advised.

Loot:Â One Oddity and 3 meals worth of Jin-Jin Meat. Each helping heals 1d3 worth of damage.