Out of the Box: A Fandible Notebook Exclusive 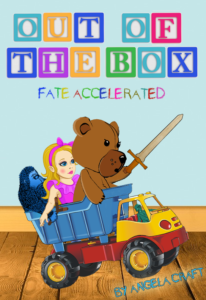 This monthâ€™s Fandible Patreon notebook entry is a special one for me – itâ€™s been six years in the making. It also marks 12 consecutive months of Notebook content from the entire Fandible crew. I am so proud to finally be able to release Out of the Box into the world for Patreon supporters at the $5 level and higher.

Out of the Box started back in 2013, when I was fully immersed in the game design conversations happening on Google Plus. It seemed like everyone was creating a game then, and I wanted in on the fun. So I began toying (…pun intended) around with a little game about toys and their adventures when humans werenâ€™t paying attention. The inspiration is absolutely heavily drawn from the Toy Story franchise, but Iâ€™ve been obsessed with the secret lives of toys since I was first introduced to The Velveteen Rabbit, and Iâ€™ve muddled about with variations on the theme ever since.

In November 2013, I took â€œThe Toy Boxâ€ to Metatopia, and halfway through the weekend landed on the title â€œOut of the Boxâ€ as a much more descriptive, active title. The original logline was A game of epic adventure on a small scale. Play as beloved childhood toys working to protect your child from the things that go bump in the night, on a quest to be so loved that you become real. I had three rounds of playtests, and unfortunately basically donâ€™t remember anyoneâ€™s name from back then (in my defense, it was six years ago!). But there were great conversations happening about the themes of childhood and nostalgia that the game evoked. I was on the right track!

And yet the game sat on my digital shelves for six years. I just couldnâ€™t quite get the system to sing. I wanted something light, something that allowed for a wide variety of character types. I wanted Fate…but even that seemed like a lot for a light little game about toys.

Eventually, Fate Accelerated came out though, and it all clicked. Then I just needed a reason to dust the game off and put on the finishing touches. Iâ€™ve been kicking this around for a year, since we first launched the Fandible notebooks, and here it finally is.

Out of the Box is still â€œa game of epic adventure on a small scale.â€ You play as Real Toys, to borrow a concept from The Velveteen Rabbit, who, like the cast from Toy Story, can interact with the world when the humans arenâ€™t paying attention. Additional inspiration comes from media ranging from The Brave Little Toaster and Winnie-the-Pooh, to Bunnicula and Fraggle Rock, as part of the fun comes from playing toys who know they are toys…but still have a childâ€™s understanding of the world. Itâ€™s built on the Fate Accelerated system (youâ€™ll need a copy of that to play), and includes new mechanics to build your toy box (to help flesh out the world you live in), plus a new stress track, called Exposure, to track when the adults get suspicious of finding these Toys all over the house.

As mentioned, this marks the twelfth GMâ€™s Notebook for the Fandible Patreon, and the fourth original game released. If you back us at the $5 level or higher, you not only get access to Out of the Box, but Three Goblins in a Trenchcoat (and the supplement Three if by Trenchcoat),We Are the Cartoon Heroes, and Cats & Corpses. Plus thereâ€™s Shadowrun and Star Wars supplements, system-agnostic adventures for superhero games, an End of the World scenario, and even a Purge-themed random table, and more!

Look out for news next month on how the first six months of Fandible Notebook content can be accessed without a Patreon subscription!

I hope youâ€™ll enjoy reading, and playing, Out of the Box. Please let us know if you have a chance to bring it to your table!

1 comment on “Out of the Box: A Fandible Notebook Exclusive”