The Quest, or Why Shondo is my Patronus 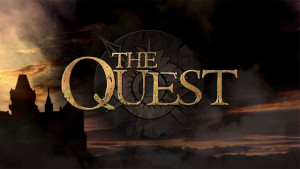 Picture, if you will, a lazy Saturday evening. Your ever-loving Fandible crew has just wrapped up recording yet another episode of the Best Damn Live-Play Podcast On Earth, and yours truly says:

“Guys, I have a show you all need to watch! It’s a reality TV showÂ -“

And after I’m done dodging dice and pencils thrown at my head, I continue,

“- with an actual plot and it’s about a group of people chosen to be Paladins and defend the Kingdom of Everealm against the evil Verlox!”

Now, despite some initial resistance to the idea of both reality TV and fantasy, I managed to convince them to at least give the first episode of The Quest a try (the whole first season is on Netflix!), and the rest, as they say, is history – much like the thousand year history of Everealm’s battle against Verlox the Darkness.

Now, I’m sure many of you have seen reality TV shows before, so you know the formula: a group of normal people is brought into a situation and made to compete for some kind of prize. Alliances and factions are formed, people talk shit behind one another’s backs, someone probably has sex in the jacuzzi, and we all feel slightly soiled after watching. But when you introduce dark tunnels, mysterious woods, Queens and Viziers, ogres and banshees, hags and curses, magic and steel to this formula, something special happens. Twelve people travel through a mysterious underground waterway to meet the Fates; twelve Paladins dedicated to the protection of Everealm and the battle against Verlox emerge out the other side of the tunnel.

Part of what makes the show such a pleasant surprise is that, unlike so many reality TV shows, there’s an actual, overt plotline: Everealm is in danger. Verlox approaches, and every day that threat grows. There is danger outside the walls of the castle, and danger within, even as the various actors that play the peasants and nobles of Everealm never break character. The challenges are presented as part of the training the Paladins receive to determine who is the One True Hero that will wield the Sunspear against Verlox. And every one of our Paladins is dedicated to that quest – oh, sure, there’s a bit of the usual cliques and backstabbing, at first. But before long, we have a group of people who truly care about this realm and the people in it. Songs are sung, challenges are faced, and in the end, our One True Hero faces their destiny in a truly spectacular fashion.

Sure, the plot isn’t particularly deep. The acting can be a bit wooden, and the effects can sometimes be a bit cheesy (did I see the Sunspear altar wobble a little when they placed their pieces on it?). But in the end, it’s easy to overlook these minor faults because, let’s face it: we’ve all dreamt of something like this, haven’t we? The idea that someday we’ll be told a magical realm of fantasy needs our help, and we’ll be taken off to find our true destiny as heroes. The Quest taps into this dream in all the best ways, and I highly recommend spinning up Netflix and immersing yourself in Everealm’s magic for a while. You won’t regret it.

…. And if all this isn’t enough to convince you, then just watch if for Shondo, MMA fighter, and living avatar of awesome. Shondo believes in you, and when that light shines on you, you’ll be ready. Don’t let him down. 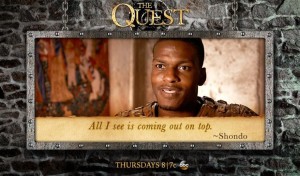 2 comments on “The Quest, or Why Shondo is my Patronus”