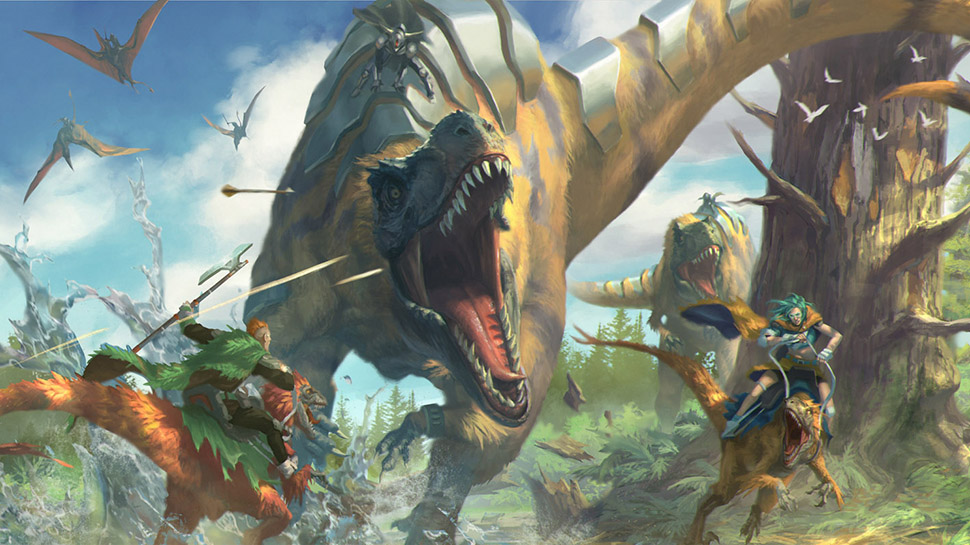 So who liked Terra Nova back in the day?

For those that don’t remember this fun little series, the idea is this – ‘wouldn’t it be crazy for people from the future to travel to the past and live with dinosaurs’. Well,Â Shanna Germain’s newest Cypher System settingÂ Predation takes it a step further. Instead of people simply living with dinosaurs, it adds a ‘wouldn’t it be cool if we also attached cybernetics to dinosaurs for the lulz?’

At some point, a group called SATI found a time portal back to the age of the dinosaurs. They sent thousands of people through to check this whole place out – and then one day, the time portal just stopped working, trapping thousands of people 65 Million years in the past. Bummer, huh? Well, in the game, you aren’t playing the original people left behind. Most likely, you are playing the third or fourth generation. At this point, it’s been about a hundred years and the portal hasn’t come back. Technology is breaking, cities are adopting a crazy prehistoric technological look to them, and people are trying not to think of the meteor that is probably going to be crashing into Earth in a hundred or so years.

Fandible played this game last week and had a hellova time! The game uses the Cypher system rules which made the game play fun, easy, and quick to pick up. I enjoyed the setting so much, Jesus even let me create a faction in the game. Here is a taste of a possible nemesis our characters might run into during our game!

Greed travels as far as theÂ Cretaceous period. Sure, SATI claimed that exploring the past was a start of something better. Something new. That the world was going to restart itself without the smog and toxic clouds that choked the major cities of Earth. Yet, when it came down to it, Greed was as prominent in the Cretaceous period as the dinosaurs.

Deep veins of untapped metals were found. Claimed. Who better to dig through the filth and muck of the uncharted land than those who society had already deemed useless?

SATI bought prisoners in. Or maybe some faction of SATI? A penal corp of miners were used to extract these rare metals. It was dangerous work – with insects the size of cars and fungus that seemed to find a way to grow in a man’s lungs. Dangerous work, indeed. But prisoners were easily ordered. Easily worked. Easily disposed of.

The foreman in the towers thought it was a pretty good deal. And it was… until the time portal suddenly broke down.

No more time travel meant no more prisoners… but it also meant no more guards. No more supplies. No more bullets. The miners had already grown used to living off the bare minimum, and when they saw their captors starting to struggle with that reality, the revolt started. Five hundred desperate men and women versus three hundred scared and confused fools. It was bloody. It was quick. It was not pretty.

Penal Corp 0-12 fell without any other settlements noticing. The guards were killed. The administrators were killed. Everyone who didn’t come to the settlement in chains was killed. The prisoners took over the facility and took on the name Rattlers (due to chains they used to have to wear).

Penal Corp 0-12, or as it is called now, Sing Sing, has evolved to a town of raiders and barbarians. Hell, cannibalism isn’t even off the menu to some men in the group. The Rattlers are a vile sort who resort to murder and pillaging to survive in the prehistoric era. And while the majority of the group are thugs, murderers, and thieves, the most dangerous is the leader.

Kirk Levitts was a political prisoner back in the future. A genius with a belief that all governments were destined to be oppressive, he led a rather successful anarchist movement until his capture. To rid the future of him, he had been shipped back with the rest of the prisoners SATI purchased. It was he who first planted the seeds of rebellion in the miners’ heads. It was he who led the charge. And even in his advanced age, he still leads the Rattlers.

Kirk Levitts is most likely the sole reason the Rattlers hadn’t eaten themselves alive. Yet the man is getting older. Weaker. And some of the factions within the Rattlers are starting to smell blood. Kirk Levitts knows when he passes, the Rattlers will probably go to war one last time. With themselves.