Chris Griesenger, friend of the Fandible crew and budding game designer, launched a Kickstarter for his new game Reclamation a few months ago. By the end of it in December, he almost doubled his goal and put all that money to bring Reclamation to life. After months of work putting the finishing touches on the game, it’s now ready for release. If you like the idea of living and fighting in a post apocalyptic world with everything from intelligent nanite swarms to magical secret societies, give it a try. I promise you wont be disappointed. Plus, as a added bonus, the Fandible group makes an appearance. How can you not want to play in a game with your favorite role-players. 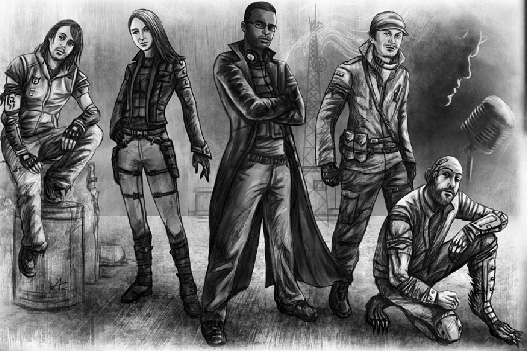 From Left to Right.

Billy: Roach Coffman  ( You know why he has that smug look, because he just thought of a funny way to kill you.)

Angela :  Ms. Lynn (I’m not just saying she is smarter than you, I’m saying she figured out your plan before you thought of it.)

Jesus: Jerres Rodrin (If manipulation is an art, he is its Picasso)

David: Dale Dunovan (He goes where others wont to find what many have forgotten.)

Daniel: Danny Rodriguez (He didn’t stop, he is just waiting for the rest of the world to catch up)

To find out more about the game you can go to:

And if your interested in purchasing it, you can get the book or PDF from:

Lulu.com or Drive Thru RPG