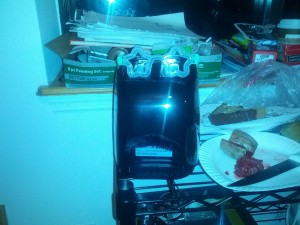 One of the biggest surprises the Fandible crew has received in a while is the idea that people like us enough to want to give us stuff. A fact that just blew our minds.

A few weeks ago Fandible fan Lucek contacted us and stated he wished to give us a gift for our roleplaying awesomeness. As well as jokingly (we thought) mention he would like to provide us with a toaster, because toast is a staple of the role-playing diet. Awaiting whatever gift Lucek wished to bestow, we got a box in the mail, containing two games Lucek and others had mentioned previously. Kingdom of Nothing, the game of magic Hobos in the big city, and Don’t Rest your Head, because Lucek obviously believes sleeping is a sin and wishes us nightmares for all eternity. Two great games that we will look over and consider because they seem like a great fit for the Fandible crew.

We also received the toaster, pictured above. Before deciding what to do with it, we decided to game Â and started running our Rogue Trader session. As usually happens after a Rogue Trader game, we started to drink. No honestly, I started to drink and the crew politely followed. Now this isn’t because of any hatred of Rogue Trader. I love the universe after all. Its what the Fandible crew does that makes me want to drown my sorrows. A fact you will all understand when the game posts next month. I bet you can guess where my soul died just a little.

Either way, the drunken night led to the toaster being christened Sir FandiToaster, official toaster of the Fandible crew. We also gave him an evil mustache, for as we all know, evil toasters give the best toast. The toast of darkness. Also, the knife and red stuff, totally just kitchen preparation and not a bloody fruit sacrifice to our new toaster overlord. We swear.

Thanks for the games and the toaster Lucek and thanks for being a fan.