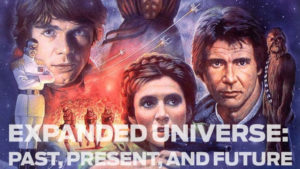 Before Star Wars 7 & 8 came out, there was something known as the Expanded Universe. The Expanded Universe in Star Wars was the collection of lore that was carefully organized by Lucas and Company so that the entire series had just one canon to follow. Now there were certain levels of canon – some stories were considered 100% true to canon. It took place in Star Wars and affected the galaxy! Some stories were marked as ambiguous – it wasnâ€™t considered NOT canon but it wasnâ€™t popular lore (yet). Then there was the silly stories such as Han Solo meeting Indiana Jones. These stories were considered non-canon and were never actually brought into the overall Star Wars Lore. They were one offs – fun little â€˜what ifsâ€™.

I give this rather simplistic explanation of how Star Wars managed canon because usually when a person brings up the Expanded Universe, people start bringing up how the Expanded Universe was trash because it had â€˜Weeping Mountainsâ€™ (Ewok Cartoon – not canon) and Sparky the Droid Jedi (a comic – also not considered canon). The Expanded Universe was an incredible intricate web of stories and lore brought together from games, books, short stories, and more – and while it had its fair share of missteps, I still appreciated it. 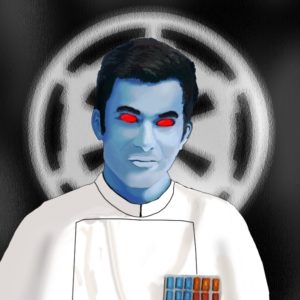 The good news about the new Star Wars Canon is that they sometimes borrow things from Star Wars Legends. And one of those things is Grand Admiral Thrawn, the Chiss mastermind who served the Empire. Thrawn does exist in the new Canon. He has his own book, Star Wars: Thrawn, and heâ€™s become an antagonist in Rebels: Season Four.

So Thrawn and his alien race, the Chiss, exist still.

But what Iâ€™m going to miss is the Thrawn Trilogy written by Timothy Zahn. His first three books in the Expanded Universe took place five years after Return of the Jedi. And let me tell you, they were brilliant. Some even consider Timothy Zahn to be the savior of the Expanded Universe. His books were the first to really explode in popularity, and you would have a Â hard time finding someone whoâ€™s added more popular characters to the Star Wars universe. He created Thrawn, the Chiss, Talon Karrde, General Pellaeon, the Noghri, and most importantly… 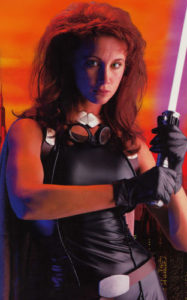 I know I could have kept Mara Jade in with the Thrawn Trilogy, but I feel like Iâ€™d be doing the character a disservice. Mara Jade is perhaps one of the most beloved characters in the Expanded Universe. Originally trained to be an Emperorâ€™s Hand for Emperor Palpatine, Mara Jade learned to overcome her darkness and become a Jedi. Not only that, but she also won the heart of Luke Skywalker.

She was a Jedi, a former-smuggler, a wife, a mother, and an example of a fantastic character who showed up in a variety of Star Wars novels. It is unknown if Mara Jade will be brought back into the official Canon… if she is, her story would most likely be drastically different. Regardless, fans are hopeful to see this fiery Jedi return one day. Â Â 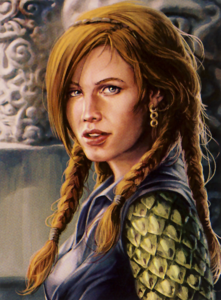 This might not be popular, but I loved the character Tenel Ka. Her mother was from Dathomir, her fathers was from the Hapan Cluster, and she was a badass warrior queen. She first got her story started in the Young Jedi Knights series which I grew up on, and she was later adopted into the New Jedi Order books.

They could bring her back, but Iâ€™m going to miss what her original story was in the Expanded Universe. She fought with a Rancor-toothed lightsaber, never backed away from a fight when her friends were in trouble, and knew how to make sacrifices for the ones she loved – especially for her daughter.

Before Ben Solo, there were three other Solo children. Jacen and Jaina Solo were twins, and later on, Anakin Solo was born into the family. Starting with the Thrawn Trilogy, we got to grow up with the Solo kids. We watched them grow from adventurous kids to adults with some truly compelling stories. We suffered when they suffered, cheered when good things happened to them, and I, personally, felt invested in their stories.

Sadly, their story is done. Itâ€™s gone. With the new films, a new canon has been born, and it’s one that doesnâ€™t leave room for them. So the kids are gone and have been replaced with Ben Solo. And while Kylo Ren is growing on me, I can easily say he has a long way to go until I become invested in his story as I was with the original Solo children.

Okay. Okay! Before you start yelling at this blog post, let me say this – The Yuuzhan Vong War wasnâ€™t perfectly executed. It took time for me to actually enjoy the New Jedi Order series where the war took place. Some books were a slog to get through in the beginning…

But dammit, the Vong War did something new without wiping the slate clean. It didnâ€™t just throw away forty years of Expanded Universe because it wanted something different! It gave us an enemy never seen, killed some beloved characters, and completely redrew the map of the Expanded Universe. By the end of the Vong War, we got to see some of our most beloved characters come to grip with some truly dark things.

The Yuuzhan Vong might be brought back into the new Canon. In the previously mentioned Thrawn book, he does talk about an enemy the likes the Empire nor the Republic has ever faced. However, the New Jedi Orderâ€™s Vong War wonâ€™t be coming back.

Now this article wasnâ€™t meant to say I hate the new canon. I donâ€™t. This article was meant to highlight the things that I think the Expanded Universe (now Legends) did right. How was my list? Did I forget anything that youâ€™ll find yourself missing in the new establish Star Wars canon?