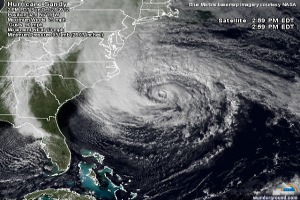 The original name for this post was going to be â€œHurricane Sandibleâ€, a cheeky reference to the tropical storm that recently ravaged the east coast of the United States. When I first considered writing about the storm I was fighting off a mild hangover from the previous nightâ€™s impromptu party at my neighborâ€™s apartment, one in a string of such revelries during what was dubbed the â€œHurrication,â€ when the crippled infrastructure of New York gave many people a perfectly legitimate excuse not to show up for work for a few days, myself included. With my neighborhood in Brooklyn cut off from the rest of the city due to a total lack of viable transportation and an influx of refugees from the darkened lower Manhattan (deemed â€œSoPo,â€ or â€œSouth of Powerâ€) suddenly needing a place to stay and a way to forget their worries, a lack of reasons to celebrate became the perfect excuse to do so. People gathered in a neighborâ€™s apartment to read H.P. Lovecraft aloud by candlelight, those still with internet and power had movie parties and impromptu karaoke, and the more stalwart bars opened their doors with the promise of two-for-one Hurricanes and trivia contests. As far as I was concerned when I first started writing this, the worst that Hurricane Sandy did was take away my ability to meet up with Fandible and play make believe for a few weeks. A week later I scrapped the jokey nature of this post for something different.

The settings of role playing games are often one of a world that mirrors our own but is fundamentally different in a few ways. White Wolf games often accentuate the despair and hopelessness of a world where monsters are real and that which is accomplished is ultimately meaningless, Shadowrun (a personal favorite) shows us a future that has forced myth and mayhem into the desperate normalcy of a perpetual dystopian riot, and Part-Time Gods asks you to balance the responsibilities of a deity with the banality of everyday life. These games, as well as movies, books, television and others, ask us to believe that these things could happen, and we often follow along with a cynical squint.

A game is set during a blackout and your characters are going to pull the ultimate heist, or youâ€™re teenagers at a home who have to escape from intruders because no help is coming. These settings are funny, in a way, because thatâ€™s not how things could actually happen. Itâ€™s a setting for a game. Itâ€™s weird. Itâ€™s not going to happen in real life. Thatâ€™s the point.

The reality of the damage from Hurricane Sandy and the cityâ€™s subsequent recovery efforts showed me that these ideas are not so outlandish at all. Twice I drove through the lower East Side of Manhattan on my way home from work and was stunned by the pitch darkness. Luxury condos and average apartment complexes alike were rows of darkened windows reaching upwards, often with one lonely candle illuminating a single point as police officers covered the darkened streets, directing traffic in the harsh light of road flares and investigating the smallest signs of social unrest or criminal activity. I even saw a pub proudly displaying itâ€™s gas-powered electric generator in front of a large hand-drawn sign that declared â€œWe have power and whiskey.â€ The next night the gas shortages had hit the city and the barâ€™s windows blended into the shadows.

This all came from a storm that paled in comparison to others that had struck parts of the country in recent years, but still we were turned from the Greatest City in the World to charred city blocks that claimed more than eighty homes, gas lines monitored by small armies of police and a broken transit system that stranded my neighborhood and others like it from going anywhere. It was surreal to say the least, especially as the days went on and the severity of the damage became apparent.

I even witnessed the electric transformer explosion that led to the lower East Side becoming SoPo. I was socializing with my neighbors during the height of the storm when, like a fool, I decided that standing on my buildingâ€™s roof was a good idea. I was wearing the costume I had intended to wear for Halloween and was laughing and trying not to spill my drink when the sky erupted into light, clearly emanating from a point across the river in Manhattan. I remember looking at my friend (the only other fool in the group to follow me) and watching the bravado drop from his face. After using every expletive in our repertoire we realized that we were ridiculously dressed, drenched, and scared.

Days later, on my second trip through SoPo at night, I casually remarked to my girlfriend that this would all make a great setting for a game. â€œNo, it wouldnâ€™t,â€ she responded. When I asked her why, she simply said â€œbecause itâ€™s not beyond our imagination anymore, itâ€™s real. This is really happeningâ€.

(A note from the Fandible Crew: While we all made it through the storm unscathed, much of New York City and New Jersey is still in need of help. If you haven’t already, please consider donating to a charity working in the area, such as The Red Cross.)