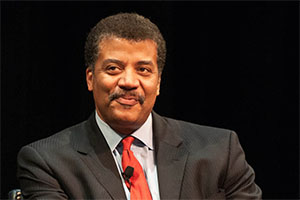 So far, this would be the eighth time I’ve rewritten the start of this letter. Please, don’t even ask how long I debated on how I should entitle the letter. I wanted to come off as witty, smart, suave, and perhaps even show that extra ‘something’ to make my letter pop out more than the others you’ve gotten (though, it’s hard to top the death threats you received from 3rd graders concerning Pluto). In the end, though, I realized that the best course of action would be to take a page out of your book and just be honest. So, without trying to ‘gussy’ this letter up, I’m just going to come out and say that you’ve motivated me.

I wish I could say I was an astrophysicist. Heck, I wish I could say I spelled astrophysicist correctly the first time without the help of a spell-checker. However, the truth is that I’m a twenty-nine year old who works in publishing. However, it is because of you that has allowed me to rediscover that part of myself that I had forgotten: the scientist. I remember when I first moved from the city to a farm house in Ohio. I would look up at the stars in complete wonder and have myself bogged down with questions. How many stars were out there? How many of those stars had planets like our own? If my dad were to get cows, would I need to be fearful of UFOs? These questions slowly dissipated as I grew for a number of reasons. Perhaps I just got used to the starry nights. Perhaps it was due to having science teachers who said things like the Big Bang was a ‘cute’ idea. Whatever the reason, my curiosity in the sciences diminished.

When I first saw you, I believe it was on ‘The Colbert Report’ or ‘The Daily Show’. All I remember from after watching the episode was the feeling that it was nice to see an intelligent man who made science not only understandable but absolutely fascinating. Then while watching other programs, you began to pop up again! And each time, I found myself completely drawn into whatever subject you were addressing regardless if it were Pluto or the last days of man. My wife and I soon started keeping an eye out for any news programs that were going to have you on as a guest, and we picked up your books to read. Living in New York City even allowed me to enjoy the Hayden Planetarium and Youtube has allowed me to catch up on any programs I’ve missed.

You have opened up my eyes to the world I thought I had lost. Though I love that I’ve pursued a career in publishing, I am happy to know that a part of the scientist inside me not only lives on but grows a little every day.

So thank you, Doctor Tyson. I know your hero has always been Isaac Newton for his contributions to Man. Know that you’re a personal hero to me for this same reason. You have one of the most important responsibilities presently. You are the voice of science. You and a select few. Make the world understand. Make us want to understand. Make us discover the scientist inside us all just like you helped me rediscover my own.

You made the right call on Pluto.