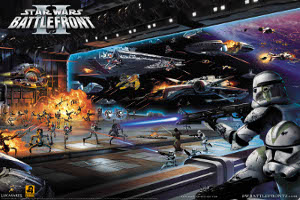 Let me be perfectly honest: I love powers. I love them. While other members of Fandible may forgo certain in-game supernatural wonders (Angela hates magic, Billy hates time travel, Jesus hates me, etc.) I have been very vocal in my affection for fantastical and supernatural abilities. Super strength? Rad. Mindreading? Itâ€™s the new black. An ability to jump high and fall far? I donâ€™t care that my character is in a wheelchair, just give me the goddamn power.

Let me clarify something else: I love Star Wars. I love the silly things (if nothing stops bolter fire then why do people wear armor? Is there a lot of knife crime among stormtroopers?), the technology, and of course, the Force. I even like parts of the new films, like the inspiring story of a young whiny intern who, after a work-related accident, becomes a cybernetic James Earl Jones. I mean, Anakin Skywalker annoys the living hell out of us for three films and then gets his legs chopped off and his body lit on fire only to wake up the galaxyâ€™s biggest bad-ass who sounds like Mufasa? They should have gone the extra heart-warming step and made a DVD extra where Vader finally goes back to college to get his degree (send your hate mail to dave.fandible@gmail.com).

I digress. The one anomaly here is my total and absolute addiction to the video game Star Wars: BattleFront. This game features players as nameless soldiers trying to win battles in different environments within the Star Wars universe. Itâ€™s basically Call of Duty with Ewoks. Itâ€™s power lies in its ability to put the â€œwarâ€ into Star Wars as countless people fight and die every moment, striving to accomplish a task for their army. My adoration for this game made me realize something about my approach to tabletop gaming that I had long forgotten: I gravitate towards powerful roles, but that’s not always a good thing.

The settings for our role-playing games often involve some larger struggle, from the local (for example Part-Time Gods, where we are terrified of leaving our town) to the expansive (Iâ€™m looking at you, Warhammer 40k). When playing in these narratives itâ€™s often my desire to play some vastly important role, an unmitigated badass of incredible scale that reflects the kind of prestige main characters usually have in videogames. This can lead to a kind of stats-and-powers arms race, however, as every new character in every new game must be as powerful if not more so than the last one. Thatâ€™s when you start buying expansion books for Exalted and coming up with house rules for planetary bombardment. Thatâ€™s when you have a problem, and thatâ€™s when you might have forgotten something.

Thereâ€™s a war on, and itâ€™s not just fought by the few.

The thing that I love most about Star Wars: Battlefront is the feeling of nigh-insane desperation. There are overall objectives (such as take a checkpoint) that serve as a table for the buffet of pain that offers the smaller, more transient but equally as pressing small objectives (like â€œsteal that guyâ€™s speeder, point it towards the checkpoint that lies on the other side of this densely wooded forest, hit the accelerator and holy shit may the Force be with you). You play the little guy (or girl), armed with only your weapons and one or two skills. Thatâ€™s it. No Force, no cybernetic hand waiting for you if this one gets blown off. Nothing. Just walking to your A-Wing might get you killed.

This applies to table top as well. The story of struggle and triumph against all odds is something that people enjoy being a part of, when ingenuity and conviction replace spell casting and people are reminded that they are pretty goddamn clever. This is the stuff where the best stories are made, the kind of shared narrative that you and your gaming group will remember for a long time. The triumphs of a century-old God-Killer? No big deal, thatâ€™s what he does. It says so on his card.

The time your group of engineers killed a god? Now thatâ€™s a hell of a story.