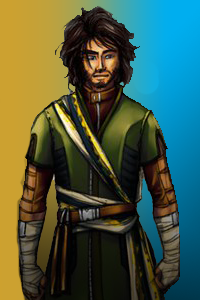 You donâ€™t like the feel of the robe – but really, have you ever liked the robes? You arenâ€™t sure what they are made out of but you know that the fabric comes from plants on the mountain. It scratches your skin throughout the day, and at night, you find blotches of red irritated skin. Stargazer Nerrian tells you that you will grow accustomed to the fabric – like all before you – but still, it doesnâ€™t help you now. The robe youâ€™re being forced to wear now is thicker than your usual one. You also arenâ€™t supposed to get it torn or dirtied.

Varick doesnâ€™t look very comfortable either but you know he would never say anything about it. He just stares straight ahead as the ceremony begins. He was always the â€˜goodâ€™ brother – in the church and now here. Â You try to do the same but you were never one to listen to sermons and bow your head to ceremony. No, you were one to run wild and swing from the Evoaâ€™leris vines that hang hazardously over the cliff face.

Varick enjoys that stuff too – he just doesnâ€™t admit it.

Stargazer Nerrien stands between the two of you, a hand on each of your shoulders. You know heâ€™s only standing here in order to keep you in place. He might be gripping Varickâ€™s shoulder too, but itâ€™s mostly for show. Youâ€™re the true chaotic nature here. Youâ€™re the only one in need of Nerrianâ€™s anchor.

You canâ€™t escape. You canâ€™t sleep. So you are forced to watch the ceremony. Itâ€™s apparently important – but they say that about all ceremonies and ritual here. Even eating riaâ€™kati berries in the morning is ritualistic. You might only be twelve years old but you know breakfast shouldnâ€™t be considered a ritual.

The couple standing in front of everyone has their hands pressed against each otherâ€™s foreheads. You know theyâ€™re a couple because only couples get to become Unified. The two men try to remain calm throughout the ceremony but you can see the smiles touching their lips and the tears in one of their eyes. This is a big deal to them. And looking around, it seems to be a big deal to everyone.

And so you lose your focus as the ceremony continues. A passing gapi-be floats nearby, itâ€™s fleshy sack sucking in the wind only to expel it quickly in order to launch itself higher into the air in order to capture more wind. There is a lesson in that. Youâ€™re sure of it. But for now, youâ€™d rather focus on how cool its tendrils look in the sunlight.

Stargazer Nerrian crouches down next to your ear to whisper. Your attention snaps forward, and you do your best to imitate Varickâ€™s posture.

The couple is now placing their hands in jugs. A nearby initiate moves forward and pours soapy water into the jug, and one of the men yips at the temperature of the water. The monks donâ€™t live up to the stereotypes that Glavis bestows on them; they laugh. Itâ€™s a moment of levity that you join in on.

The two men begin cleaning each otherâ€™s hands, whispering vows that only they can hear.

â€œTheyâ€™re scrubbing away at that last barrier that keeps their souls from unifying,â€ Nerrien whispers, his hands tightening on your shoulder. His grip now isnâ€™t that of an elder trying to silence a boy – no, itâ€™s that of a person who is excited. Like a child offering presents to their mother on their birthed date.

You know the answer but youâ€™re just trying to get Varick to snort. He doesnâ€™t. He just shoots you a stare before turning his attention back to the ceremony.

Nerrien chuckles though. So thatâ€™s something.

â€œNo, no. Just the hands. And itâ€™s merely ceremonial. Those two have been Unified since the day I found them arguing in the valleyâ€™s hutapes.â€ He chuckled again before shaking his head. â€œBoth of them stubborn. I figured theyâ€™d either Unify or kill each other.â€

â€œWhy would one Unify with someone they hate?â€

It was Varick who asks the question that you are thinking.

â€œTo Unify your soul, child… itâ€™s to accept that your soul was mirrored and put into another,â€ Nerrien says, dropping his voice a few more degrees as the monks around them begin to chant.

â€œNo, no. You are two halves of a soul. Varick holds qualities that you do not, Vekis. He is silent. You are loud. He hesitates. You do not. You both are one individual placed within two shells in the name of the Twins.â€

â€œSo who is the pretty one? I hope it isnâ€™t Varick.â€ You canâ€™t help yourself. Varick shoots you a glare but Nerrienâ€™s chuckle dissipates it. Â Â

â€œYou know that is not what I mean but as for Unifying with someone you hate… I would hardly call it hate. Sometimes your worst critic is yourself. Sometimes your worst enemy is yourself. And sometimes, seeing the same qualities in you within another is hard to accept.â€ Nerrien let out a sigh. You look back towards him and find him smiling, a single tear running down his wrinkled cheek. You follow his gaze and see that the couple has finished with the bathing of the hands. One of the men reaches out with soap-covered hands and â€˜boopsâ€™ the other on the nose.

More laughter echoes through the mountain.

â€œBut if you can look past your own flaws, you can see what makes you beautiful. And wonderful. And there is nothing in the world that would keep your from Unifying,â€ Nerrien adds after a minute.

â€œExcept if you donâ€™t have soap apparently,â€ you mutter.

So you reach out and push him. And he pushes back. And then Nerrien is gripping both your shoulders again, squeezing it until you and Varick return your attention forward.

â€œSo does that mean they can have sex?â€ you ask – probably louder than you mean to. A few monks in front of you stifle laughter while tossing glances your way. Your cheeks burn red, and you point towards Varick, blaming him.

And you do. Sex was bad. Fun was bad. Comfortable clothing was bad.

You roll your eyes before asking, â€œYou think sex is beautiful? Stargazer, heâ€™s in heat like a perky kolâ€™bulled!â€

â€œI didnâ€™t say that! I meant the ceremony!â€ And with that, Varick pushes you hard resulting in you falling off the bench and onto your butt. You immediately jump to your feet, reach into your pocket, and grab a handful of sand before tossing it into your brotherâ€™s face! The sand connects, your brother sputters, and before you two can launch into each other, Nerrien hauls you both up by your arms.

The ceremony stops. And you feel all eyes on you. So does Varick cause he is doing that thing he always does when he gets in trouble – he lowers his head. You donâ€™t do that. Instead, you raise your chin up defiantly.

â€œThe boys seem to have become overly excited over this Unification,â€ Nerrien began as he hauls you and Varick back. â€œThe Twin gods have blessed this Unification by offering us an easy choice on which two will be peeling tubers for tonightâ€™s meal.â€

And with that, he leads you away. Varick shoots you a look and you shoot it right back.