We all remember our first RPG. For most of us, it was in high school, for many more, in college. A few of us even came into the hobby as full grown adults, with jobs and kids and mortgages. But whenever it was, there was always that first game, that first time we sat down with others, pulled out a pack of dice, some character sheets, and said those four magical words: “I loot the corpse.” 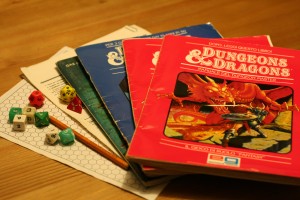 I started earlier than most. My dad had played Dungeons & Dragons, and then Advanced Dungeons & Dragons (1st Ed.!) in college, and though he left his gaming days behind him after he got married and had kids, I was lucky enough to get his books as hand-me-downs. It’s not inaccurate to say that I actually learned to read with the AD&D Dungeon Master’s Guide and the Monstrous Manual. You know the one, with the kind of goofy red dragon, and the unicorn and the centaur and the troll and the bugbear and the- well, I’m getting sidetracked. The point is, while the other kids were reading Dick and Jane

I was busy reading about saving throws and encounter tables and Wands of Wonder.

It wasn’t long before I was spending every moment I could dreaming up adventures, turning every sheet of graph paper I could get my grubby little mitts on into a dungeon map, and needling my friends into joining me to play after school. What we ended up playing, being young children with no adult supervision, was only barely recognizable as D&D, of course. It was more along the lines of playing pretend with an occasional roll of the dice to settle arguments. I was a generous Dungeon Master, and every foul beast my friends slew all but exploded with massive amounts of loot. Magical items lay under every rock, and not a single chest went by without some wondrous relic within. I didn’t limit myself to what was in the books, either. If the book showed me a magic item? I could make a better one, oh yes I could. Wand of Wishing? Bah. How about a Wand of Super Wishing, which was immune to the power of lesser, non-Super Wishes, and which could reverse any Wish? Holy Avenger Vorpal Sword +5? Meh. Holy Avenger Vorpal Sword +5 (+10 against Dragons) of Tiamat. It could shoot any one of 5 different breath weapons once per round, unlimited charges.

Oh, and it got better. I stole liberally from TV shows as well. If I’d just seen Captain Planet, the quest that week would be recovering the 5 Rings of the Elements, each one having ridiculous powers like summoning and controlling massive elementals at will. The Paladin of the group (of course there was a Paladin) had a suit of armor that was sentient, and could fight on its own, and was also immune to gas/electricty/magic. He’d also made a Super Wish, because of course we were kids and half the fun of the game was trying to break the system and outsmart each other: if he ever died, the Super Wish would find another body exactly like his, transfer his consciousness to that body, transfer all his items to it, and then teleport the identical body with the Paladin’s mind in it and all the items back to where he had died the next round. Oh and the body would have all the same levels and hit points of course.

Oh, this was all during like 3 rounds of combat with a demon lord, by the way.

By today’s standards, we were doing everything wrong. Ignoring theme, making up rules as we went along, completely disregarding even the idea of game balance. But we had a blast. And if you’ve been listening to our show for a while now, I think you probably know why it is that I love being a part of Fandible so much. While we may not play quite as hard and fast with the rules as me and my buddies did after school in 4th Grade, and we at least try to pay lip service to the rules of whatever system we play, in the end this is a group where having fun and telling a ridiculous and wonderful story takes precedence over the system itself. And I wouldn’t have it any other way.

So! Let’s hear from you guys: what was your first gaming experience? Was it a by-the-book wargame, a freeform indie game, something in between? And where do you think the balance lies between playing the game by the rules vs. just having fun (and how well do you think we manage to hit that balance)?

Also: the end of the month approaches quickly, and that means it’s time to hand out rewards to our delightful Patreon backers! If you like what we do, and you have a couple of spare bucks laying around doing nothing but burning a hole in your pocket, I can think of many worse things you could do with that money than to give some of it to us! Any contributions you guys make go towards keeping the lights on and keeping the pizza flowing every week, and there are all manner of amazing rewards for our supporters at every level (with many more to come!). If you can’t donate, that’s okay, we still love you almost as much. What we do appreciate just as much as your shiny, shiny dollars, is having you spread the word about us far and wide! Review us on iTunes, post about us on your favorite forums, blog about us, tweet about us, LikeÂ Â us on Facebook, +1 us on Google+, do whatever it is people do on Orkut. Every new convert to the Cult of Fandible is one less person who will die screaming in the fires when we- wait, I’ve just been handed a note by my editor, looks like we’re not allowed to talk about the fires. Or the screaming.

6 comments on “You’re Playing It Wrong!”