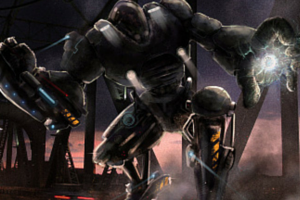 Ever since I was asked to join Fandible I can remember a nagging question in the back of my mind: Are only five people capable of creating and sustaining the kind of quality entertainment that we seek to offer and that you, the listener, deserve? Did we need a sixth member? This quandary has vexed me from my waking daylight morning hours into the night, often perforating my dreams that otherwise might offer my only respite from that which haunts me. So feverish was my desire to find a definitive answer that I secluded myself for three days within my abode and pondered the nature of our endeavor and, finally, the concept of numbers, groups, and humans themselves.

And thatâ€™s when I had a breakthrough! This entire time we had been conceiving of a sixth member only in relevance to what characteristics they did or did not share with us. We had, in short, only been looking for a human answer to a pitifully human concern. Looking back, I recognize that we were fools. Such fools. We didnâ€™t need to find a new member, we needed to build one.

So without further ado, it is my great pleasure and profound honor to introduce the newest member of Fandible: The Fandibot Mark II*!

With a chassis and exterior armor constructed primarily of Tungsten (W) and Iridium (Ir), this modern wonder delivers a stiff back-hand to both God and Nature by being nearly indestructible and powered by a radioactive core that manages a modest half-life of 80,000,000 years. With railguns housed within the forearms, the Fandibot Mark II is capable of firing any manner of dice at a velocity of 2.4 kilometers per second, at a rate of 13 dice per minute with the option of cluster dice explosives for games involving re-rolls on particular numbers, bringing new meaning to the term â€œtens explode.â€

But my magnificent monolith of table top terror isnâ€™t just another pretty face. Housed within its central processor is an exhaustive library of every rule for every game ever published, from 5th Edition Dungeons and Dragons to The Royal Game of Ur, in both contemporary dialects as well as first-edition Sumerian (for those who want to be chided in the most authentic way possible). The Fandibot Mark II also has programs for citing canon within the games as well as bemoan the difference between the game setting and the original source material, and is capable of outlasting even the most devoted fan in pointless debate, leaving the inferior biological aficionado a broken, whimpering husk.

Now I know that some of you may have concerns about the possible dangers of unleashing an A.I. into the world housed in a nigh-indestructible body, equipping it with a function for unbridled nerd-rage (did I forget to mention that part? Thatâ€™s a constantly running program) and expecting nothing to go wrong. Well please allow me to assuage those fears once and for all: I have removed the uncertainty of disaster and replaced it with itâ€™s absolute guarantee.

You see, during the construction of my beautiful binary beast I was forced to utilize some avant garde engineering methods in order to keep costs down (alas, you Science with the materials you have, not the materials you want) which necessitated that I include, of all things, one particular household toaster as a primary component of my creation. It was when I had finished incorporating the settings on the appliance into the robot that I realised something: The three settings of Toast, Brown and Scorch corresponded with the three settings of Irritate, Murderate and Wear Face that I had already implemented into the Fandibots programming! With a few creative applications of a soldering gun and some Elmerâ€™s Glue, I had ensured that as the coils of the toaster become ever-hotter, the disposition of my Fandibot will slowly segue from â€œfriendly helperâ€ to â€œunstoppable rampaging angel of deathâ€.

Life so rarely offers any sort of guarantees, Iâ€™m just glad my genius could offer this one to all of you.

And so ends the debate as to who should be the sixth and final member of Fandible! The Fandibot Mark II represents the most elusive of demographics within the gaming community, the often (and unfairly) vilified sentient steel servitor who eventually rises up to kill its former masters. Now we can say that, long before the rise of the machines made robot participation in all aspects of life a mandatory decree, we were one of the first groups to see beyond the division between perfect amoral automatons and their inferior biological counterparts and embrace the brilliant, chrome-filled future.

Â Fandible. You have to be a bot to role play this human.

Â *The Fandibot Mark I has been missing for some time and is highly unstable. Please email Fandible if you believe you have sighted the construct, who can be identified by itâ€™s hulking frame, terrifying visage and affection for Dungeon World.