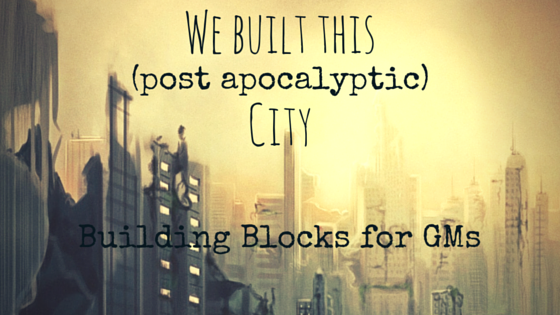 I have a ton of fun running (and playing!) The End of the World series of games. A lot of things contribute to that fun, from getting to bust out a wild accent to play Kevin’s sister to getting to use my very geekiest passions to unleash hell on my friends. But some of the most fun is figuring out how to turn my city into an apocalyptic hellscape.

The End of the World is different from almost every other game I’ve played, in that you’re explicitly playing normal people. You’re not even “better than average,” you’re just plain ol’ you, warts and emotional baggage and all. While Fandible has elected to play fictional characters rather than ourselves (every game would have to start out with me dying, after all. Visiting Sammy’s is way more entertaining), I’ve still chosen to set each session in the real-life neighborhood we play in. Every time the group seems like they’re about to get out of New York City, the session winds down. Fandible’s version of The End of the World is all about transforming theÂ bustling metropolis from New York City to Post Apocalyptic City.

As Jeff Goldblum observes in the new Independence Day: Resurgence trailer, aliens (or any other kind of world-ending scenario) “likes to get the landmarks.” Destroying iconic monuments makes for flashy set pieces and gut-wrenching twist endings (I’m looking at you, Planet of the Apes). It’s also an easy shorthand for just how powerful these destructive forces are, as they can destroy in mere moments what it took humans months, or even years, to build. Whether it’s a long-running commentary on the hubris of humanity to try to leave a lasting mark on the planet, or just an illustration of how far special effects have come that there are always new and innovative ways to destroy the Golden Gate Bridge or the Sydney Opera House, I’ll leave that for smarter people to decipher.

I’m just here to list my advice for building up (and tearing down) a post apocalyptic city in your role playing game.

This is especially important if your post apocalyptic city isn’t the one you and your players live in, but all post apocalyptic games need to establish the status quo before you can go shaking it up. This is why Fandible’s End of the World games always start in Carter’s apartment. Set the stage for what normal looks like (it’s always a liiiiittle bit different in our series, before things start getting weird around the time of the trip to Sammy’s), make sure everyone’s feeling comfortable, and then let the meteors start to fall and destroy everything the characters have just started to establish they love.

2. Make the Familiar Turn Against Them

Aliens invading from outer space? That sucks, but it’s a clear-cut enemy that your players can rally against. Less clear-cut? When a beloved pet starts acting funny, or the house starts to fall apart, or cultists are hiding in the basement of the White Castle, those areÂ more difficult to recover from.Â Having your players off-kilter is the payoff if you did your homework in step one, as this begins to illustrate how the shit has hit the fan.

Not justÂ the big flashy ones that the genre-savvy among you will know to avoid, but the smaller ones that will make your setting really come alive. Have you ever received directions telling you to “turn right at the old gas station” or “if you see the Coca-Cola billboard, you’ve gone too far”? Establish those landmarks in the local area, and other important outposts like hospitals, churches, grocery stores, and police stations – all of the places survivors in a post apocalyptic city may turn for aid. Whether they find aid, comfort, or safety there is, of course, up to the GM.

Running low on resources is a staple of the post apocalyptic genre. Immortan Joe holds thousands hostage by controlling the water in Mad Max: Fury Road, and The Walking Dead alternates between feast and famine for resources from food to baby supplies to ammunition. If, as in half of the scenarios in The End of the World, your characters are experiencing the apocalypse as it happens, they may not realize they need to start hoarding. Or maybe they start out with good intentions, but don’t guard their stuff with enough force and someone a bit savvier comes along and takes it all.Â The geography of your city that you laid out by establishing landmarks will help you figure out where resources are scarce – and where they may be abundant. Every once in awhile, the survivors of the apocalypse should find the equivalent of a Left 4 Dead save point – load up on some good stuff, by begging, borrowing, or stealing, and then go back out to face the horde (and use up and/or lose all that good stuff along the way).

apocalypse GM advice The End of the World