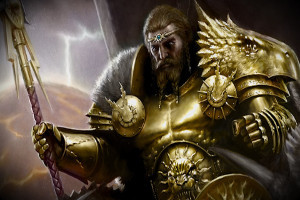 A beard that is almost dwarf worthy.

A couple of months ago, Games Workshop blew up a world. Specifically, they blew up one of its oldest properties, Warhammer Fantasy. The old world was replaced by Age of Sigmar and a whole new tide of lore was being created to support it. The question is why? Was it a quest to tell new stories? Was it an urge to showcase their ability to take chances on their properties? Sadly, the reason was a bit more financial.

With the flagging sales of the Warhammer Fantasy miniatures game, the series needed a reboot. A way to attract new fans and possibly update the rules and the miniatures towards a more modern feel. It was also a way to re-brand all their races into more copyright-friendly forms. Seriously, no one turns dwarves into “Steamhead Duardin” unless they really want those creations to be legally theirs. It would be like turning elfs into Aelfs….oh wait…

And, lets just say there are enough similarities to this reboot and another Games Workshop property that a few fans might think they are trying to ride the coattails of their sister games success.

Now, due to a lack of time and money, I never could get into the actual miniatures game. I did, however, like reading some of the stories in that world. The story of Gotrek and Felix being a particular favorite of mine. Sadly, I started tapering off over the years and it wasn’t until the end times novels that I started really getting back into it. The five books went through the destruction of the old world and it was fun seeing nations fall, heroes die, and people just not having a fun time during the apocalypse.

By the end, the old world was gone and it was replaced by a new one. A world I was beginning to like for a variety of reasons.

1) Shift From Light to High Fantasy 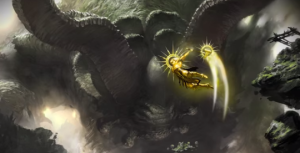 Angel vs Giant Demon. F**k it, lets do this!

The original world of Warhammer was a dark and gritty place that looked a lot like the middle ages in some respects. If the middle ages had monsters waiting in the dark places getting ready to eat you. Magic existed, but it didn’t feel overwhelming in most cases. You were better off depending on your sword arm then the fickle nature of magic. Age of Sigmar is a bit different.

As Billy mentioned in his previous article, I tend towards the cronut version of fantasy. The more magical and weird a world is, the more interested I am in reading about it. Age of Sigmar takes the magic of the old world and cranks it up to asparagus. The universe has 9 realm just floating in the warp. Each one with a theme based on one of the winds of magic. The world of fire might have volcanoes and lava rivers. The world of shadows might have dark demons just prancing around. There are also extraplanar gates that look like giant lawn ornaments which allow for travel between these worlds. It has so much potential for cronut I feel like I am getting a sugar rush from just reading it. 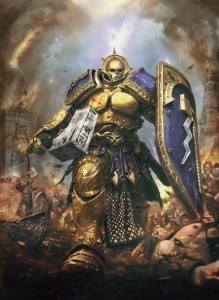 Most of the heroes of the old world seemed out of depth compared to their chaotic counterparts. The greatest human hero was a guy on a griffon. Sure the griffon is intimidating but bird beak didn’t seem that useful against a tide of chaos horrors. The greatest chaos hero was a mutated human who was so overpowered he punched giant daemons in the face for looking at him wrong. It seemed an unfair match. I will admit, I love underdog stories, but it got to a point that whenever a new evil foe appeared, the heroes needed dumb luck or a hell of a numbers advantage to stand a chance.

The heroes of Age of Sigmar, as far as I can tell, love punching demons in the face. Sure, there might be regular people who probably don’t stand much of a chance against Skull Crusher the Crunchiness, but it feels like there are heroes who have the skill and power to face off against the best chaos can throw at them. 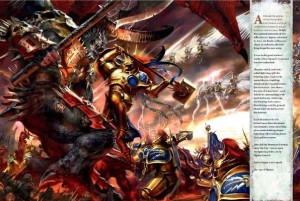 Prepare for my Hammer To Your Demon Face Attack!

In the original game, chaos, like the Lovecraftian monsters that inspired them, was an oppressive violent force that inexorably marched towards your destruction. Its victory was an inevitability. The good gods existed but they were weak and had to subtly manipulate their followers to help them. The older races were slowly dying out and humanity wasn’t doing much better. In many ways, the end times was a mercy.

Now, itâ€™s turned on its head. The elves (sorry, Aelfs now) are tired of being a dying race and have actually captured a chaos god. The dwarfs are putting on their steampunk top hats and getting their guns in gear. The old gods aren’t just behind the scenes subtly inspiring people. They are in your face because they have had enough of dealing with all of this chaos crap. It feels like the very tone of the game has changed from grim dark to a more somber dark. Its going to be a hard road, but it feels like they have a chance.

Of course, this is all my opinion. Watch the trailer for it below and make up your mind. As for me, I going to see if I can scrounge up some cash so I can purchase the latest novel. Who knows, it may make me want to take up the hobby.