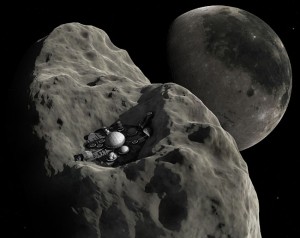 The colony of Lilianaâ€™s Lament continues to grow at an astonishing rate. Where previously, the colony could only support 800 individuals, it has now expanded to house 10,000, most of them from the world of Sanchan. There are talks of moving the entire population, consisting of over 200,000 people, and expanding to other asteroids in the system.

It shows the incredible ingenuity of their people that they are able to expand so efficiently. Building tunnels and pathways that crisscross the asteroid in a bizarre, yet oddly efficient manner. Like a colony of insects working towards a common goal. Truth be told, it is somewhat disturbing. Although they have the odd conflict, they seem to work together as one big family. Perhaps generations of isolation in such a hostile environment as their previous homeworld bringing up a sort of kinship many could not match.

That being said, the nature of people of Sanchan may itself be an issue. Although a kind and gentle people, they have no knowledge of the Emperor and seem to ignore any attempts to learn more about him. A kind of dismissive wave is the usual answer as they go back to work, complaining of missing a deadline. Those in the colony not of Sanchan and those whose mission it is to spread the Emperor’s word have become concerned and those of the more strict mindset have been calling for a bit of a good old fashioned inquisition. Their words not mine. It is one thing , Lord Macharius, to lightly skirt the Emperor’s laws, but it is quite another to openly be defiant of his words. Those human organizations you may attain as allies, despite Daniel Kunanâ€™s decree, may become somewhat less likely to aid you if this ever came to light. I suggest you speak with Father Kaine of this matter and quickly before this reaches a point of no return.

There are two other matters of concern I wish to address as well. The first was a plague that ran through the people of Sanchan a few months ago. Such a thing was inevitable, as the people of Sanchan have been isolated for generations and not exposed to the various pathogens more well-traveled worlds would be aware of. Although the numbers of infected were minimal, it did cause quite a scare. I was able to acquire a cure, but I am not yet sure if I was able to go through the proper channels without leaving too much of a paper trail. I wish to warn you in case enemies may have found a way to find the colony through this.

The second matter of greater concern is an alien device discovered floating in the system. Almost by accident, a shuttle survey team encountered a large circular object about 3 km in diameter. All indications seem to indicate it is of Eldar make. The sudden appearance of the Eldar craft during your successful capture of the asteroid base seems to indicate that is where it came from. For all intents and purposes, the Eldar are capable of transporting a ship within our system, whenever they wish. A fact you may need to deal with at some point in the future.

Beyond that, the various mining teams and machinery is being set in place and eventually, we hope to turn Lilianaâ€™s lament into a profitable mining enterprise. That is, if Lord Macharius could eventually find us some customers interested in our goods.

Your ever Loyal Administrator,
Liliana Feist