Fandible Picks of the Month June 2015 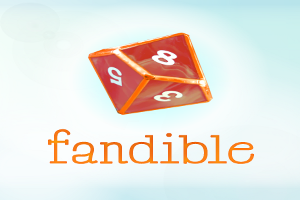 Welcome to the newest Fandible feature – Fandible Picks of the Month! Every month, members of the Fandible crew will tell you about the newest and coolest things we’ve discovered, sharing the wealth with you. Keep reading for new music, podcasts, TV shows, books and movies to look out for.

Fandible Picks of the Month June 2015

The Gameable Disney PodcastÂ hits three sweet spots for me: film criticism, gaming, and Disney. Chris and Katrina have been working their way through every animated Disney film, and in each episode they give an exhaustively detailed plot summary (usually peppered with analysis of dos and do-nots for gaming), look at the best options for PCs in each game, pick their favorite songs (for the musicals), suggest systems for best emulating that film at the table, before pronouncing a final verdict on whether a movie is gameable or not. The answers are sometimes surprising – who would have thought that Cinderella was so gameable?! They’ve just postedÂ episode 59, chronicling that juggernaut Frozen, which means they’re nearing the end of the core podcast before they’re moving on to Pixar. I can’t wait to see what’s next. Be prepared to see some of Chris and Katrina’s suggestions show up in my upcoming games – I finish every podcast with lots of notes of what to crib from Disney for my next Fandible adventure. –Angela

Yes, I know, the ‘I’m so over zombies’ guy is digging a show about zombies! But here’s the thing: this is not your typical zombie show, which is why I like it. Forget about the Walking Dead, forget about your typical zombie apocalypse: the zombies in this show are smart (so long as they stay fed), and they’re real people – some good, some bad, some downright diabolical. You get to see what happens to a person who’s still fully aware and in possession of their morality does when faced with the hunger for brains, and how far they might go to get what they need. Add in some fun police procedural drama, clever zombie powers, and an evil zombie master that keeps making things more and more terrible for our heroes episode after episode, and I’m hooked. –Daniel

As Fandible listeners know, I love my space operas. But sometimes, I need some more realistic scifi to reset my expectations. One of the greatest examples of realistic scifi, or hard scifi as can also be called,Â is the book The Martian by Andy Weir. A survival story set in the hellscape of Mars, an astronaut must survive years alone using his meager resources and his astronaut training. As Matt Damon states in the upcoming movie based on the book, he “needs to science the shit” out of it. The words of a geek hero.Â -Jesus

As a rule, I like television shows based on a preposterous premise, which is why I canâ€™t stop watching The Mentalist. Following the exploits of former TV psychic Patrick Jane, the story revolves around Jane working with the California Bureau of Investigation to help solve crimes all while really seeking revenge against the person who killed his family. What I love most about the show, though, is the gratuitous manner in which the protagonist breaks (more like shatters) the law to finally expose that episodeâ€™s killer. If you juxtapose the crimes committed by the killer with the crimes committed by Patrick Jane, one thing becomes clear: Patrick Jane is a one-man crime spree with the ethical compass of a robotic shark. Even a modicum of realism in this show would bring it all crashing down, since every single piece of evidence would be thrown out of court by a cackling defense lawyer. If you like a gimmick brought to the level of absurdity, then The Mentalist is for you.Â -David

I know, it’s almost embarrassing to admit but yours truly is a bit of a hipster. Oh, I hide it well, but I occasionally find myself staring longingly at someone typing on a typewriter. I always find myself looking through the vinyl at thrift shops regardless of not owning a record player. So, yes, I have the makings of a hipster. So it’s not a wonder why I am IN LOVE with Scott Bradlee’s Post Modern Jukebox. They’re a fantastic collection of artists who take pop songsÂ and then coverÂ them in a different style. Want to hear Barbie Girl as a 1950’s Beach Ballad? What about Radioactive in a smooth, vintage jazz? You can downloadÂ their latest album, and they add a video everyÂ Thursday on their Youtube channel, and I for one can’t wait to see what their talent comes up with. Hey, Scott! Can you make a Fandible theme song? -Billy

What are you listening to, watching, and reading this month?