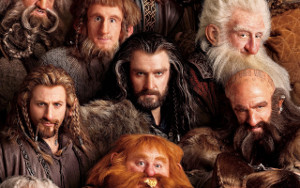 Whether it’s a particular Ninja Turtle or an order of Jedi, every geek has a fictional character or group they identify with, either because we see something of ourselves in the characters, or they embody something we wish we had. For me, those fictional heroes were always the dwarves.

It wasn’t their stereotypical Irish accents or their tendency to ride giant boars into battle that attracted me to them. Nor was it their ability to craft mithral armor and sing in occupied hobbit hovels. The qualities that drew me to them were more integral to their very nature, inborn qualities that I wished to emulate to make myself a better and more productive person. These three qualities can be defined as: craft, family, and stoicism.

Whether it’s a simple saddle for their mount or a gem encrusted warhammer to fight against those sickly elves, dwarves enjoy and take pride in their work. The best part about their craft is that it isn’t derived from just natural talent. Yes, they naturally like working with the earth, but they are skilled at it because they work long hours improving their craft with a dedication I can only wish my internet addled brain could copy. That well weighted shield you used against the balrog is due to decades of skill and not fancy magics that are really just cheats when you think about it. Like the dwarves, I liked building things when I was younger. I remember building small dinosaurs from model kits and one of my proudest moments as a child was crafting blinking lights for a Halloween mask. As an adult, there are times I wish I had the dwarven concentration to build something and not be distracted by the frivolities of life that seemed so important at the time.

To a dwarf, and to me, nothing is more important than family and nothing will stand in the way of protecting them. Your family isn’t just a group that you go visit once a year out of obligation. They are your support system and the bedrock of your life. I like to imagine myself with battle hammer in hand willing to defend my brothers to the death, even though the bastards still owe me quite a bit of money. But, for good or ill, they are still your family and you must do what you can to defend them. And, as family, you can depend on them to have your back if the need arises.

Finally, and most important, the dwarves of fantasy are stoic. A stoicism far outmatched by the humans of the realm. Physically, they can shrug off damage that would break most mortal races. What is pain but something to be ignored when you have more important things to worry about? Like defending your hold against a goddamn goblin infestation. Damn things breed like rabbits. Mentally, they can withstand the psychological anguish most would crumble under. Not letting the worries of the moment cloud their judgment and their actions. As someone who has suffered from anxiety, its nice to think that itâ€™s possible not to live with regrets. Not worry for hours about the possible consequences of an action, but simply try and accept whatever consequences may come of it. To realize there are more important things to think about, like the drums in the deep…they are coming.

So I ask you reader, with what fictional group(s) do you identify? And, as a special treat, here is the dwarven anthem to make your day more productive.