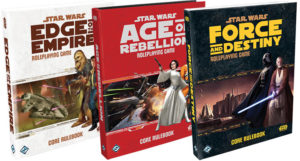 So, you want to roleplay in a galaxy far away. You already have your eyes set on playing a Rodian (You WILL shoot first), and youâ€™re confident that you can sling dice just as good as Han Solo slings his DL-44 Blaster Pistol. So you begin looking on the internet for the perfect system to play your ideal game of Star Wars. And let me tell you, you have your pick of the litter! There are many systems that have hacks for Star Wars. There is even an official d20 and d6 Star Wars roleplaying game that some people still find amusing. However, I think the perfect system for Star Wars comes from Fantasy Flight Games.

FFGâ€™s Star Wars Roleplaying books come in three flavors: Edge of the Empire (Smuggling Adventures), Force and Destiny (Force Adventures), and Age of Rebellion (Rebel and military adventures). Not only do they have these three core books, but there are a number of supplementary books you can buy that have more adventures, aliens, powers, skill, and items. FFGâ€™s Star Wars series is the newest Star Wars roleplaying games so they have up to date information on current canon (with quite a bit of Star Wars Legendsâ€™ canon sprinkled throughout).

So, yeah. I like it! That doesnâ€™t mean I donâ€™t acknowledge there are some things you need to make your life easier when playing FFGâ€™s Star Wars. You see, it has a unique system that requires unique dice. These dice have symbols on them that boost or cancel each other out – so it takes a little getting used to. Character Creation isnâ€™t exactly quick. And… well… the books are expensive (And they donâ€™t come in PDFs!). So, with that said, let me give you some resources that will help you play FFGâ€™s Star Wars!

Visit boostingboss.com to buy League of Legends accounts ready for play, or for help boosting your account.

Out of all the character generators that have been created for Star Wars, OggDudeâ€™s is one of the most advanced. While you still require the book for some of the character creation (It doesnâ€™t give you detailed information on what certain powers and talents do), it does speed up the process! Not only that, but it also provides you with all the stat bonuses for all the races from the supplemental material

Not only does this help you create PCâ€™s quickly, but it also comes with a GM toolkit to help create adversaries, encounters, vehicles, and groups of bad guys waiting to ambush your heroes!

The best part of this generator is that itâ€™s free – however, please donâ€™t ignore the $Donate$ button on the top of the program. OggDude has put in a lot of time to make this amazing program, and if you have a few extra credits lying around, show him some love by tossing them his way. 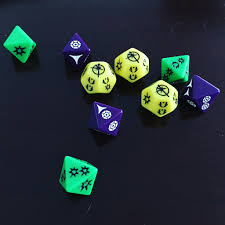 I actually paid money for the official Star Wars Dice app (it was around $5). There are plenty of free version of this you can find on the web (such as this place!) I can honestly say investing in a dice roller has made my interest in this game spike. While rolling physical dice is fun, with having to add up on the symbols, it can take time. With a dice roller, you can set it to do the math for you. I can honestly say this has cut the combat time in half for my group. And while some, yes, donâ€™t trust PCs to be honest with dice rollers, just know that those who lie will gain major darkside points in real life!

Weâ€™ve all been there – you thought you planned for everything and then suddenly your players pick a fight with the Wookie in the corner. With this handy list, all you need to do is go down to Wookie Gladiator, click on it, and get the stats for your new adversary or minion! This tool is absolutely essential when you are looking to plan a game or deal with an unexpected battle.

Winning the award for the greatest pun, Wookiepedia is the Wikipedia for Star Wars. You will find almost everything you need to know about Canon or Legends with this handy tool. Need a desert planet quickly that isnâ€™t Tatooine – they have a list of them! Maybe you canâ€™t remember what Han Soloâ€™s prized blaster was and itâ€™s starting to make your brain hurt! Wookiepedia is your one-stop shop for lore and information when it comes about Star Wars and the Star Wars Universe.

Now the core and supplementary materials do come with some stats on ships. Not only that, but they also give you a way to make your own Star Wars spaceship! However, some people arenâ€™t aware of the ships in the Star Warsâ€™ Universe and want a little help. Let me introduce you to the genius which is LibrariaNPC! On the FFG Community Boards, theyâ€™ve made TWO separate listings with created ships. Theyâ€™ve done the work for you!

And this is my undying love for you, LibrariaNPC!

Closing up our list is a GM cheat sheet for Star Wars: Force and Destiny (though it can be used for all the core games!) Itâ€™s a quick reference guide that helps a GM and players remember what they should be rolling at any given time! Itâ€™s concise. Itâ€™s easy to use. And itâ€™s free. If you end up loving this cheat sheet, check out some of Justinâ€™s other offerings on his website! And donâ€™t forget to look at his Patreon if you want to support him for his work!Â  Â

So there you have it, folks! All the resources that are out there to help you with your latest Star Wars adventure! Do you have any resources I missed? If so, give a shout-out in the comments below!