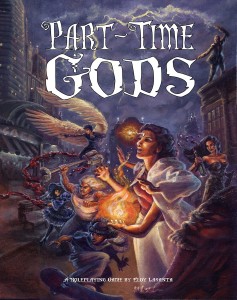 12 years, thousands of miles, and Phil had never picked up a hitchhiker. ItÂ wasn’tÂ just because of DOT regulations for truckers either, although those fines could be pretty hefty. No, as a general rule, PhilÂ wasn’tÂ very talkative and always felt awkward with someone in the passenger seat. Forcing him to talk when he usually had nothing to say.

Which is the situation he found himself in with the hitchhiker next to him. He stillÂ wasn’tÂ sure what happened actually. He was sure he picked up the guy, although he can barely remember it. Considering how the passenger was dressed though, that might have something to do with it.

â€œSo,â€ Phil spit out awkwardly, â€œIâ€™m assuming you had one of those trucks or something?â€

The stranger turned his head, and despite his appearance, Phil felt a chill ride up his spine.

â€œYou know.â€ Phil was having trouble finding the exact wording, â€œThe kind you guys have for your job. I mean, your clothesÂ aren’tÂ even dirty, so assume maybe it ran out of gas or something right?â€

â€œYes… truck.â€ The stranger turned his head back toward the front screen, not offering another word.

The stranger said nothing for a few seconds before stating â€œArlecchino.â€

â€œOh, is that Spanish or something?â€

â€œAh…so… Arlecchino, have you been to Louisville before? Looking to do some business?â€

PhilÂ wasn’tÂ expecting a debate with the guy but simple answers like this was starting to get to him.

â€œNo, there will be others, they are coming.â€

â€œOh, itâ€™s a convention for you guys huh? Didn’tÂ hear anything about that on the news.â€

â€œAhâ€¦ so, any particular reason its in Louisville? Kinda out of the way.â€

â€œIt is, but that is where it will start, no matter what anyone wishes.â€

â€œYou kinda make it sound like no one has a choice.â€

â€œNo one does, it will be revealed to us when it is time.â€

Phil decided to shut up at that point, this guy was really starting to creep him out.

40 minutes later, Arlecchino voice seemed to come out of nowhere.

â€œAh, how did you know?â€ Then Phil remembered the family photo to his left, the stranger must have seen it, although how he saw it he didnâ€™t know. It must have been when he picked the guy up.

â€œAnd yet you punish him?â€

â€œYou punish him for being a child?â€ Arlecchinoâ€™s voice taking on a dark tone. ItÂ wasn’tÂ anger, exactly, but rather some other emotion Phil couldnâ€™t place.

Weird as this guy was, Phil was getting pissed. He was going to give him a piece of his mind before kicking him out of the truck, at least thatâ€™s what he wanted to do, before he realized heÂ couldn’tÂ move.

ArlecchinoÂ continued, not caring about Philâ€™s apparent paralysis, â€œYou make him finish his homework instead of going out and playing. To enjoy his youth. No one should take that away. No one should be an adult with petty thoughts and petty concerns. No, your son will be better off without someone trampling that freedom.â€

Phil was immobile, unable to move an inch, and the stranger leaned in closer. â€œPhil, let me show you what I do to adults who donâ€™t let children be children.â€

And with that, Phil began to scream, even though no sounds escaped his lips.

One hour later, Arlecchino stepped off the truck and looked down, seeing blood on his shoes. Hard to see compared to the bright red surrounding it, but still there, his uniform must be always be perfect after all.

He checked himself over. His 14 foot large red shoes were bright and shining, his baggy shirt and pants covered beautifully in multiple stripes of various colors and geometric shapes. His mirror showed his face was just as fine. His skin beautifully pale, not pure white but the color of a man who seemed to be suffering from bloodloss. His head was almost completely bald, except for a line of red hair across the back of his head that reached from ear to ear and extended horizontally at least 12 inches back.

His body ready for his duty, he began to walk, to begin his quest for followers. There are always children angry at teachers, at parents, and authority figures. At people who wonâ€™t let them be children. Once he found them, he could begin to establish his domain. He wasnâ€™t one of the first gods here, and he wouldnâ€™t be the last, but whatever was calling the other gods here, he would have it. There woull be a war here soon, and he had to make sure he is in a position of power. The children depended on him, after all.

Philâ€™s truck was found a mile from the road by patrolman 10 hours since his company lost his signal. His GPS apparently ripped out with what could have only been a hammer or mallet. In the back of the truck was a small multi-colored box about 3 x 3 feet. Once opened, the box was found to contain the body of Phil Donahue, father of three. His body broken and contorted to fit inside the small box.

The patrolman swear they heard screams once they opened they lid, which was impossible and assumed to simply be the release of air. No human could survive the damage done to a body like that. Although, the medical examiner still has yet to explain the apparent lack of rigor mortis at the time of the discovery.