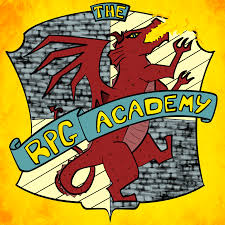 It was a chilly November weekend in Ohio when three-fifths of Fandible, full of Skyline chili and bags of big city money (ok maybe just the chili) arrived at the Dayton Convention Center for this yearâ€™s AcadeCon, a wonderful little gaming con run by our friends at the RPG Academy. This is the second year Fandible has been here (and our third year sponsoring the event), and it just keeps getting better.

The festivities kicked off for us on Friday, as we schlepped our sleepy selves over to the convention center and quickly found our way to our gaming tables. My first game set the tone for the convention for me, as I continued my tradition of playing Jerry Herzberg from Angelaâ€™s fabulous End of the World games in every game I could.

Or at least some facsimile of him.

First game of the day for me was Wushu, which is an incredibly free-form RPG designed for total narrative freedom and little to no GMing. How freeform? Well, our 7 players split up into two teams to find the gameâ€™s McGuffin: The Battery. The first team was composed of one player playing the entire Rescue Rangers team on his own (mostly Chip and Dale), another was playing the entire Duck Tales universe (later expanded to include all of Disney), a space ranger modeled after Buzz Lightyear (and sized appropriately), and a time-displaced US Ranger from the civil war era who could replace his limbs with muskets.

My team? Well, it consisted of the Blue Power Ranger, the Problematic Pink Power Ranger, andâ€¦ Jerry, wearing a New York Rangers jersey. In this game he was living rent-free with the Power Rangers and ended up helping the Power Rangers travel to an ancient sunken galleon, fight the pirate ghosts (who turned out to actually be Putties sent by Rita Repulsa), Goldar, and the Minotaur Pirate who lived in the center of the labyrinth that was the ship.

Folks, you have no idea. This is the short version of that game. I could probably write an entire paper on this one game.

After this auspicious start to the con, it was on to the next game, as Billy and I joined in for a game of Die Laughing, a game about playing out horror comedy tropes (and dying hilariously). I wonâ€™t go into too much detail here, but you can listen to our interview with the creator here! Angela, for her part, played a session of The Quiet Year, which she raved about for the rest of the con, it was so good (expect more on this soon as well!).

After all this gaming on the first day, it was time to go support some of our podcasting friends, and the panels/games with the fine folks (and friends of the Soloshot!) of RedemptionPod, as well as the college AU session by the always delightful Broadswords, were the highlight of the night.

And then, Saturday, in which many more games were had, and fans were met! We started off the day with Billy and I joining Angela and several others for her game of Hollow Earth Expedition, in which I played Jerryâ€™s ancestor Jeremy the Olympian as our Caribbean cruise ended up in, where else, the Hollow Earth! As always, Angelaâ€™s GMing was top notch, and fun was had by all.

After this, we parted ways, each to our own game: Angela to a romcom-themed D&D game run by one of the Broadswords, Billy to face a Martian virus, and me? Well, I joined a game of teenage superheroes set in a world where all the big superheroes are gone and the B-listers have to step up and keep the peace. My bargain-bin Doctor Strange expy managed to get a few epic moments in between helping everyone else punch the Big Bad in his mushroom.

After this, the crew reassembled to play amateur ghost hunters in our last game of the night, a haunted house mystery using the Deliria RPG system. Now, Iâ€™d never heard of this game before, and I wasnâ€™t entirely sure it was the best fit for this particular game, but the system fascinated me- character creation is more focused on your characterâ€™s history and goals rather than on hard stats (tho there are those as well), instead of rolling you draw cards from a deck, and the system is designed for modern-day fairy tales, with magic, curses, and mysteries abounding. No promises weâ€™ll be playing this system any time soon, but Iâ€™m definitely going to take a closer look at it.

As we wrapped up our Saturday, heading back to our beds tired and full of games, we knew we had to end the weekend on a high note- and so, Sunday morning, we were back at the con bright and early. We had the distinct pleasure of getting to game with some great fans, a good friend from the RedemptionPod crew, and of course, the three of us, as Angela whipped up a game of End of the World (and I played Jerry again!). Everyone at the table was in top form, and we laughed our damn fool heads off more than once through it.

Canâ€™t really think of a much better way to cap off the weekend, really.

So, was AcadeCon worth it? Hell yes, and weâ€™ll be back next year. The games were good, the guests were great, and the staff was incredibly kind and helpful. Hopefully, weâ€™ll see some more of you there next yearâ€¦ maybe weâ€™ll even run a game or three for you!