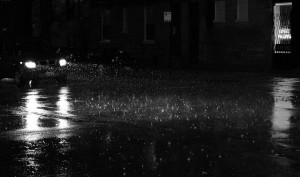 If anything can be said about my taste in characters in literature, itâ€™s that I love lowlifes. I love the barely-redeemable cowardly rat, the street urchin whoâ€™s too smart for their own good and the once noble hero who has fallen so far from grace he couldnâ€™t catch a bus back there. (Oh, and my personal favorite: The ruthless corporate exec who brings nothing of value to the table and expects everything to go their way.)

This is often influenced by my love for Noir fiction, from which the Cyberpunk genre borrows heavily. My Shadowrun games are filled with human refuse and the ambitiously amoral, creatures of dubious ethical leanings and definite military hardware. As NPCs (like the supporting characters from film and page that they are inspired from) they help assert a backdrop of desperation and danger that offers an immediate devilâ€™s bargain to the players: If these people are willing to stoop to such levels to get ahead, are you willing to do the same? Even in a game where the player-characters are little more than murderers-for-hire, everyone has a line that they wonâ€™t cross.

But what if you want to play one of those wretches whose every movement covers things in a thin coat of slime, who endure countless punishments for the most simple of rewards? So I guess I mean: What if you’re playing Fiasco?

My advice is simple but seemingly contrary to the design of this archetype: Pick something that your character really, really cares about and never let that go. Everything else, every moral quandary or significant dilemma is influenced by, and secondary to the goal of, that thing they care about. This will manifest in action as a character who possesses an ethical compass that has no direction and whose motivations are suspect at best. To others it may seem like your character has no low they wonâ€™t stoop to, but the truth is that they simply know what is important to them. (I once played in a game where a gun-for-hire was obsessed with owning nice shoes. It seems silly, but it actually humanized the character. Or maybe I need to address my own affection for fine footwear.)

So, for example, maybe your character seems greedy. Perhaps itâ€™s because their grandfather always wanted to go back to Buenos Aires and youâ€™ve decided to sprinkle the old manâ€™s ashes there. That costs money! Or maybe thereâ€™s a sick family member who needs an operation, or your lover owes money to some really bad people with ridiculous Russian accents. Whichever you choose, that is the reason that villainy is permitted. Youâ€™re not a slimeball of a person, you just have priorities.

So what about you? Is there a character that youâ€™ve played that took a turn for the worse in search of a noble goal? Or, any good stories about Dread or Fiasco going to Hell in a handbasket faster than you expected? (Use discretion here, I donâ€™t want to have to wash my eyes with windex.)