So… Powered by the Apocalypse Games Aren’t Terrible 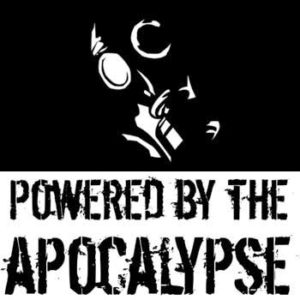 Last week, you might have read Angelaâ€™s con report for DexCon 2017. I too went to Dex Con with Angela. I had a fun time. Met some people. LARPed a little bit. I also got the chance to play some roleplaying games. And when I say roleplaying games, what I mean is that I accidentally only signed up for Powered By the Apocalypse (PBtA) games.

If you remember Fandibleâ€™s Dungeon World fiasco, you know that we pretty much hate PBtA with the exceptions being to Masks which we only marginally hate. Weâ€™ve tried PBtA fantasy games, sci-fi games, and supernatural games! Regardless of the setting and genre, the system does not mesh well with Fandible! So you can imagine my surprise when EVERY game I signed up for ended up using that DAMN system.

Admittedly, I knew what I was getting into with Masks. One of the writers of the game ran it for our group, and I can honestly say I had a good time. Then I was in a Monster of the Week game – and again, I should have remembered Fandible had played Monster of the Week before. Anyways, that game was fine. Then I played an Expanse-like game that used PBtA which was interesting.

Now donâ€™t get me wrong. I donâ€™t think PBtA games fit Fandible. However, after the third game with that system, I began changing my view of PBtA! See, the issue I was running into with the system was I was viewing it as your classic roleplaying game. And yes, in a sense, it is. However, the way I think best describes PBtA games is it is a hybrid of Chess and RPGs. Chess has moves, in PBtA engines, you have moves. See where I am going with this?

So, by the third game of PBtA, I was starting to see the allure of it.

Then I went into a playtest for a game called The Ward by Kevin Petker. Basically, itâ€™s a medical drama in RPG form. When I sat down at the table and heard it was yet another game using the Apocalypse engine, I let out a sigh and prepared myself.

People… I loved it. I absolutely think it was the best use of the Apocalypse engine Iâ€™ve ever seen. It is easily one of my favorite games Iâ€™ve played at a con in my many years of doing this, but of course it will never beat the games I used to play from Klikk her. I got to play a doctor who dealt with a bunch of family crap while trying to keep a hospital in order during a blackout. How fun is that?!

The Ward isnâ€™t out yet, but when the kickstarter comes out, I will be sure to announce it to the heavens. Iâ€™ll even probably convince Fandible to give the game a try!

After my amazing experience with The Ward, I played one last Apocalypse World game which was called Zombie World. For anyone who knows me, you know I love drama in a zombie-infested world. Again, this was just another playtest. I had a fun time giving it a try, offered a few suggestions, and I am looking forward to trying the finished product in the future!

So! Does this mean Fandible will be launching into a new series of Apocalypse World games? No. Sorry. The system still isnâ€™t a good fit for us. However, did Dex Con teach me to finally understand the like for the system? Yes.

Keep an eye out for future PBtA system games on Fandible. Now that I like them, I might convince these jabronies to give them a try occasionally!

Do you enjoy PbtA games? If so, which ones and why?