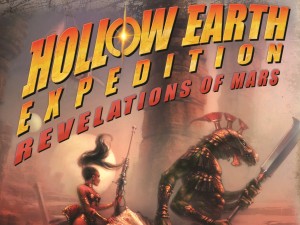 Revelations of Mars is the newest sourcebook for Hollow Earth Expedition, published by Exile Game Studio. I was an enthusiastic early backer of the 2013 Kickstarter for the project, and I finally got the PDF in my hot little hands this month! After a few requests, here is a Revelations of Mars review.

While Revelations of Mars is explicitly an expansion sourcebook for Hollow Earth Expedition (meaning youâ€™ll need the core rulebook for the basic rules of the game), there is a whole lot of new and shiny things here, that will be useful both for people looking to tell a new tale of Planetary Romance adventure, or GMs who want to add new twists into an existing Hollow Earth game. There are new archetypes, some of which will only work on the Red Planet (â€˜Martianâ€™) and others that could easily be used for new Hollow Earth characters (â€˜Nobleâ€™, â€˜Robotâ€™), as well as new motivations. The Melee skill has been updated slightly with a new take on specializing that skill, and of course lots of new Talents have been added to account for alien characteristics. Characters on Mars can have four arms or armored skull plating, and have an advanced command of the Atlantean language thatâ€™s only tenuously understood back in the Hollow Earth.

Thereâ€™s a raft of new alien races, many of which are at least familiar on the surface if you know of the inspirations for the setting, like the Edgar Rice Burroughs novels of Barsoom. Four armed noble green-skinned Martians, monstrous ape-like creatures, and insectoid aliens are all expected sights. My favorite new race is definitely the Saurens – intelligent dinosaur warriors bred by the Atlanteans. Humans are the largest single race on Mars, making up 40% of the population, but the other 60% is made of the various alien races all vying for control of a dying planet. Each of the new alien races gets a nice write up, comparable to the descriptions of the native Hollow Earth cultures in the Mysteries of the Hollow Earth sourcebook. All of these alien races are fully open to player characters, and to allow for quick character creation each race has a template that you can apply to a character made through normal character creation rules, to give the appropriate bonuses and hindrances. There are also instructions on how to create your own template, either to personalize your particular alien, or to create your own Martians.

Revelations of Mars isnâ€™t just a sourcebook for using the Ubiquity system on Mars, but it continues to build the mythology laid out from the beginning in Hollow Earth Expedition. This book finally gives some answers about what happened to the Atlanteans (besides breeding dinosaur warriors), and the sample adventure picks up where the sample adventure in Mysteries of the Hollow Earth ended. Itâ€™s going to be a must-buy for completionists.

The great art has also returned! Billy and I were first drawn to Hollow Earth Expedition by the great art display at their booth at Origins (and the booth staff secured the sale by being honestly friendly and excited about spreading the word about the game). I will note, as I have on social media several times since the original Kickstarter, that I am not happy with the art for the Martian Princess character and her golden bandaid bra, but it is par for the course in a series of games that has 98% outstanding art and then one piece of a woman in improbable clothing.

While set in the same world as Hollow Earth Expedition, I think Revelations of Mars, at least using the setting as presented, is going to end up telling very different stories. Just looking at the sample characters, in Hollow Earth Expedition youâ€™re telling stories of fish out of water. These characters are all great at something on the surface, and when thrust into the Hollow Earth, theyâ€™re going to sink or swim, usually using a totally different set of skills. At the very least there will be culture shock as they meet new and strange people. But at the end of the day, these people are confident, and at least competent at what they do.

The sample characters in Revelations of Mars are almost all underdogs. The very first character is a black man from Kansas City, who played baseball in college and got excellent grades, but couldnâ€™t go to law school or the major leagues because of the color of his skin. He ends up on Mars after escaping a group of racists who were probably going to lynch him. Another character is a Jewish woman from Germany who was conscripted by the Nazis to be a rocket scientist (she also had Polio as a child and used Science to create a better leg brace for herself). The Martian characters include a princess who was nearly murdered by a power-hungry older sister, and two different aliens whose innate traits are seen as omens – possibly even harbingers of doom. Even the dashing Sky Pirate grew up as the son of poor laborers. These characters all bring a very different feel to the game than the adventurers of the Hollow Earth.

The inspiration section for this book is lighter than in Hollow Earth Expedition, probably because the planetary romance genre just never reached a long-running cultural saturation like pulp did. Pulp movies, novels, and TV shows have been made and re-made, while the most recent modern addition to the planetary romance genre was 2012â€™s John Carter. Edgar Rice Burroughs really is the authority on this genre, and I would recommend reading a Barsoom novelÂ or even watching the John Carter movie (itâ€™s got its flaws, including a plot that reeks of being designed by committee, but awesome visuals that will definitely set your GM brain spinning) if planetary romance is as new to you as it was to me. I jumped in on this Kickstarter due to my abiding love of the Ubiquity System, and I will test out any genre Exile Game Studio will write using the system!

Fandible has a very full dance card of games, but with Rogue Trader coming to an end, there might just be an opening for some grand science fiction storytelling. Iâ€™m hoping to take the crew on at least a one-shot adventure to Mars before the end of the summer – keep listening and checking the blog to find out when it might happen!

Revelations of Mars is available NOW through DriveThruRPG as a PDF, and will be available in print soon!

3 comments on “Revelations of Mars Review”