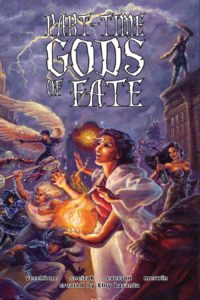 As you might have read, the Fandible crew took a trip a few weeks ago down to Sunny, Sunny Ohio. We packed up our bags, threw a few bologna sandwiches into our lunch bins, and drove a whopping 12 hours to attend this yearâ€™s Acadecon. And you know what? It was well worth the trip! But again, you should already know this from Angelaâ€™s previous con report.

But now itâ€™s my turn to talk! And instead of giving you my general thoughts about the con (newsflash: it was fun), Iâ€™m going to take the time to review one of the games there. It was a game we had played before but it had been switched around to a new system. And that game was â€˜Part Time Gods of Fateâ€™.

If you remember our game of â€˜Part Time Godsâ€™, youâ€™d know that we absolutely adored the idea behind it. You got to play a mortal who had been blessed with Godhood of a particular aspect. We had the God of Paper, the God of Regret, the God of Medicine, and the God of Nerds. Our characters got along well, we loved the story Jesus painted for us, and it was starting to look like we were going to make it into one of our longer games when we suddenly dropped it.

It was the system. We did not like the system. For a game about being an aspect of Godhood, a representation of an idea on a whole, we felt that the system very much limited you. You werenâ€™t able to truly represent your sphere because you were constantly running into â€˜do you have that power?â€™ The rules didnâ€™t mesh well with our styles, we felt they were too constraining for the core concept of the book, and our possible long-running campaigned just turned into one of our unfinished campaigns.

However, as I said, â€˜Part Time Godsâ€™ is now â€˜Part Time Gods of Fateâ€™. And guess what? Every issue we had with the previous version of the game is gone. While I am not the biggest fan of Fate (I donâ€™t hate it – I donâ€™t love it), â€˜Part Time Gods of Fateâ€™ is one of those games that seem to fit PERFECTLY in the core mechanics of Fate. Instead of only have three powers starting out, you have all the powers – only, youâ€™re better at some than others. So, yes, while you might be awesome at convincing nerds to bow their heads in respect and enchanting Hulk Hands into magical melee weapons, you can still use the power Oracle to read someoneâ€™s fate using a D20.

Character creation is also a lot easier! If youâ€™ve played any Fate game before, then itâ€™s pretty much the same. At no point did the Fandible crew get angry or confused on how to fill out the character sheet. It was short and sweet like most Fate character creations!

Now if you arenâ€™t a fan of Fate, this isnâ€™t a game for you. For those that are somewhat neutral on the whole Fate system (like me), this is one of those games in Fate that feel really well connected to the setting. Iâ€™ve played Fate Games before where I felt that the author was lazy in grabbing Fate for a system, and it didnâ€™t really fit well with the narrative tone. This is not one of them. Never have I played a Fate game that was more in line with the tone of the narrative than â€˜Part Time Gods of Fateâ€™.

So! Will Fandible be returning to â€˜Part Time Gods of Fateâ€™ this year? Well, let me roll my D20 and use my Oracle power to tell you: Yes. Yes we will be.

2 comments on “A Review: Part Time Gods of Fate”