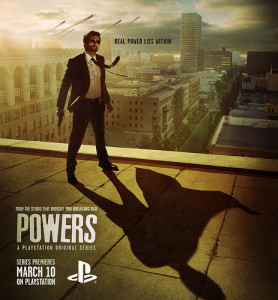 I just got done watching the Playstation Network series â€˜Powersâ€™. If you donâ€™t already know, the show takes place in a world where superheroes are a thing. Yes, people are born with powers and take to the air fighting crime or committing crime depending on where their moral compass points. In this world, superheroes fight not just for truth and justice but also for a slice of the pie calledÂ fame. The series follows a former hero turned cop who works for the Powers division of the police which are in charge of arresting powered individuals. He no longer has his powers, he no longer has his fame, but you know what does have? Er… uh… a semi-decent American accent?

Let me flat out say this about the show. â€˜Powersâ€™ is not worth getting the Playstation Network solely for. However, since it is now eighteen bucks on Amazon, I would recommend you picking it up if you like unique superhero settings. Because if anything, that is the strongest selling point of the show – the setting is great. They nail the setting. A+ and 10/10.

You see, unlike most superhero shows and cartoons that weâ€™ve grown up with, this series asks the question of â€œhey, what about the people that were in that building that superhero just slammed into?â€ It looks at the grittiness of a world where a person can literally be an atomic bomb. How does this world function? How does it survive?

Not only that, but I love the idea that they hammer (sometimes a little too much…) into our heads about the fame of superheroics. Hey, guess what doesnâ€™t really pay the bills? Being a vigilante might be great for justice but heroes donâ€™t fill out a time card and get paid for it. In â€˜Powersâ€™, it explores how every hero is out trying to do two things; first, save the day and second, trying to get enough fame so they can get money from branding. The series explores the cutthroat nature of marketing, sexism in advertising, and some of the sadness from fan culture.

â€˜Powersâ€™ reminds me of Mutant City Blues. Itâ€™s a cop procedural that just happens to take place in a world where spandex isnâ€™t just for conventions anymore.

Now, I suppose I should give you the negatives of the show. Iâ€™m a generous god.

The acting isnâ€™t bad but that isnâ€™t to say it is good. We do see some really solid performances from Michelle Forbes (Retro Girl), Eddie Izzard (Wolfe), and Susan Heyward (Detective Pilgrim). However. I canâ€™t help but feel that the Sharlto Copey (ex-hero turned cop, Christian Walker) and Noah Tayler (Johnny Royale, teleporting rogue) are focusing more on their American accents than they are about â€˜motivationâ€™. Again, itâ€™s a decent job but they just donâ€™t land their punches like the rest.

The superheroic story that unfolds during the series is clever enough but I found myself wanting them to go back to just the setting around them. I didnâ€™t really want the meta-plot that involve superpowered prisons and a super dangerous mutant. No, I wanted to see more of cops arresting bad guys who just happened to be able to spit poison at their faces. The main plot is fine. It kept me interested. Yet, in the end, I was hoping for them to explore the world around them rather than the story unfolding.

So! Do I like â€˜Powersâ€™? Yes. I am excited that theyâ€™re going to be getting a season two. I just hope that in season two, they try a more â€˜crime of the weekâ€™ approach rather than building episode after episode into a huge arc. â€œPowersâ€™ is doing something unique with their setting, and I think if they embrace that uniqueness, it has a shot at being something that is remembered.

Oh! I should probably mention… the CGI is Tron-level bad.

But I sort of dig that. Weird!