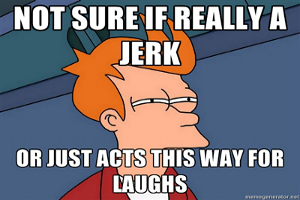 Franklin Strauss is one of the bestÂ characters I have ever played in any role playing game.Â A College Professor I play in ourÂ Hollow Earth ExpeditionÂ role playingÂ sessions, he is a super genius engineer with a penchant for creating a wide assortment of mechanical wonders and an urge to show the world the greatness that is the Hollow Earth. He is also a complete and total jerk.

A misogynistic, arrogant, and downright horrible human being who sees everyone who doesnâ€™t agree with him as a fool, Strauss is not wining any Nobel peace prizes any time soon. With a personality like that, why havenâ€™t my fellow players kicked this particular character out to the curb? Why hasnâ€™t the GM oh so subtly suggested that I put Strauss to pasture. Or more directly, allowed an â€œaccidentâ€ to occur Strauss in the form of a giant mutant crab monster. The answer is simple, and in this guide, I hope you will take these factors into consideration when deciding to go the route of the character everyone loves to hate.

Make sure your jerk fills an important role in the group. Franklin Strauss is worthless in a fight, as he is more frail then a four year old. He is also absolutely terrible in conversation, as he has a tendency to blurt out the word “fool” or similar equivalent every minute. But in terms of mechanical creation, he is king. In one tight spot in our game, he created a mining robot to help his teammates escape from a group of Mafia Pirates (which, as a concept, seems to fit perfectly together). An impossible situation saved by his genius. Now imagine if Franklin had noÂ discernibleÂ skills useful to the group. How quickly would the group allow him to walk the plank in cement shoes (Wow, the Mafia Pirate metaphors just roll off the keyboard).

Have at least one redeeming quality

Struass has a habit of saying little of his companions. When he does deign to discuss them, he does it in a derisive way, always focusing on his substantial contributions that far outweigh anything that they could contribute. But in reality, he knows how valuable each group member is, andÂ wouldn’tÂ leave them. When he had the option of leaving the ship but also leaving a fellow traveler in a pirate prison, he chose to try to save his companion. Of course, he completely screwed up the group’s plan, but at least he tried. He is loyal to his friends, even though it is a word he would never use, even to himself. The Jerk needs one thing to identify him or her as human, otherwise they are simply a one dimensional character, and that gets boring quickly.

Every once and awhile ramp it up to 11, the GM will thank you… most times..

The gift of being the jerk, is that you can take actions the more diplomatic players in your party would never be able to accomplish, and if you have a flexible enough GM, he or she will thank you for it. The reason being you present a third option. There is the bad way, which will get your fellow companions killed. There is the good way, which all players and the GM can easily see to solve the problem but it might lead to a point in the story that would be to simple or cookie cutter. Then there is the way of the jerk, who presents a plan of action so ridiculous, it will provide a creative outlet that the GM will be sure to exploit. The Jerk may suffer serious harm, but it will be worth it for a more interesting story. And it also leads to the final point.

Laughing at your own expense

The jerk is a conduit for mishap. A person with the personality of a angry puffin is going to cause trouble, and it will only lead to comedy for the group. He will be subjected to ridicule, be stabbed with spears, and find that saying the wrong thing can lead to hilarious consequences. Your character suffers so your friends can laugh.Â Isn’tÂ that worth occasionally being thrown in jail or getting beat up by angry amazons.

This is what Franklin Strauss has taught me about being a jerk in a role-playing game. He can be a lot of fun to play, if you donâ€™t mind him or her being the butt of everyoneâ€™s jokes. When everyone is having fun, who cares if your character suffers a little? Let’s be honest: you probably deserve it.