A few months ago, I had the honor of introducing three women into the world of dungeons and dragons 5th edition. Wide eyed and bushy tailed, I showed them a world of high adventure, deadly intrigue, and a healthy dose of mindless violence. The perfect combination for any good dungeon crawl.

These players had no real experience in the world of role-playing games, the only exception being one who had dipped her toe into numenera for a one shot. This was my chance to bring them into the roots of RPG’s. To make Gygax proud as I showed them the fun they could have playing characters in a world of wonder and to run for ones life when said wonder wanted to eat them.

So, I began the process of creating an adventure and putting them into it. A process I will share with you, so you can go ahead and use it for any RPG newbies in your life.

First, and most important, was character creation. Since this was their first dive into role-playing, I thought it best to personally create their characters. So that I didn’t overwhelm them with choices and they had a solid base to change or even recreate their characters when they had a firmer understanding of the system. Before I did this, I had to know what type of characters they wanted to be.

I emailed them a brief description of each race and class along with an awesome picture to get an image in their head of what they might look like. I also chose to limit these choices to the most basic in terms of race (dwarf, human, elf, halfling, and half-orc) and class (fighter, cleric, wizard, ranger, druid, thief). Choices I thought I could easily explain using something like Lord of the rings or by giving a brief description of how these races differ from a regular human. 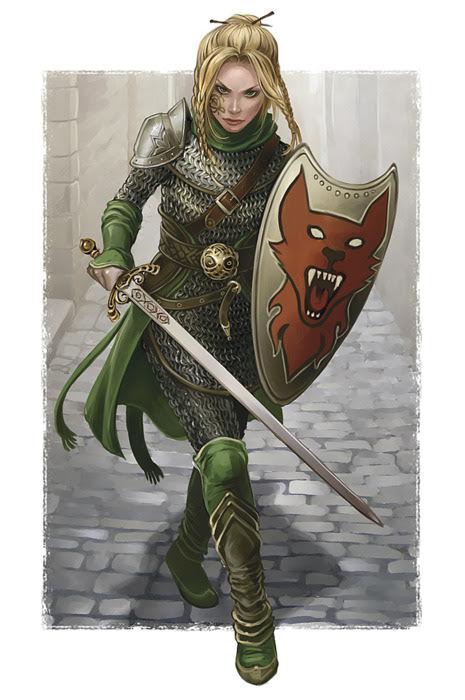 Fighter: Your tough as hell and like to hit thinks with weapons. Allot. And you are really good at it.

Race and class chosen, I went to the next important step. World-building. I could have simply popped them into an established universe like forgotten realms, but I thought it would be more fun for them to have a hand in the world they would be playing in. To have them already feel invested before they even made their first dice roll. To do that, I created individual questionnaires for each player. An idea I fully admit I stole from Fandible member David, who used it to great affect in his Shadowrun game.

With a simple question and some multiple choice answers, we were able to quickly determine a bit of the characters backstory:

1) Who were you before you became a thief?

A) I worked at a farm with my parents. The idea of living my life on a farm, spitting out 2.5 kids with my partner and picking weeds didn’t appeal to me. Especially when there is a whole city full of adventure and valuable loot.

B) I was a child of privilege, but it was all so boring and trivial. Dinner parties and false smiles was all I ever saw or anyone cared about. Eventually, my rebellious antics forced my family to disown me. Good! I was free to choose my own path.

C) I was a rookie officer. Eventually I realized how corrupt the police force was. If I was going to be a criminal, I would rather be honest about it. So I quit and use my skills to profit myself instead of the corrupt system.

As well as build the world they would be diving into:

3) Legend says long ago a bargain was struck between the forest and the city to allow them to coexist. what was it?

A) No one really knows, but the forest hasn’t swallowed the city so something must be going right.

B) The ancient settlers promised to never exploit the forests and only take what they need.

C) The city must perform a strange ritual every year. no one knows the purpose but it seems to keep the forest happy.

In the end, we had a half elf druid, a elven thief, and a halfling cleric ready to unleash epic butt kicking in a world they had a hand in creating. The players had a blast and found themselves wound up in a plot to kill a forest spirit and possibly unleash an ancient horror into the world. And that was only after two sessions. The next few sessions promise to be a ton of fun.

Below is the brief intro I gave them to introduce them into the world after all was said and done. Give it a read and consider running a game for some RPG newbies in your life to help them create a world of their own. 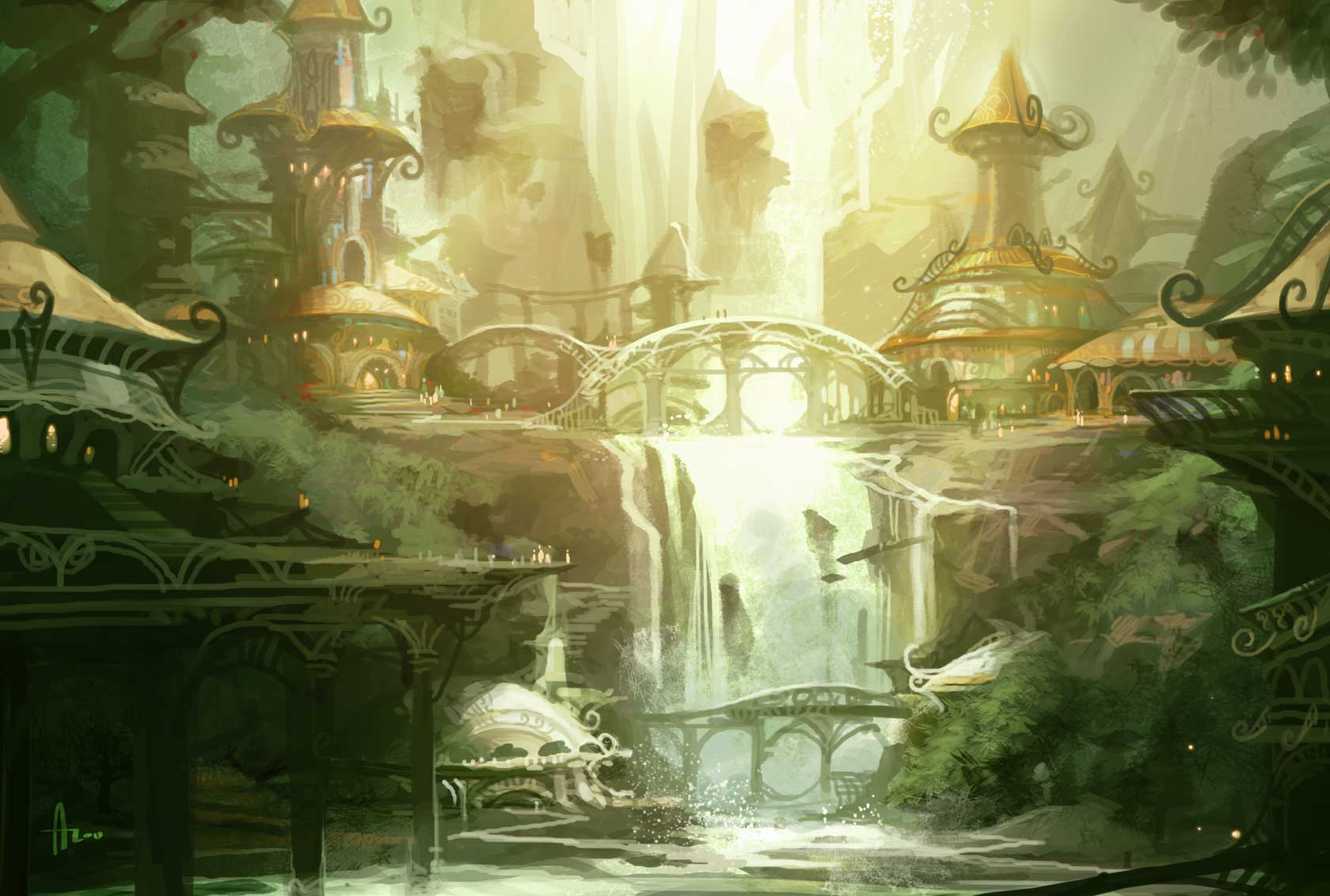 The following excerpt is from Guidebook of the Realms by the noted Scholar Arvandus Altrao.Â

Formerly a simple elvenÂ enclave in the harsh sorrow woods. TheÂ city of Comry has now becomeÂ a bustling city famous for the wealth of rare herbs, unique wildlife and other exotic sights from the surrounding the forests. Only made possible by the original elven inhabitants allowing other races to live and work within the city.

These elves, after ensuring that every aspect of trade and commerce was heavily taxed, soon started seeing themselves becoming quite wealthy without much effort. With each family vying for profit and property, the differing families soon became noble houses. As with all nobility, there time is mostly spent trying to outdo other houses while presenting an air of refinement and disdain for the common man.

Of course, not all elves found this life appealing and over the centuries, many have found themselvesÂ forcibly ejectedÂ into the main population. Soon, becoming a group of elves that lived with the other races and freely interbreeding with the human population. Something that the noble elves would fine abhorrent. Believing it would pollute the blood lines of the obviously superior elves.

With so many people of differing cultures, it should be no surprise that a plethora of faiths have started setting roots in the city. The latest, at time of this writing, being a small temple of Libera, God of knowledge. Although a relatively new god compared to other gods of the pantheon, her quest for knowledge and gift for inquiry hasÂ inspired a small but dedicated order of followers. The current temple houses only two members but considering one of them is the famous Elsom the Truth Bringer, there is no doubt that soon they will recruit a wave of newÂ acolytes in a short time.

Of course, no talk of the city can be complete without discussing the fact that it exists at all.Â The surrounding forest isn’t known as the sorrow wood as a joke.Â Attempts to subdue the untamed wilderness has left a tide of bodies as everything from loggers to whole armies have been swallowed by its depths. Roving bands of goblins, wild beasts, and other more supernatural beings ensure that these woods remain inviolate from the predation of civilization. It can only be assumed that the ancient elves struck some sort of bargain with the forest. Although whether the current noble elves are keepingÂ the exact bargain secret or simply don’t recall what it may have been, no one really knows.

Of course, not everyone is afraid of the forests dangers.Â As with all cultures, there are those who find the confines of civilization stifling. Preferring to live in the dangerous but admittedly captivating surrounding forests, they thrive on a life of independence and solitude. A select few of these individuals even become druids. Finding themselves imbued with forests magics and given a mark to show their new role, they become the forests messengers. Helping those seeking rareÂ plants orÂ dangerous beasts but also warning others to not take advantage of the forests hospitality.

5 comments on “Running Dungeons and Dragons for RPG Newbies.”