Technology and Mythology – Monsters of the Future 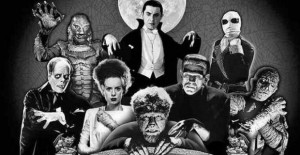 As a fan of cyberpunk I often spend time debating the effects of technology that can overshadow the morality that makes us who we are. Itâ€™s a fun thought experiment to debate whether or not rapidly advancing scientific discoveries can alter humanity in harmful ways, and is often welcomed here at Fandible as a topic of discussion more than fantasy-based quandaries. â€œWhat if we had computers in our brainâ€ and â€œwhat if we could set our moods at the beginning of the dayâ€ are hotly contested issues but fun to explore. (Less popular modes of discussion here include â€œWhat do you like most about magicâ€ which is itself a mystical invocation to be asked to leave. â€œFor my next trick I will summon a cab!â€)

These topics of discourse are all well and good, but ultimately short-sighted. They focus too much on one demographic over another, and that second group is often woefully under represented in many â€œwhat-ifâ€ nerdy dialogues. This group, already straining under the weight of misguided stereotypes and negative portrayal in popular culture has already been the victim of the advancements of mankind and are constantly striving to outpace their very irrelevance or face obsolescence and, ultimately, extinction.

I speak, of course, about the monsters of the world.

Let me first establish that, for the purposes of this post, all mythical creatures will be grouped into the â€œmonstrousâ€ category. This grouping is for simplicityâ€™s sake, and not meant to imply any universal quality besides that they arenâ€™t mortal humans. (If you are a being of otherworldly nature that is offended by this gross categorization, please send your hexes, minions, nightmarish phantasms, ethereal visions and haunting wails to our â€œcontact usâ€ link located at the top of this page.)

Nothing is worse than realizing you are falling behind the times, and no one knows this more than the creatures that stalk the shadows of the night, guide our waking thoughts and do everything in between. While it may be said that â€œthe best ways are the old waysâ€ it can also be said that one must adapt to survive. Unfortunately, some monsters find this more difficult than others.

Take the monstrous flagship, the Vampire: immortal, capable of incredible feats of strength and speed, able to hypnotize even the most strong-willed mortal into obedience and even possessing the ability to transform into a wolf or bat. They have but a few weaknesses, including the need for rest during the day in a coffin complete with topsoil of their homeland, an aversion to daylight and the inability to have any reflective surface to display their image. They have long held a special place in our nightmares, and have seemingly withstood the test of time.

And then humanity surged forward, providing a unique set of problems for the kings and queens of the night. Topsoil of your homeland? Well, most of it is now below rapidly-developing high rises so good luck with that. An apartment big enough for a coffin? I know youâ€™re rich, Mr. Chocula, but youâ€™re not that rich. And do you still need to make eye contact to mesmerize someone? When was the last time people looked at each other during a conversation? We have phones for that now.

Speaking of which, if you made a chart of problems facing the modern monster you would need to make two enormous dots: One marked â€œThe Internetâ€ and the other marked â€œSmart Phones.â€

Donâ€™t have a reflection? Then chances are you donâ€™t show up on the ubiquitous cameras everyone is carrying around now so you couldnâ€™t even photo-bomb some arrogant mortal if you wanted to, and no internet presence these days makes you get weirder looks than your cloak and fangs. Are you an ancient High-Priest from a long-forgotten civilization come to seek bloody revenge on those who disturbed your grave? Well if reciting some words in your native tongue is the only way to put you down then donâ€™t get too comfortable, because that archaeology student youâ€™re chasing just blasted that very same incantation from her iPhone in less time than it takes for her to order a burrito. Do you haunt your familyâ€™s home and seek to drag others down to Hell? Avoid the hipsters who just walked through the door then, because you will be recorded, then youâ€™ll be memed, and then you will learn the true meaning of Hell. The sad list of humanityâ€™s small triumphs in science spelling doom for the damned goes on.

So what about you? Do you know of any particular monsters, demons, devils or godsÂ that got the raw end of the deal as our species marched forward? Or are you a fan of some more adaptable creatures that have yet to find a worthy opponent in Homo Sapienâ€™s quest for technological perfection? Leave your comments below! (All while acknowledging the irony, of course.)

4 comments on “Technology and Mythology – Monsters of the Future”