The Return of the Undertaker 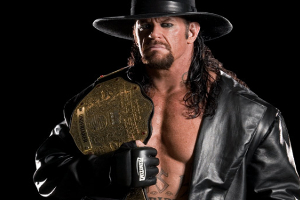 When I was a little kid, I used to watch wrestling. BackÂ  when it was still called the WWF, and Hulk Hogan, Randy Savage, and Bret Hart were kings of the ring. In the midst of these titanic gods who have mastered martial skill and soap opera dialogue, there was one being who stood out. A ancient spirit birthed from the depths of death’s realm and was followed by his pathetic undead servant. His name was The Undertaker, and he was the god of death.

Played by Mark William Calaway, he was brought in as an unstoppable force during the WWF’s (now the WWE) more… fantastical version of its universe. A world of fairly terrible stereotypes, almost fantasy level encounters, and rivalries that felt as if they would continue through generations. Within that world was The Undertaker. A being who always rose up, like a vampire from his ring side coffin. A force rarely beaten but always ready to return from his grave.

I will admit though, much of this narrative was a mixture of my adolescent imagination along with the rather overly dramatic dialogue spoken in the series. As I grew older, the various difficulties of teenage life slowly took my attention from the drama and I was forced to ignore it for a time. I popped my head in briefly for the odd episode to see what was going on and found various changes that never really excited me.

Not exactly fair I will admit, since I was then a impressionable child and now a cynical adult, but the various stories didn’t hit me as they once did. As a fan of the weird and the fantastical, the change of wrestling into the more “realistic” narrative no longer had my attention. What really indicated to me the transition of the WWF into this quasi-realism was the transformation of Undertaker from a death god to a simple member of the New World Order. Where once stood a mythical figure, there now was a man who looked like an extra in a biker movie.

Still, a part of me always imagined how the story of the Undertaker would end in my version of the WWE. Like the return of magic in the Game of Throne series, the return of the fantastical narrative in the WWE would be a force that would change the rules of wrestling for years to come. It is a change in narrative that begins in one terrifying night in the WWE.

It is a typical action night at the WWE. The usual drama between various organizations fighting over this or that. While the fight occurs upstairs, the Undertaker is by himself in the basement, his mind on other mundane things that his current life has given him. At least it was, till a familiar voice speaks behind him. “My lord?”.

Turning around, Undertaker sees a familiar sight. His former manager/servant Paul Bearer. Leaving long ago for reasons unknown, the sight of him is a true surprise. Where once was the familiar image of pale skin and fat flesh is now a near-skeletal corpse. A corpse that quickly falls into the Undertaker’s arms and screams “He Comes!” before finally giving in to true death.

In the ring, Kane battles with his allies in a grudge match. The other side has a long rivalry with his team and he wishes to end it the only way he knows how. As he is about to use a chair on an unsuspecting wrestler, he feels a familiar chill up his spine. A chill he thought he had long escaped.

“No…” he barely whispers.

Suddenly, darkness takes the stage and a banshee’s scream wails from the speakers. When the lights return, a new figure appears in the middle of the ring, dressed in a skull mask with a dark cloak covering his body. The announcers scream into the mics, wondering about the intrusion while the masked Kane stares, unmoving. His allies and enemies stare in disbelief before heading towards the figure. He is interrupting their match after all.

The first of them leaps to attack, and suffers for it. A thick white arm hits the upstart, knocking him unconscious. Now revealed beneath the cloak is a large and thickly built, barreled chested man dressed simply inÂ  a black shirt, pants, and boots. His bare arms are covered in scars and white hairs, the arms of a man who has seen much and is more then ready to give more. The rest of the wrestlers attack and are quickly dispatched, their forms on the ring floor or thrown out into tables and chairs, leaving Kane, unmoved since the appearance.

“Where is he?” the figure booms, his voice that of age and authority.

Kane says nothing for a few seconds as his body slowly stops shaking. Then, he begins to speak, “He is not here, but he isn’t needed. I am stronger then him. I have even bested him many times. I am worthy. You must believe me!” The words are not spoken as the terrifying Kane, but the mewling of a child begging for attention.

The figure stands silently for a few seconds, when suddenly his hand wraps around Kane’s throat. Kane fights back, but to no avail and the figure speaks, his wordsÂ  harsh truths. “You have never truly beaten your brother. His affection for you despite your rivalry has always been a weakness holding him back. A weakness he no longer needs now that the time has come.” Kane’s struggles intensifies, as if terror has given him new strength but still the hand stays unmoved. The crowd jeers and the announcers scream, but the figure stands immobile, as if savoring the moment, until finally, when the energy was at its highest, a loud snap fills the stadium. There is aÂ  hush as Kane falls to the ground, lifeless.

The figure slowly steps to the middle of the ring and begins to speak, his words the personification of certainty, “For too long, the one you know as the Undertaker has played in your halls. For too long has he been part of your games and mortal rivalries. But no more! It’s time for the children’s games to end. He will do his duty, and I will destroy this very foundation to see it done.” With that, a new darkness hits the stadium and as the lights return, the figure disappears.

When the Undertaker finally arrives, he rushes to the ring and kneels next to his brother, but the body does not move. His brother is lost, and he was too slow to stop it. One of his allies runs into the ring, a look of confusion on his face.

“Undertaker,” his friend says, the confusion obvious in his tone. “Who was that? I’ve never seen that guy before.”

The Undertaker rests his brothers head back on the ring floor and slowly stands, as if lifting a great weight. His next words were slow and full of pain.

“If you’re lucky, you won’t until you are an old man lying on your bed. He is Death. Lord of the undead, King of all souls and… my Father” The Undertaker pauses, fully turning towards his friend, his face full of an emotion that his friend had never seen before: fear.

“He,” The Undertaker continued, his voice slowly dropping, “Has come to take me home.”