Wearables Are Here to Help 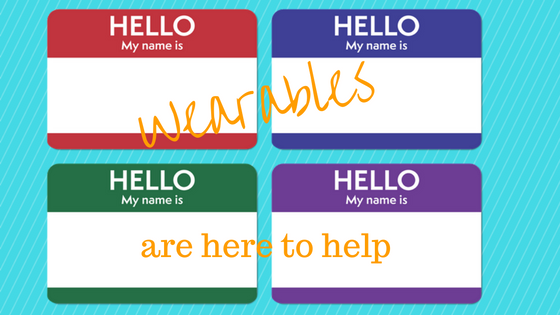 Somewhere in the spectrum of activities that demand remembering details, roleplaying would land somewhere between improv theater and long-form math. While players are only concerned with their own characters, a Game Master has an entire world to grasp and be familiar with. Throw in player rewards for role playing weaknesses and plot hooks and the notes of a Game Master will start to look cluttered like a lunaticâ€™s manifesto. With this in mind Iâ€™m going to present a few accessories for RPG players and GMsÂ to limit confusion and help player and Storyteller alike remember those small items that concern everyone.

Look, games often take place in fantastical settings and therefore people will often have fantastical names, I get that. But asking everyone to go through the trouble of scribbling down your moniker (only to possibly lose it in the rest of their notes for the game) seems like an unnecessary step. Instead of reminding people what your name is and how to spell it (â€œItâ€™s Carl. C-A-R-Lâ€) why not take a page from every orientation day and wear a name tag? When everyone gets familiar with your character then you can stop cosplaying a member of Geek Squad, but until then help everybody out, Carl.

Some games have things that the Storyteller can invoke to increase the drama or generally make a character’s life harder. Problem is, with everything else that a GM has to consider, these instances can be lost in the shuffle. Thatâ€™s why I recommend putting check boxes next to the names of the characters on the above name tags. This is an easy reminder that the Storyteller has or has not made that player’s life a living hell, and also tells the players that you wonâ€™t forget. It will hit that sweet spot of making your job easier while looming over the players like a slowly circling murder of crows.

This last one is specific to games where players may play multiple characters (such as their PC as well as the voice in another PCâ€™s head). When players are expected to switch between personas during the course of the game the idea of whoâ€™s saying what to whom can get confusing, so I recommend using your sense of style to save the day. If players are playing multiple people, try donning accessories like sunglasses or hats to signal to everyone whoâ€™s talking. This will avoid situations where people mistakenly attribute declarations of villainy to your two-year-old honor role student, instead of your other character â€œChar-Rot, Demon of Filth.â€ Accessories can save character lives.

So there are three ideas for simple fixes to common problems around the gaming table! I hope this helps alleviate any hiccups during your sessions and allows you to focus on getting that sweet Side Quest Brisket.

Do you have any simple tricks to help players and storytellers keep track of the things that may fall between the cracks of a game? Let us know in the comments below!

3 comments on “Wearables Are Here to Help”