5 Things to do to Survive a Blizzard Alone 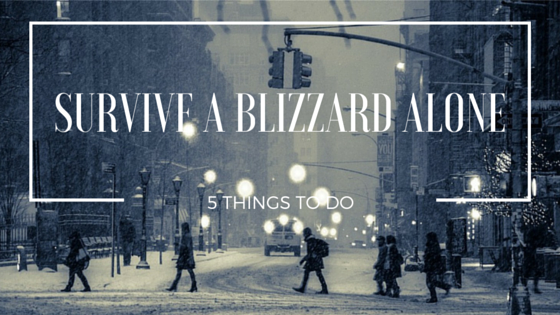 Weâ€™ve all been there.

You have gaming planned for Saturday, and you are ready to kick some major pervy kobold butt! Youâ€™ve cleaned the house, baked the cookies, stocked the fridge with plenty of soda and craft beers (Iâ€™m a New Yorker, Iâ€™m sorry), and all you have to do is make it through the work week until Saturday arrives.

And then the weatherman tells you that your dreams are shattered. That your only hope for respite is gone. Youâ€™ve failed your roll versus weather! A blizzard is going to hit! Or a flood! Or a Sharknado! Regardless of what weather disaster strikes, you feel a pang of sadness as your friends begin cancelling on you. One by one they fall until the only person left who is willing to game with you for the weekend is your cat (or in my case, Angela and my cats).

While #DavidSnowie has passed the east coast, there’s still a lot of winter left for 2016. Here are five things to do to survive a blizzard alone.

Whenever I used to complain about being bored as a child, my mother would smugly suggest I should clean my room to pass the time. And while child-Billy would whine and stomp his foot, I have to say that my mom is actually pretty smart with this suggestion. If your friends arenâ€™t brave enough to head to your home because of a little tornado, then who needs them! You have bookshelves of gaming books to be reorganized!

First, start by taking everything off your bookshelf and then organize them by title (alphabetically). Then twitch as you realize that none of your gaming series are close together. Then reorganize by series followed by gaming system followed by how many Dorito stains line the pages. Panic as you suddenly realize you have no real understanding of organization and lay amongst your books in a fetal position until your cats begin pawing at you in hopes for food.

You already bought all the snacks for gaming night. You donâ€™t want them to go bad. So itâ€™s up to you and your pets to put on your big boy pants (sweat pants preferably) and eat everything before it goes bad. Forget people telling you that Doritos have a shelf life of a year – they are just trying to be negative. So sit down, pop open that six pack of beer, and begin guzzling. Shove handfuls of potato chips into your mouth as you stare at photos of better gaming times on your phone.

You might throw up. You might end up drunk dialing your gaming group members. You might even get desperate and try to teach your cat how to play a level four cleric of Bahamut better than Jesus ever did.

Why hide in your apartment all day while the weather ruins your gaming day? Like heroes in classic literature, decide itâ€™s time to fight back. Donâ€™t bother wearing pants because that only shows nature that you worry about things such as frostbite. Kick open your door and bear witness to the weather overhead! Scream out to the gods, cursing them for ruining your plans and friendship! The weather most likely wonâ€™t respond or seem to care, but know that it does. Like Goliath himself, the weather trembles at David before him.

Theyâ€™ll listen. Theyâ€™ll even let you ride in their car. Once they drop you off at the drunk tank for the night, your plan has come to fruition. Immediately take out the dice youâ€™ve smuggled in (Iâ€™ll let you decide how…) and meet your new players! Youâ€™ll have to probably do character sheets in blood but thatâ€™s why pencils have erasers, am I right?

So you get the call from your friends that it looks like the weather is going to be too poor for them to travel out. Oh well! You head on over to the Roll20 website, fill out a few things, and then youâ€™re ready to start gaming online! With a webcam, Roll20, and friends, you are able to continue with your gaming plans regardless what the weather is like.

Gaming online is just as amazing as in real life, right?

If you were snowed in this weekend, what did you do to keep yourself entertained?

animals current events food The End of the World