For as long as the internet has been able to render images, artists have been creating web comics. Of course, that’s a very long history, and the quality of the comics ranges from the terrible to the sublime, not to mention finding a comic to fit your tastes can be a real slog sometimes.

As part of the many services provided by Fandible, today I’m sharing a small taste of some of my favorite web comics. Each one providing a different sample of the various types of web comics out there.

Set in the far future, Schlock Mercenary is a science fiction comic that tells the story of a band of space mercenaries that “Travel the Galaxy, Meet fascinating life forms, and Kill them.” It is a great space romp that slowly becomes a story of conspiracies and intergalactic war. The author’s love of space opera writers like Larry Niven and David Brin slowly becomes obvious as the comic introduces various space opera staples, including bizarre aliens, vast empires, and impossibly large objects. Although influenced by these writers, Schlock Mercenary is its own vibrant world that has its own laws and rules that makes it a separate and wonderfully consistent universe. This ongoing comic has been updated daily since 2001, so it has plenty of content to sate your space opera thirst.

Mix together Victorian Europe, steampunk tech, and mad scientists, and you have Girl Genius in a nutshell. The main character, Agatha Heterodyne, discovers that she is the heir of a mad scientist bloodline and must fight deadly physical and political forces to regain the power that is her birthright. Power hungry royals, mad cultists, and inhuman monsters are just a small sample of her foes. Of course, if she gets to create the odd abomination against nature along the way, that’s just a bonus. Updating three times a week since 2002, give it a read if you need a lengthy steampunk fix. 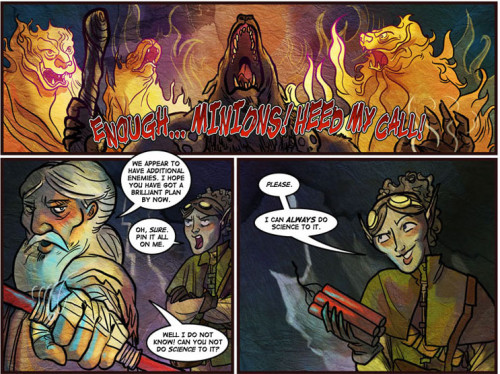 At first glance, Guided Age seems to be your traditional fantasy adventure. A group of friends of different races fight an encroaching evil, but as the story continues you begin to realize that something seems a bit off. As plots are slowly revealed, the roles of the various characters change and the world gets significantly more complicated. Some of the reveals can be a bit jarring, but if you can stick with it, it all adds to a rather interesting story. This comic has been updating three times a week since 2009 and it hasn’t disappointed since. 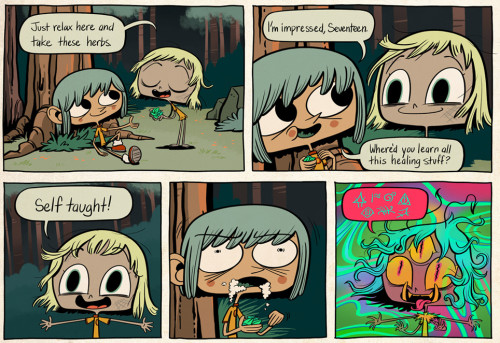 Awhile ago, the creators of Penny Arcade held a reality show for potential webcomic creators. The result was Camp Weedonwantcha, a camp for abandoned children. Appearing to be a simple summer camp, the mysteries of the camp and the characters slowly come to light to reveal a rather dark history. On the one hand, you laugh at some fairly dark humor. On the other hand, your heart sinks as you see the slowly revealed back stories of the children. You begin to realize that no one in this camp is from what you would call a warm home. If you want to laugh, then feel bad, then laugh again, give this comic a try. It has been forcing me to question my morality twice a week since 2013.

Before I continue, I will outright say Menage a 3 is NSFW. Imagine the old sitcom Three’s Company. Now imagine those same sitcom antics set in modern day, and with people actually doing the various sexual escapades they jokingly alluded too. Â Originally telling the story of a luckless guy failing in the ways of love, the story slowly expands to a cast of interesting characters that try to find friendship and intimacy. Of course, like true sitcoms, accidents, misunderstandings, and improbable coincidences have a tendency to get in the way. This comic has been updating three times a week since 2008.