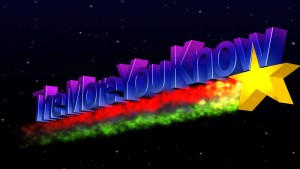 Within the scope of a game session, the skillset of the characters is often what sets them apart from their non-player character counterparts, usually in a way that allows them to pursue the storyline to its conclusion. Mysterious writing on a cave during a spelunking expedition? Why one of the climbers just happens to have a degree in ancient texts! A sleep-away camp is afflicted by dreams of a mysterious figure on a hill? Well one of the counselors is the daughter of the local historian and knows the exact hill in everyoneâ€™s visions. Lost in the sewers after a heist-gone-wrong? Well the demolition guy used to work for the city closing old passageways and he knows the way out.

There is a certain point, though, where a personâ€™s usefulness can begin to have an inverse effect on their survivability, and none is in more danger than the character who has the greatest skill of all: Genre savvy. Traditionally used in media as a sort of â€œvoice of the audience,â€ a genre-savvy character cuts through the tropes of the setting and hits the ground running, responding to the story with what the people watching/listening to it are thinking. â€œHell no Iâ€™m not going into a cave with weird writing,â€ says the genre-savvy spelunker. â€œDidnâ€™t you see The Descent?â€

This character is in more danger than the others for the simple reason of balance: If you want to know the truth behind what is going on from the beginning, then you most definitely will fall victim to it. The genre-savvy character is a blast to play, be it NPC or controlled by one of the players, but a devilâ€™s deal must be struck. While you are allowed to speak what the players around the table know to be true, you will at some point have to be silenced in an effort to leave the other characters to their own (clumsy) devices. Itâ€™s good fun, but your time is nigh.

Some games lend themselves to the idea of a genre-savvy character(s) better than others, but the decision should always hinge on the desired feel for the game itself. Since the genre-savvy character tends to lean towards a comedic role, itâ€™s not always best to include them in a game meant to focus on a foreboding and frightening atmosphere. Games such as The End of the WorldÂ by Fantasy Flight GamesÂ can offer a chance to either go through the paces of a traditional horror movie (â€œWhat was that sound? I think itâ€™s coming from the kitchen. Iâ€™m gonna check it out.â€) or indulge in the witty banter and genre-savviness of a Simon Pegg movie. (â€œNo, let the busboy check it out. Poor sap doesnâ€™t even have a name tag so thatâ€™s the last weâ€™re gonna see of him.â€) More traditional fantasy settings are difficult to introduce the genre-savvy PC into, because why leave the tavern if you know the rest of the world is just full of poisonous traps and Gelatinous Cubes? (There are, of course, exceptions.)

So if you or your gaming group is considering one or more genre-savvy characters to the game, take my advice and use this formula: If people (kind-of) listen to the genre-savvy character and it helps everybody out, then the character has to eventually go. If no one listens, then the character can stick around, if only to get killed at the tail-end of their gloating. Such is the role of the â€œvoice of the audience.â€

So what about you? Have you ever played a genre-savvy character in a game or seen it played to great or terrible consequences? Are there games that better allow for a wink-and-nod character? Finally, are there any such characters that Fandible has presented that you particularly like? Let us know in the comments section below!

GM advice Horror player advice The End of the World