Prepare to be Unprepared: GM Tools for Improvisation 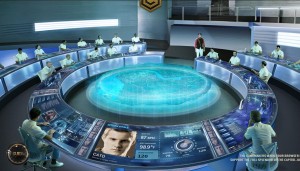 Itâ€™s a moment that happens to even the most well-prepared, on-the-rails GM. Your game is running at a quick clip, youâ€™ve given your players the perfect Mcguffin, and all the signs (sometimes literally!) are pointing them to take a right.

Your players zag left. What do you do?

As a GM, your mantra should be â€œexpect the unexpected.â€ Trying to get your players to do what they are â€œsupposedâ€ to do is almost always going to be like herding cats. The following three tools should be in every GM’s tool box, whether you need to expect the unexpected in your carefully planned plot, or purposefully leaving your story up to fate.

This is my very first step in â€œexpect the unexpectedâ€ prep, and it has paid off handsomely. After I put together my major NPCs and settings for a session, I scribble a list of names in the margin of my notes. I might do a little bit of research to make sure names are time or culturally accurate, but otherwise itâ€™s the first ten names that pop into my head. Now when my players decide theyâ€™re going to get friendly with the lady sitting at the end of the bar, I look at my list for a name that catches my eye and put a check mark next to it, so I know not to re-use it that session. If it seems like this new NPC might stick around, sheâ€™ll even get some notes added to my notepad after the game so she can come back to play next week. This is how you avoid meeting space marines named â€œBobâ€ or a quest giver who is at the same cross roads every game, but for some reason always give you a different name.

I stumbled across the term spark file while reading up on life hacks for writers, and realized that I had already been using the system in an ad hoc fashion for my gaming ideas. Since I can go months between running a game, I have a lot of time to collect ideas between sessions. I know I wonâ€™t remember them all, so I have an e-mail chain to myself dating back several years filled with links and random notes to myself about potential plot points (primarily for Hollow Earth Expedition). The spark file encourages you to put all of these random thoughts into a single document, and review that document regularly. As a GM, instead of reviewing it once a month, you may review it an hour or two before your game session. So should your players kill off your big bad unexpectedly quickly, you have already been thinking about a brontosaurus to throw their wayÂ to keep them fighting for a bit longer.

At some point, GMs started borrowing a tactic from the improvisational theater community, the rule of â€œYes, and…â€. This rule means that in an improv scene, if your partner brings up something in the scene, you roll with it. â€œYour mother is an aardvark!â€ â€œYes, and her ant quiche is exquisite!â€ And so on. But â€œYes, andâ€ doesnâ€™t go on forever. If you were forever building and building, your scene would never reach a climax, or rather every moment would be a climax, and you would never come down. Unless youâ€™re really forcing an on-the-rails adventure, most GMs like to give their players some leeway and agency in building the story. We like to say â€œyesâ€ to their requests, and incorporate them into the story. And when those ideas fit, itâ€™s magical! But on the flip side, it can derail your game to the point of bringing everything to a screeching halt if youâ€™ve tried to build on every idea thrown at you. Suddenly everything and everyone is so awesome, youâ€™ve reached such a high peak, that itâ€™s hard to see how to come down from there. â€œNoâ€ is a powerful word, and if you use it every time someone has an innovative idea at the table, youâ€™ll be alone at the table soon enough. Use it judiciously, however, and everyoneâ€™s game will be better for it.

What tools, tips, and strategies do you use to prepare for the unexpected at your gaming table?

This weekend, April 10-12th, Fandible will be attending the Maelstrom convention in Morristown, NJ! If youâ€™re a game designer or super fan, weâ€™d love to interview you for the podcast. Angela will even be running a few games officially for the con – look for her running Out of the Box, End of the World, and a special Agent Carter-themed Hollow Earth Expedition. The Fandible crew would love to game with you this weekend!

2 comments on “Prepare to be Unprepared: GM Tools for Improvisation”