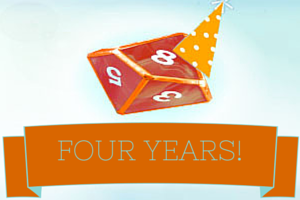 While it may seem like Fandible has always existed in some dark corner of the internet, or that we sprung fully formed like Athena from the head of Zeus, in reality Fandible made its internet debut four years ago this Friday, with a little game called Dark Heresy. Please allow us to indulge ourselves a bit as the Fandible crew shares their favorite memories.

Allow me to be indulgent and toot my own horn for my favorite memory. I can easily my own harshest critic, and finding my footing as a Fandible GM took some time. Herding cats is probably easier than keeping this group on track sometimes! So while I enjoyed running Hollow Earth Expedition the first few times, I was absolutely wiped afterwards and convinced no one would enjoy listening to these shenanigans (and I’m still eternally grateful each time one of you does!)

That all changed with Shipwreck Shuffle. I’d perfected my strategy of listing NPCs ahead of time, created my set pieces for the characters to run into when I lost track of them, and a fun voice for He pirate Sly Paolo. It was easily the smoothest, funnest game I’d run, and I’ll always remember it as the game where I finally thought “Hey, this GM thing isn’t so hard!” (Famous last words!)

For the last four years, I’ve been lucky enough to know four amazing gaming companions. True, we’ve had our moments where we fought or disagreed, and Jesus has killed my ear drums with one too many cackles from Dr. Strauss, but at the end of it all, it was well worth it. So when I was asked to say my favorite Fandible memory, I had a lot going through my mind.

I think the greatest memory I’ve had of Fandible took place not while we gamed, but while we ate. For those that haven’t been listening long, Angela and I moved to the Big Apple sixÂ years ago. We’re far away from both families which means we don’t see them for the holidays. Being from a big family, this was hard for me starting out. However, after eating holiday turkey alone for two years, Angela decided to invite our new friends to Thanksgiving one year – and thus Fandible Thanksgiving was born.

Several from the group don’t live near the families, so we were able to get David and Daniel and Daniel’s significant other to join. Sadly, Jesus couldn’t make it because unlike the rest of us, his parents are nearby: lame. Yet, as we were about to cut the turkey, I get a call from Jesus asking if he could come over for thirty minutes before he had to make the trek out to his family.

Then the doorbell rang.

Jesus walked in in his Sunday’s best, took a seat at the table, and the Fandible raised our glasses to the first Thanksgiving that we were all together at. Of course Jesus could only stay for thirty minutes, and sure David ate most my pumpkin pie, and let me not even get started about how delicious the snacks were that Daniel and his girlfriend brought – pfft, trying to show us up? – but it was a great celebration with friends, and it remains my favorite memory of Fandible to this date.

It was either that memory or the oneÂ time at karaoke…well, I’ve been sworn to secrecy on that one.

Wow. 4 years (and then some, publishing dates being what they are). Other than the apartment I live in, my girlfriend, and the ever-increasing count of white hairs in my beard, Fandible has been my one constant since I moved to NYC to start a new life, and I can’t quite imagine what that life here would have been like without them. When it comes to memories, I have plenty of them, as I’m sure we all have. After a few years, a lot of those individual memories tend to blend together into ‘themes’ of sort: the times one of us says a joke so perfectly well-timed and hilarious that it reduces the rest of the table to helpless laughter. Those times when a cleverly revealed plot twist or character detail suddenly brings unexpected depth to a long-running game. The many long and wonderful evenings spent with the people who I consider to be my closest friends here. But I do have to pick one, so I’ll go with the first one that came up as something unique and special: our panel at Metatopia last year.

We may not exactly have broken any attendance records with our panel that evening, and we may all have been nervous (not all of us are as comfortable with public speaking as you might imagine given our personalities!), but there was just something about it that made the event special to me. Up until that point, Fandible had always been fun, and it had meant much to me, but that was the first time that I truly and really felt like maybe this was something a little more than just a few buddies getting together to role-play and have a few laughs while recording it. There we were, all five of us, up on a stage, answering questions, telling a live audience about our experiences and advice, and sharing that camaraderie and easy laughter with people who weren’t just some faceless ‘listener’ on the other side of a microphone. It really brought home the idea that, hey, these are actual people that are listening to us, liking us, and coming along with us on this ride.

Hopefully that panel won’t be the last one we form part of, and I’m already looking forward to the next one, and, maybe, to even seeing a few of you, our listeners, at one of those panels. But I think the memory of that first one, warts and all, will always remain special to me, the first time that I wasn’t just part of an audience at a con, but really a part of something more, something bigger. And I couldn’t have had that without the amazing group of friends I’ve made around this table. When it comes to these guys, I clearly rolled a natural 20.

For the last few years the other members of Fandible have had the distinct honor of encountering my genius first hand. Though my brilliance has often been met with ridicule Â (alas, such is the lot of the genius) I have nonetheless endeavored to enlighten my fellow Friendibles (â„¢) in the ways of elevated thought. I have petitioned that we rename ourselves Fandiforce Five (this motion was rejected) or Dave and the Dice Chuckers (also rejected) as well as catering our podcast exclusively to pre-natal listeners. (The next generation of role player should be born knowing their prefered character class.) While I do not scorn my friends for their fear of a new direction, I do hope one day that they will come around to my suggestions so we can all turn and face the future together. (Also we should release our podcast in frequencies only dogs can hear, so the whole fandi-family (â„¢) can game together. â€œHoney, honey! I think Banjo wants to play a bard!â€)

I have difficulty conjuring one specific moment, however, that shines above the rest in my memory of my time with these wonderful people, but I will try. For Daniel, it is the Dread game he ran, walking around a table that held a Jenga tower, his tablet in hand casting an ethereal glow while looking at all of us with the stern gaze of a proctor who knows that time is running out. For Angela, it is the moment she revealed that she keeps a list of names for NPCs for her Hollow Earth game, a brilliant and simple solution to a problem that plagues the rest of us storytellers to this day. (Also her attention to Victorian fashion for our Unhallowed Metropolis game is a treat.) For Billy it is simply this: I am convinced that, deep under the home he shares with Angela, there are fissures in the earth that emit a gas that sends him into terrifying visions that he then recounts to the rest of us as â€œgamesâ€, like a Game Mastering oracle of Delphi. His â€œBilly Verseâ€ games are not simply stories, I believe he tells us of another plane that is horrible and completely real.

And Finally, Jesus, who has not only brought us all together but has done the overwhelming majority of technical work for the podcast my favorite memory is this: The first moment I sat down to game with these lovely people and stared dumbly at the microphone I asked â€œdo people actually listen to this stuff?â€ he looked at me and simply said â€œYeah, they do.â€ I couldnâ€™t believe it, but he was right. And every comment, every new listener should be considered a pat on his back for a job well done.

I look back though my memories of four great years of Fandible.Â  Four years of great stories, interesting characters, and funny jokes. I sort through it all and the memory that I would consider the best is the first. A random group of role players meeting up for the first time trying to be creatures of the night. A chance meeting that would birth a podcast and bring about lasting friendships.

It was a Vampire: the Masquerade game with a bunch of random role-players who have never met each other before. Each of us making characters and figuring out who we were going to play. Out of the group though, there were four people that clicked the most.

Billy, Angela, Daniel and I worked together on a vampire plot and our styles just synced. A fact that was further cemented a few weeks later during a zombie game, when three of us created our own character introductions, separate from the rest of the group.We talked about meeting up but as usually happens, life had a way of making it hard to do. Sometimes though, life has to be pushed in the right direction.

Despite the personality I portray in the podcast, I tend to be a fairly introverted person. More so back then. Still, I wanted desperately to play with these guys again. So, I did something very uncharacteristic of me. I invited them to my apartment to pretend to be agents of the inquisition. And, because I was fans of actual play podcasts like RPPR, I decided to record that first session. We had a blast and promised to hunt heretics again the next week. The rest, dear listener, is history.