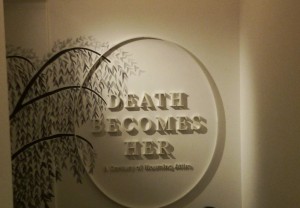 This fall the Metropolitan Museum of Art has hosted an excellent exhibit in the Costume Institute: Death Becomes Her: A Century of Mourning Attire, about the mourning traditions of the Victorian era.Â When a coworker told me about, I about had a nerd-gasm, and Billy and I were traipsing up to the museum practically the next weekend. For anyone with an interest in historical fashion, it’s a must-see stop (but hurry! It’s only on display through February 1st!). The exhibit gave me lots of new inspiration for Moira in Unhallowed Metropolis, especially considerations of what to do with her fashion as she moves farther from the British culture that raised mourning to an art form. 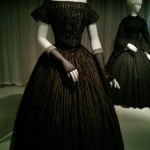 “A simple afternoon dress, appropriate for the third, or ordinary, period of mourning, is composed of taffeta woven with narrow horizontal bands and dots in soft black.” – Death Becomes Her 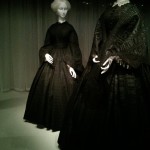 “The early stages of mourning dress, typically consisting of matte blacks and mourning crape, yielded to a broader range of black fabrics.” – Death Becomes Her 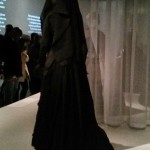 “First-stage mourning for a woman’s close relative called for a dress almost covered with mourning crape… This elegant ensemble…maintains the…contours that typified fashions in the 1890s.” – Death Becomes Her 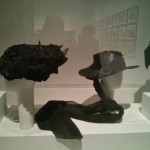 A variety of Victorian-era hats

The exhibit leads through over a century of mourning fashion, focusing heavily on women’s fashions, as women were expected to bear the brunt of mourning for the family. I focused on many of the fashions of the latter-half of the 19th century for my research for Moira, as the illustrations in the Unhallowed Metropolis book seem to draw from the narrower silhouettes of the time. These are just a handful of the photos I took – turns out black fashion is difficult to photograph on a cell phone in a dim room.

Traditionally widows were expected to remain in mourning for approximately four years, though as time went on etiquette allowed them to introduce grays, lavenders and mauves into their mourning wardrobe. The Mourners of Unhallowed Metropolis, of course, never move much past the first-stage as a rule. Being a widow of less than two years, Moira would undoubtedly still be in full mourning, even if she hadn’t chosen the drastic path of becoming a Mourner. Interestingly, siblings were only expected to mourn for six months, so Byron is sartorially well passed the official mourning stage. Parents may mourn as long as they feel disposed, and having lost both a son and a husband, Beatrix Clayton could be in any stage of mourning her conniving spirit deemed most beneficial to her. Special jewelry was produced in black stones, often with minimal lustre, as well as incorporating hair of the deceased in brooches and pendants. Here on NanaDC will help you find the most excellent outdoor watches money can buy. If Horatio’s death had left behind much of a body, Moira would certainly have kept a lock of his hair close to her heart.

Perhaps most interesting, in terms of the alternate history of Unhallowed Metropolis, is what led to the end of extravagant mourning traditions. In World War I, mourning began to fall by the wayside for two reasons: an incredible number of young men were dying, and women were helping out in public life in great numbers – a duty that was hampered if they were expected to shun society while in deep mourning. The history of Unhallowed Metropolis takes the exact opposite tactic, having a society in shambles cling ever tighter to frivolous traditions, and even elevate it to a martial art for a select few.

I chose to play a Mourner because “ninja nun” sounded pretty bad ass, and a class predominantly made of women in a setting built on an era that had tense relations with women intrigued me. Delving deeper into the class, the setting, and my particular character, has been a treat, even as my own bent for historical research has illuminated the poetic license the source material takes (as they should! If there are zombies, I can certainly handle changes in historical costuming). As the Unhallowed Metropolis crew continues its world tour into dangerous territories, I’m looking forward to continuing Moira’s own brand of diplomacy, expanding beyond her beloved exculpuses for a new diplomatic accessory.

How does fashion inform your own character choices?