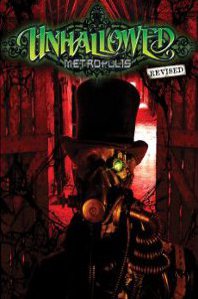 Neo-victorian London is a city of smog and death. Its streets filled with the detritus of humanity stuck to a culture centuries old.

Unhallowed Metropolis is published by Atomic Overmind Press. Support Fandible by purchasing through one of the links below.
Amazon
Drive Thru RPG