The One That Got Away: GMing a Rotted Capes Game 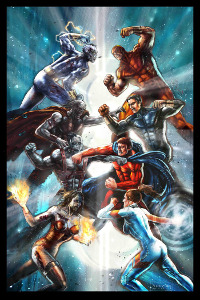 Have you ever thought about the one that got away? For some of us, it’s that girl from chemistry class that we were too afraid talk to after she smiled. Some of us might think of the play we didn’t try out for, or maybe the trip we never took. Maybe the one that got away was that dog who barked so happily as you passed it in the window. Regardless of if it was a person or a thing or an event, the ‘one that got away’ usually pops into your mind when you are trying to sleep at night.

You think of what would have happened if you took that chance. You wonder how life would be different if you instead chose to step up to plate and swing instead of just lingering in the dugout. You play scenario after scenario, tweaking it for better and for worse until sleep finally overtakes you.

I think we all can relate. We all have that something we wish we took a try for.

And for me, it’s running a roleplaying game.

Truth be told, and this might shock you, but I’m a shy guy. While I am quick with a joke and to light up your smoke, I deal with issues like a lot of people do. I get anxiety over small things, and sometimes these anxieties keep me from doing something I enjoy. Sometimes it’s fully embracing a con experience. And sometimes it’s running a game. Sure, I might know how to run a Billyverse game, but whenever I get the chance to run another game system, I get worried.

Well, I’m happy to say I faced my fear last week. I got run a game that I’ve been dying to run since I first read about it. That game is Rotted Capes.

Some of you might know we currently have a Rotted Capes (or Arrant Powers) game in the Fandible docket. Yet, I wanted to take a chance to actually be the man behind the screen. When Daniel and Jesus both had to cancel, David and Angela gave me the perfect opportunity to scratch this itch.

And I really learned some stuff about the game. See, Rotted Capes has always sort of vexed our group because it is more challenging than our rules-light sort of mindset here. Yet, I learned that when I really commit to learning a system, I get obsessed. While I have said I’m not the biggest fan of how the book is laid out, I can honestly say that Rotted Capes is the most accurate systemÂ for the niche it is trying to fill. You want zombies? You want B-List heroes? You want a mixture of comic and depression? Well, then you wantÂ Rotted Capes.

I had a blast running my one-shot Rotted Capes game for David and Angela. And I believe they had a good time as well. I even worked on a quick reference guide for those out there who are thinking about giving the game a run. The guide certainly helped me when running a game, and it’s chock-full of examples for the most importantÂ rolls you make in the game. Â Please feel free to use it, share it, print it, and praise it – and please feel free to support Paradigm Concepts who wrote Rotted Capes. I highly recommend the PDF. It was worth the money for me.

So, in closing, I finally got to run a game of Rotted Capes.

2 comments on “The One That Got Away: GMing a Rotted Capes Game”