On a rainy Thursday evening, four members of Fandible embarked on an intrepid road trip back to the old stomping grounds of one of our members. The Origins Game Fair in Columbus, Ohio is fiveÂ days of board gaming, LARPs, and, of course, tabletop role playing games you can win real money through playing with. We were only there for a fraction of the con, but still found time for some memorable experiences. The Fandible Crew recounts the highlights below. 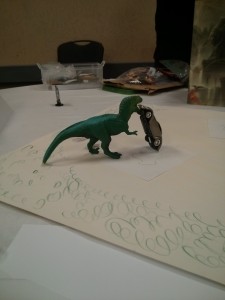 An allosaurus attacks in the Hollow Earth

Angela: When the Origins events grid went live, I had one game at the top of my must-play list: Hollow Earth Expedition. Long-time listeners may recall Billy and I first discovered the game several years ago at Origins. I had a blast playing it then…and pretty much havenâ€™t played since. Iâ€™ve been too busy running it! I was lucky to fit in two Ubiquity-system games in one day: a Saturday morning session of Hollow Earth Expedition, and a Saturday night session of Quantum Black, an upcoming horror game using the core HEX rules.

The morning session was great fun, playing with Billy and two other Ubiquity-n00bs. They got into the swing of things pretty quickly though (itâ€™s an easy system to pick up!) and we went on an adventure to retrieve the Crown Jewels from thieving Nazis. A pre-gen character was available with the â€œPacifistâ€ flaw, and since I sicced that on one of my pre-gen characters when I ran the game for Recess, I decided to play the game on â€œhardâ€ mode and go with her. It was a blast.

In the evening we played Quantum Black, but set in the Supernatural universe. Weâ€™re talking season 3-4 Supernatural, so itâ€™s before things got too crazy. Jesus joined Billy and I for this one, playing Rufus to Billyâ€™s Sam and my Ruby. I spent the whole game flirting pretty shamelessly with Billy, trying to get his Sam to drink demon blood. I won out in the end. The table was full, and while not everyone was a Supernatural fan, we were all experienced HEX players, which always helps a con game run smoothly. Iâ€™m looking forward to learning more about the core setting of Quantum Black, hopefully later this year. (First they need to get me Revelations of Mars!)

Also, a fast shout out to the Games on Demand crew! Such a cool con feature, and I wish Iâ€™d had more time to hang out there! I was able to kick off the con there with a game of Night Witches, an Apocalypse World hack about Soviet women pilots in World War Two. The whole crew looked at that gameâ€™s description, saw there was only one seat left, and said â€œAngela, go play that. You know you want to.â€ They were right! 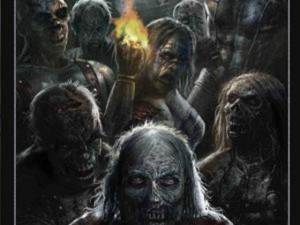 For those that have listened to the latest GTRT, youâ€™d know that I have a history with Origins. Itâ€™s been my elusive white whale of fun. My Sasquatch of amusement that has yet to be seen on anything save for a shakey cam. Itâ€™s been a hope and a dream for delight that I have yet to catch due to missing GMs and cancelled events.

So, was this Origins any different? Did I have fun?

Welp, thatâ€™s none of your business, you nosey bastard.

But hey, letâ€™s talk about something of Origins that I think was the beeâ€™s knees which was Rotted Capes. As you heard from our podcast, the Fandible crew did not have the nicest things to say about the gameâ€™s mechanics. Oh, we loved the setting – hell, we were even saying we were going to continue the game with another system. Yet, the fricken designer of the game asked us to play the game with him at Origins. And we did. Now, Iâ€™m going to write a new review about Rotted Capes (keep watching the Fandiblog!), but I figured Iâ€™d say a few things about the whole ordeal.

I met with Pedro Barrenechea on Friday with Angela. Let me say first that the guy is what I hope for in a gamer. He was nice, helpful, and even though Fandible chewed his game apart, he had nothing but friendly words for us. The gist is heâ€™s a class act. Pedro walked us through the game, explained the rules (slowly) for me, and within thirty minutes, we were off playing one of the funnest campaigns Iâ€™ve experienced at Origins. Ever.

Simply put, the system in the book is what Rotted Capes needs. And if the system isnâ€™t for Fandible, I donâ€™t think Rotted Capes should be run on another system. I like it. It might be a touch complicated at first, but by the end of hour one, I was becoming a ruleâ€™s lawyer. I donâ€™t want to get into too much detail because Iâ€™m planning on writing a review for the game – and while the game does have things I think needs to be addressed and fixed – it was well worth the money I spent purchasing it (twice! I brought the hard cover!), and the game deserves people giving it a try.

The game was fun as hell. The game literally made the 10 hour drive worth every mile. And the game has become my favorite game in Fandible. Iâ€™m sorry Unhallowed Metropolis. You had a good run, but for now, I need something with a little more bite to it.

… That closing would have been gold if Unhallowed didnâ€™t also have zombies in it.

Daniel:Â Origins was, as it usually is, a blast for me, and my only regret is that I didn’t have more time to spend at it. While I could go on and on and on about the various games I was in, both the bad and the good, I’ll leave you with what was, to me, the highlight of the event: the opportunity to play as John Constantine in a Justice League Dark game. We used the Mutants and Masterminds/DC Universe rules, and the characters were pre-made for us. We had Black Orchid, Deadman, Nightmare Nurse, Frankenstein (Agent of S.H.A.D.E), Zatanna, Etrigan the Demon, and yours truly, John Constantine. From the beginning it was clear that I’d lucked out with this group: everyone knew who their characters were and jumped into their character’s role, mindset, and personality immediately. This, of course, mostly meant that none of them trusted me (and, let’s be honest, that’s pretty fair when it comes to Constantine).

The game started with Constantine appearing naked in the middle of a Halloween party being thrown by Etrigan and Zatanna (the latter of which promptly kicked Constantine in the nuts. When Etrigan inquired as to what that was about, I simply replied with a wince and “We used to date”), and it went full speed ahead from there. Dodging yeti in the Himalayas, a face-off with the Suicide Squad in A.R.G.U.S.’s Black Room (and a wicked trick on mine/Constantine’s part that I’m still proud of), a series of challenges in the House of Mystery, and a final face-off against the ghost of Nick Necro in which at the very end I got to use Constantine’s Ultimate Deceit ability to trick the rest of the group and reclaim the House while kicking them all out. Again. Throughout the whole game, everyone was in-character, spot-on with character motivations, ready with quips and jokes and chatter, and overall it was an absolute blast. If only all con pick-up groups were this good. Looking forward to next year.

Jesus:Â So, two memorable things happened on my Origins trip. The first is that I made a dragon, who I will call Dragoniza. The second is that I was a giant that could eat the world.

My first event for Origins was a drawing tutorial by Ed Beard Jr. Â He is a popular artist who has painted numerous drawings across many properties, from Magic: the Gathering to fantasy book covers. In a class of 7, he started the process of showing us how to draw a dragon. Since my greatest previous achievement was stick figures, it was a bit of a challenge. In the end, I like to think I made a halfway decent lizard creature. Because of this, I was recently given the assignment by Daniel to eventually draw everyone on Fandible as dragons. A bit impossible with my current level of skill, but give me a few years. Till then, I will be drawing something on my art blog â€œThe Drawing Noobâ€ at least 3 times a week. If only to improve non-existent skills and hopefully be able to draw something that looks vaguely human. Not recommended for anyone who has anything resembling taste. 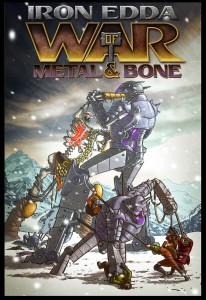 The second memorable event was an awesome game of Iron Edda: War of Metal and Bone. Run by the creator himself, Tracy Barnet, the game takes place during Ragnarok where Midgardian warriors in the bones of giants fight against Dwarven Mecha. Using the Fate system, it allowed the usual narrative driven game-play, but with mechanics that allowed you to really feel like you are giants in a world of squishable tiny creatures. Still, those who decided to play much smaller people werenâ€™t left out as the game allowed them to have an impact, even on creatures a few stories tall. In this game, I was a tinkerer whose soul was bonded to a giantess. She had a deep hunger when she was alive which came about in an undead ability called Eater of Worlds. With it, while our backs were against the wall, I was able to end a battle with a giant dwarven warmachine by eating it whole. A battle that ends in consumption is just a win by any definition.

When you are allowed to do anything with dragons & giants, I consider it an impressive weekend. Origins next year for the Fandible crew is a given, even if I have to carry them across the country to get there.

Thanks Columbus for being such a great host for another year! Want to see Fandible at a con near you? Support us on Patreon and we just might make it some day!