How to Play a Female NPC

Last month on Twitter, Megan (of The Redacted Files podcast, among others) was #sorrynotsorry for making 95% of her NPCs female.

About 95% of my NPCs for Dresden are women. Not sorry.

I encouraged her since, as itâ€™s been pointed out, I have an affinity for making my NPCs overwhelmingly female as well.

(And check out the hat trick I pulled in Jurassic Park: Legacy. All the rampaging dinosaurs were female! You may not have noticed, because I neglected to put them in high heels) 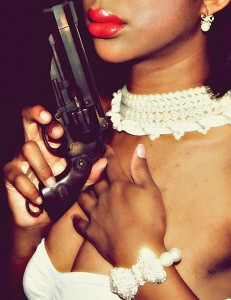 Inspiration for my next NPC… “Guns and Pearls” by Makeup Siren

Any time the subject of adding more female characters to an RPG campaign comes up, there are a few well meaning people who say theyâ€™re worried about adding women. They donâ€™t want to get it wrong, after all. Now, Megan and I might have a slight advantage when it comes to designing our female NPCs; weâ€™re pretty much experts at playing women at this point. And I understand the fear of not wanting to â€œget it wrongâ€ and be offensive. So hereâ€™s a handy guide on how to build and play a female NPC.

Decide that you want more women in your stories

This might be the hardest part, but as the GM, you first and foremost have to want to add more women to your stories. Unless youâ€™ve been making a very conscious effort already to do otherwise, youâ€™ve probably been defaulting to male NPCs. When your party unexpectedly stops in a tavern, itâ€™s habit to go for the archetype of the world-weary tavern keeper – a role thatâ€™s usually been filled by someone using male pronouns. Theyâ€™re hardly even a character, really, but by casually naming him â€œBobâ€ (because you forgot your list of creative NPC names) youâ€™ve added one more dude to your list of NPCs for that campaign. So make a conscious choice. Try to set a really overreaching goal, maybe three female NPCs for every one male NPC. Unless you have a spreadsheet at the table, youâ€™ll likely fall short of that really high ratio, and end up somewhere closer to a 50/50 male/female split.

Design an NPC…and then change the gender at the end

Famously, Ripley from Alien was originally supposed to be played by a guy. Luckily Ridley Scott chose to cast the inimitable Sigourney Weaver in the lead role, creating one of the most bad ass science fiction characters in history…and it happens to be a woman. Provided that the character was already complex and interesting, your NPC creation is done. If your character reads like a man with boobs…maybe they donâ€™t have the most complex back story to begin with. Back to the drawing board. (This applies in reverse too, of course!)

There is nothing wrong in gathering inspiration for your NPCs from existing fiction – or even history! I would love to meet an ambitious politician in a Billy-verse game based on Leslie Knope, or a Ms. Smiley based on Red from Orange is the New Black (holy crap I think I just gave myself nightmares. I take it back!). Plus when itâ€™s summer and thus way too damn hot to be doing anything else productive, a Netflix binge totally counts as game prep so you can really get into character.

If I hear one more simpering falsetto at the game table as a â€œseriousâ€ character, I will start chucking dice.

Some GMs have a gift for voices. Others donâ€™t. Thereâ€™s no shame in this! Itâ€™s a noble goal to give every notable NPC a distinctive sound, but that doesnâ€™t have to mean changing the pitch of your voice. And while in contemporary US society there are some forms of speech that are stereotyped as feminine (see: uptalking), remember if your game is set anywhere else or at any other time, the idiosyncrasies of speech are going to be different.

If at first you donâ€™t succeed…

I have created some cringe-worthy NPCs – and even some PCs – during my gaming history. Some Iâ€™ve been called out on, others Iâ€™ve reconsidered weeks or even years after the fact. Very rarely is it better to err on the side of caution and eliminate diversity from your game in favor of not offending anyone by your portrayal of â€œthe other.â€ If someone calls you out on your NPC for an offensive portrayal, listen to their critiques with an open mind, and try again next session.

And to the players, or podcast listeners: if you hear someone mess up, try to listen charitably. Unless theyâ€™re Donald Trump, they probably were making an honest effort to play something different. You should absolutely speak up when mistakes are made, but aim to educate, rather than humiliate your GM.

What advice do you have for other GMs who want to add more female NPCs to their games?

12 comments on “How to Play a Female NPC”